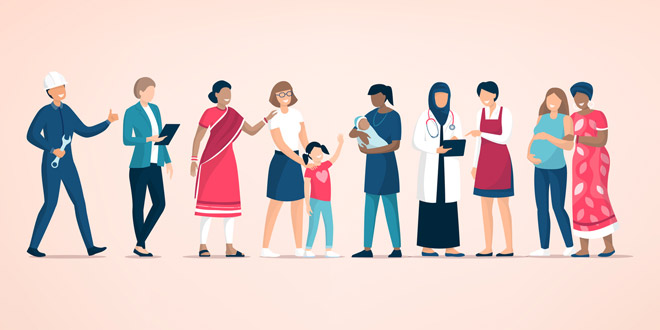 New Delhi: International Women’s Day (IWD) is celebrated every year on March 8 to commemorate the cultural, political, and socioeconomic achievements of women. While its significance differs from place to place, being a day for fighting for gender equality in some countries whereas in some countries it is a day to celebrate the accomplishments of women. Here are some important things to know about International Women’s Day 2022.

Every year, women’s Day is celebrated with a unique theme. This year, UN’s theme for International Women’s Day is ‘Gender equality today for a sustainable tomorrow’, with an aim to highlight the contribution of women and girls around the globe, who participate in their communities promoting climate change adaptation, mitigation, and response, in order to build a more sustainable future for all.

Women are increasingly being recognised as more vulnerable to climate change impacts than men, as they constitute the majority of the world’s poor and are more dependent on the natural resources which climate change threatens the most. At the same time, women and girls are effective and powerful leaders and change-makers for climate adaptation and mitigation. They are involved in sustainability initiatives around the world, and their participation and leadership results in more effective climate action, says the official statement by the UN Women for IWD 2022.

Without gender equality today, a sustainable future, and an equal future remains beyond our reach, it adds.

Also Read: A Victim Of Poverty Herself, Ishrat Bano, An Anganwadi Worker In Jaipur Is Committed Towards Welfare Of Children In Her Area

Facts About Women and Climate Change by UN Women

2. Women predominate in the world’s food production, 50-80 per cent, but they own less than 10 per cent of the land.

3. 80 per cent of the displaced by climate-related disasters and changes around the world are women and girls.

4. Climate change may lead to more gender-based violence, an increase in child marriages, and worsening sexual and reproductive health.

5. Violence against women has worsened due to the COVID-19 pandemic.

Also Read: “I Have Never Owned Underpants, So How Could I Use A Sanitary Pad?”

In 1975, the United Nations celebrated International Women’s Day on March 8th for the first time. Since then, the UN has become the primary sponsor of the annual event and has encouraged countries around the world to embrace its goal of celebrating ‘acts of courage and determination by ordinary women who have played an extraordinary role in the history of their countries and communities.’