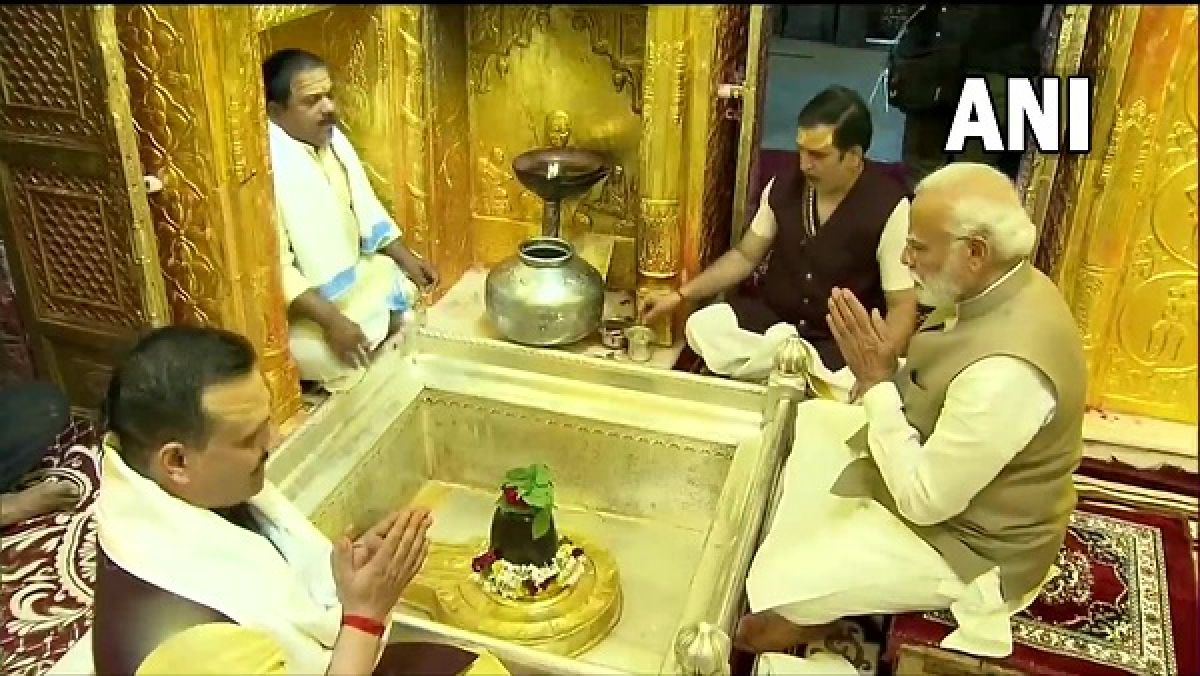 Varanasi (UP), Mar 4: Crowds cheered and showered flower petals on Prime Minister Narendra Modi’s cavalcade as he held a mega roadshow here, drumming up support for BJP candidates ahead of the last phase of the assembly polls in Uttar Pradesh.

Modi stood in an open-roof vehicle as the convoy travelled over three kilometres through the holy city, part of the prime minister’s Lok Sabha constituency.Two security men stood behind him. The crowd chanted “Jai Shri Ram” and “Har Har Mahadev”, and showered rose petals at several places as Modi waved to them or folded his palms in a ‘namaste’. The PM wore a saffron cap and a “gamcha” (towel) around the neck.

Crowds followed Modi all through the roadshow and many people stood on balconies and rooftops, waving at him. Modi arrived in the Varanasi Lok Sabha constituency after addressing a rally in neighbouring Mirzapur, on a two-day visit before the polling on March 7. Other political heavyweights also headed towards Varanasi on Friday. Samajwadi Party leader Akhilesh Yadav was scheduled to conduct a roadshow late evening, and Congress leaders Rahul Gandhi and Priyanka Gandhi held a rally in the district.

Modi began the show after garlanding a statue of Sardar Vallabhbhai Patel at Maldahiya crossing. The convoy covered three kilometres before the PM visited the Kashi Vishwanath temple where he offered prayers. He then left for Lanka chowk where he garlanded the statue of Madan Mohan Malviya, ending the event. At Lahurabir, some devotees welcomed the PM by chanting hymns. And at Kabirchaura, people danced as devotional music played. Modi had begun his first roadshow in Varanasi from the same spot after filing his nomination papers for the 2014 Lok Sabha election.

#WATCH PM Narendra Modi enjoys chai at a tea stall during his roadshow in his parliamentary constituency Varanasi pic.twitter.com/bVN73HvdDT

He performed the Shodashopachara puja to lord Shiva, priests said. The prime minister will wind up his Varanasi trip on Saturday — the last day for campaigning according to Election Commission guidelines — with a rally in Khajuria village in Rohaniya assembly constituency.

People from the other five assembly segments under the Varanasi parliamentary constituency will also participate, Rai said. During an earlier stay at the DLW guesthouse, Modi had written in the visitors’ book that it reminded him of his childhood days when he used to sell tea at Vadnagar railway station in Gujarat.

After the mega Modi event, Varanasi was set to see Samajwadi Party chief Akhilesh Yadav’s roadshow from 8 pm to 10 pm. SP’s Varanasi district president Vishnu Sharma told PTI that earlier they had sought permission from the district administration to hold the event from 5 pm to 10 pm. Congress leaders Rahul Gandhi and Priyanka Gandhi Vadra also landed in Varanasi Friday and headed to Phulpur middle school grounds for a rally after praying at the Kashi Vishwanath temple. The two reached the venue after holding a roadshow of their own in support of Congress candidate Ajay Rai from Pindara assembly segment. PTI