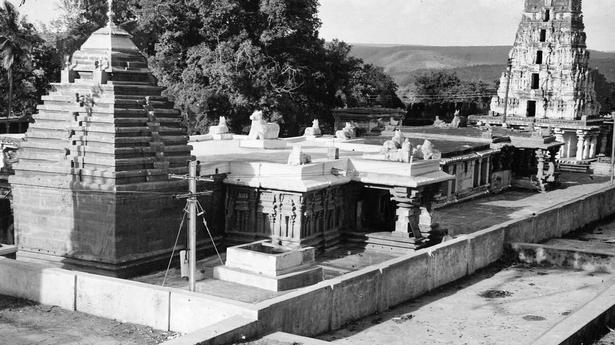 The song, ‘Shiva darusana namagaayitu’ is mentioned in the Sri Purandara Mani Malai by Madras Lalithangi and M.L. Vasanthakumari, set in raga Madhyamavati, and tala Adi (page 100 of the 1955 edition). It is one of the rare compositions by Purandaradasa that is set on Shiva and not Vishnu. Perhaps anticipating such comments, the composer included an admonition at the end, which I will reveal later.

For the record, there are other compositions on Shiva by Purandaradasa. ‘Chandrachooda Shiva Sankara’ is on Kumbeswarar of Kumbakonam, and has been sung by M.L. Vasanthakumari as a ragamalika — Sankarabharanam, Hamsanandi, Thodi and Khamas. The last charanam, which identifies the kshetram, is set in all four ragas in reverse order. ‘Karunanidhiye eesa’ is on Tiruvannamalai and has gained traction in recent times with a tune in Kurinji by R.K. Shriramkumar.

‘Shiva darusana namagaayitu’ is structured as a set of devotees going to the temple of Mallikarjunaswami in Srisailam. The composer lived at a time when the Vijayanagar empire was at its zenith. Much expansion and construction happened at this shrine and it became a popular place for pilgrimage. King Krishnadevaraya visited it immediately after his victory over the Gajapatis and made huge grants to the temple. The shrine, being a Padal Petra Sthalam, is much older. In Adi Sankara’s Sivanandalahari, Shiva at this shrine is compared to a jasmine that blooms in the evening. Being one of the 12 jyotirlingas, it also finds mention in Adi Sankara’s Dvadasa Linga Stuti. For 12th century poet Akka Mahadevi, Mallikarjuna was her spiritual ideal.

The temple celebrates a ten-day Brahmotsavam during Mahashivaratri, when the wedding of Shiva and Parvati is celebrated on the seventh evening. The song’s pallavi is about getting a darshan of Shiva on Shivaratri. Purandaradasa uses the word jaagarane — meaning remaining awake — which is part of the celebration of this festival. The anupallavi is more specific on the kshetra: “Having bathed in the sin-destroying Patalaganga, we saw the jyotirlinga and got rid of our daily concerns.” Srisailam is located on the banks of the river Krishna, which at this spot is known as Patalaganga. Thus, by combining the reference to Jyotirlinga and Patalaganga, Purandaradasa makes it clear that the song refers to the Srisailam temple.

The charanam is most interesting, as it has what scholar Dr. V. Raghavan would have referred to as a ‘knot’ — it states that Shiva looks at Saraswati and dances in joy on Nandi. The line in the book refers to Brahmana Rani (or Brahma’s queen, Saraswati). But this is clearly either a misprint or an error that’s come down over the ages. The goddess at Srisailam is called Bhramaramba. She is also referred to as Bhramara Rani — the queen of the bees. Having eight arms, legend has it that the goddess took on the form of a bee to kill a demon who could not be vanquished by any two or four-armed being. The line clearly meant Bhramara Rani, which over time became Brahmana Rani. On Mahashivaratri day, just before the wedding, Shiva here is taken around on the Nandi vahana exactly as Purandaradasa describes it. In addition, Mahashivaratri is also associated with the Shiva tandava, which he performs in the presence of the goddess.

This song by Purandaradasa is not often heard, and I would have never known of it had it not been for my mentor and friend, the late S. Rajam. He had learnt the composition directly from Madras Lalithangi and had also sketched its theme in one of his famed musical notebooks.

And now for the admonition — The song ends with the words ‘I saw the Lord on the hill even as I meditated on Purandara Vittala, who is Hari Narayana’. To enlightened souls such as Purandaradasa, such differences in form were immaterial.

The Chennai-based author, a historian, writes on music and culture.