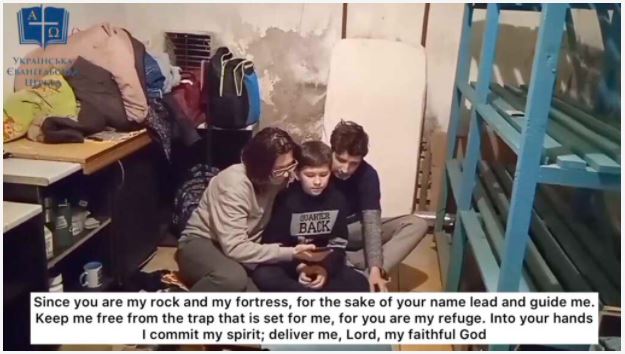 Ukrainian Christians continue to turn to their faith amid Russia’s brutal onslaught, as the violent military assault increasingly claims lives and property.

As uncertainty persists, many openly pray and worship, seeking God to calm and ease their pain. Throughout the ordeal, Psalm 31 has taken on special meaning in the hearts of Ukrainians.

Anatoliy Raychynets of the Ukrainian Bible Society is among those who have prayed Psalm 31, and he has spoken about the new lens through which he sees these ancient Scriptures.

“For me, as a pastor, that Psalm … well, I read it differently now because it’s about our current situation in Ukraine,” Raychynets recently said. “This ancient prayer — written several thousand years ago — now we see is so alive, is living.”

A new video compilation shows Raychynets isn’t alone. It displays countless Ukrainians reciting Psalm 31 from their bunkers and other safe locations as they turn to the Lord in praise and adoration.

“They have noticed that during this difficult time, many people want to find strength, rest, but also comfort in their faith and in God’s Word,” Oldi Morava of the British and Foreign Bible Society told Premiere. “They’re reading the book of Psalms for their own particular context. And Psalm 31 is becoming really significant for the entire nation.”

Morava encouraged people to read the Psalm from the perspective of a person who is hunkering down right now in a shelter, desperately hoping and praying for an end to Russia’s aggression.

The first five verses of Psalm 31 make perfectly understandable the passage’s placement at the center of the spiritual response to the war:

“In you, Lord, I have taken refuge;
let me never be put to shame;
deliver me in your righteousness.
Turn your ear to me,
come quickly to my rescue;
be my rock of refuge,
a strong fortress to save me.
Since you are my rock and my fortress,
for the sake of your name lead and guide me.
Keep me free from the trap that is set for me,
for you are my refuge.
Into your hands I commit my spirit;
deliver me, Lord, my faithful God.”

A million refugees have fled Ukraine in the wake of Russia’s attack, with more citizens likely to seek safety outside the nation’s confines. As Faithwire noted, churches are stepping up to the plate to help individuals and families.

Clinging to faith has been a fixture of the Ukrainian people’s response to Russia’s invasion. Case-in-point: CBN News’ George Thomas captured footage of a church congregation worshiping amid the chaos over the weekend.

He told Faithwire the church is not only praying and worshipping but has also actively engaged in being the hands and feet of Jesus; they are housing and clothing refugees.

“The pastor of the church, in essence, set the tone for this past Sunday,” Thomas said. “He got up and said, ‘As we worship and come into a time of praise and worship, that all of the songs we sing today, we sing keeping in mind what is going on today in our nation. And as we storm the gates of heaven with our praise … we are in essence storming the gates of heaven for peace as well.’”

Despite the anguish and turmoil of Russia’s war, Ukrainian Christians remain steadfast, vowing to preach the unending, compassionate & redeeming love of Christ. Take heart, your prayers are being heard. God is moving powerful on their behalf! #StandWithUkraine #PrayForUkraine pic.twitter.com/9OxPNTTIsu

As previously reported, there’s a complex religious history in Ukraine and Russia, with Russian President Vladimir Putin purportedly seeing an opportunity to seize control again of the Ukrainian Orthodox Church.

“The Orthodox Church in Ukraine, just three years ago, gained its autonomy, and its chief bishop was recognized by the Patriarch of Constantinople as having his own distinct authority, no longer subordinate to the patriarch of Moscow,” Mark Tooley, president of The Institute on Religion and Democracy, explained. “Which, obviously, the Russian church and the Russian state did not like.”

Read more about that here.

Please continue to pray for Ukraine and the many citizens hiding or fleeing the violence.