In Hyderabad, wing it and go for the grill or some juicy and crispy chicken 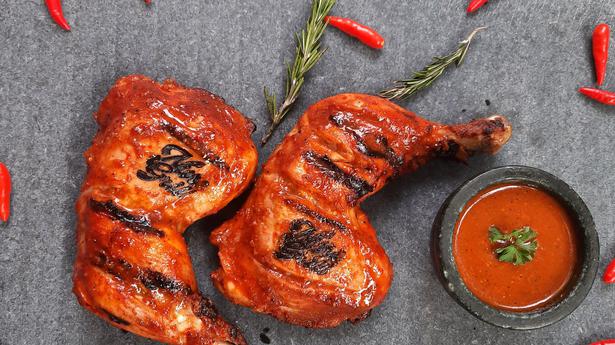 Whether you are hankering for a juicy grilled cut or a fillet of fried chicken, there are plenty of options for chicken-lovers across Hyderabad

Whether you are hankering for a juicy grilled cut or a fillet of fried chicken, there are plenty of options for chicken-lovers across Hyderabad

There is grilled chicken and then there is Nitro Grill chicken. Given a choice, which will customers reach out for? Nitro Grill is a cloud kitchen in Begumpet, Hyderabad, started by Imran Izzathullah after his friends and family were impressed by his grilled chicken recipe. Imran is a national-level shooter who has his heart in the FnB industry. With no formal training in culinary arts, Imran started his business as a home chef. He Toperates with two grills and a team of four. Imran claims two things make his grilled chicken stand out from the rest. First is the size of the bird, second and the most important factor is the homemade marinade, which the chicken soaks in for three to four 3-urs foaking it juicy and flavourful.

“I have been against store-bought sauces and dips solely due to the taste. I wanted a signature taste for my food. After many trials and errors at home, I decided on the sauce and named it Nitro,” says Imran, who, despite much coaxing will not share the secret of his sauce. But one of the important ingredients is definitely the onion.

At Nitro Grill, deciding on an order is easy. The menu is short: there are has two sizes of chicken portion and sauce options available. They are plain Nitro dip and Nitro cheesy dip. Then there are wings. Chicken can be ordered with a portion of saffron rice if one wants. Dhe barbequed sauce from the meat is an addictive balance of sweet and salty, with a tantalisingly spicy kick. Naturally, he wants to keep the recipe of his marinade and dips a secret because that is the USP of the grilled chicken at Nitro Grill.

While there are a couple of sides — saffron rice or fries— the small menu has one dessert: chocolate mousse, a homemade special. “The mousse is my mother’s recipe and is pretty popular amongst friends and family,” says Imran.

Grill it or fry it

The menu at Grill’d Chook lists their fried and grilled chickens in the Australian way with quirky names: the Bushranger fried chicken, You Beauty fried chicken and Champ fried chicken. Meanwhile, grill options are named according to portion sizes, such as FairGoMate, Captain Chook, Bloke’s and Sheila’s Pack.

Raffy Shaik who lived and worked in the FnB industry in Australia for over a decade uses the technique he learned there to make the ‘perfect’ fried and grilled chicken.

He says the world over fried chicken is cooked soft, juicy and still crispy. He does not favour much coating with batter. He reasons, “A diner wants to eat fried chicken, not fried batter. The batter should be as thin as a sheet mask. Anything thicker takes away the joy of fried chicken.”

Operating from a cellar at Masab Tank, Raffy claims that he prepares grilled chicken only on order or keeps just two chickens at a time. Reason: when a chicken is in the rotisserie for more than the required time, it gets chewy and hard. He grills the bird for an hour and allows it to baste for a few extra minutes inside the oven. Once off the rotisserie, it is brushed with perinoise (mix of peri peri and mayo). Raffy’s idea of serving fried chicken is in the style of serving schnitzel (a thin layer of meat fried to perfection with a crispy coating) cut into strips.

I followed the chef into the kitchen to watch the process. He took a ‘sheet’ of breast meat, gave it an egg bath and then coated it with Panko bread crumbs (imported from Malaysia, he doesn’t mind sharing). After that, it was lowered on the fryer for about seven minutes, then given a drizzle of peri dust or chilli and lime, the two most popular flavours. Each sheet of fried chicken is cut into long, bite-sized strips and served with a plate of fries and two dips — garlic mayo and perinoise. Fr

The full grilled bird on the other hand is much juicier, not at all chewy and (omes with a flavourful kick of thyme and garlic.

Check out Grill’d Chook (@grilldchook) and Nitro Grill (@nitrogrillhyd) on Swiggy and Zomato.