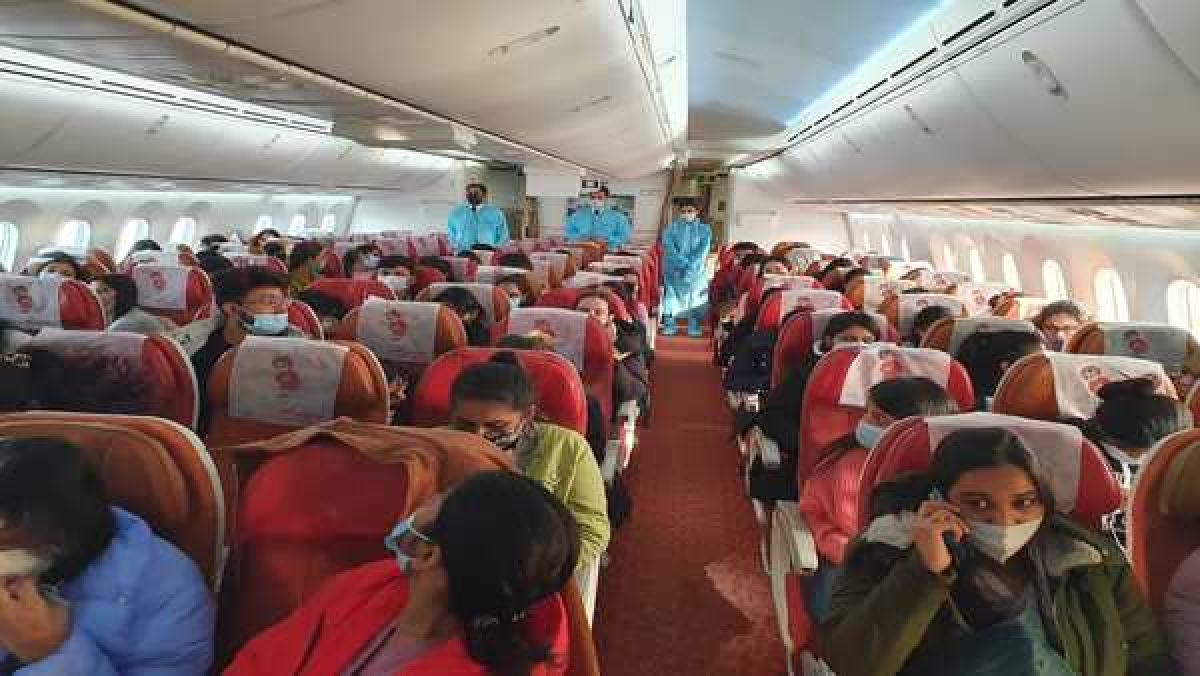 The airline’s two more evacuation flights — one for Bucharest and one for Hungarian capital Budapest — departed from Delhi on Saturday.

“Govt is working in mission mode to ensure the safety of our citizens,” tweets Union Minister @PiyushGoyal

The aircraft, which had taken off from the Henri Coanda International Airport, Bucharest, Romania this afternoon, brought home 219 passengers, mostly students from India.

“The Indian Embassy of Budapest has helped us a lot to cross the border. We are very happy and we hope for the best,”: Indian students after reaching Hungary#UkraineRussiaCrisis #UkraineConflict #RussiaUkraineConflict #russiaukrainewar #UkraineUnderAttack #UkraineInvasion pic.twitter.com/hye8nIh9wy

Goyal asked the returning passengers to speak to their friends still in Ukraine and reassure them not to worry. He said the Government is working in mission mode to ensure safety of our citizens. The Minister said that PM Shri Narendra Modi has spoken with the Ukrainian President and stressed about the safety of Indian citizens. The Minister informed that the Russians have also promised to help evacuate all Indians.

Goyal said more evacuation flights are being operated and the second flight is likely to land in Delhi in the wee hours of Sunday.

The Minister whole heartedly thanked Air India for its commitment to the national cause, which was met with an applause by all the homecoming passengers.

External Affairs Minister (EAM) Dr S Jaishankar also took to Twitter to welcome Indians, including students, who returned to the country on Saturday.

The second flight from Bucharest has taken off for Delhi with 250 Indian nationals. pic.twitter.com/zml6OPNirN

Large number of relatives of homebound passengers were present at the arrival concourse of the Mumbai airport to receive their near and dear ones.

External Affairs Minister S Jaishankar said on Twitter that AI1944 flight with “219 Indian nationals has taken off from Romania”. “Regarding evacuation of Indian nationals from Ukraine, we are making progress. Our teams are working on the ground round the clock. I am personally monitoring,” he added.

The Ukrainian airspace has been closed for civil aircraft operations since February 24 morning and therefore, the evacuation flights are operating out of Bucharest and Budapest.

Air India said on Twitter on Friday night that it deploy B787 aircraft from Delhi and Mumbai to Bucharest and Budapest on Saturday as special government chartered flights to fly back stranded Indian citizens. The Indian embassy in Ukraine on Friday said it is working to establish evacuation routes from Romania and Hungary.

“At present, teams are getting in place at the following check points: Chop-Zahony Hungarian border near Uzhhorod, Porubne-Siret Romanian border near Chernivtsi,” it said.

Indian nationals, especially students, living closest to these border checkpoints are advised to depart in an organised manner in coordination with teams from the Ministry of External Affairs to actualise this option, the embassy said. Once the above-mentioned routes are operational, the Indian nationals travelling on their own would be advised to proceed to the border checkpoints, it noted.

The embassy advised Indian travellers to carry their passports, cash (preferably in US dollars), other essential items and COVID-19 vaccination certificates to the border checkpoints. “Print out Indian flag and paste prominently on vehicles and buses while travelling,” it said.