From a food truck to a roof-top restaurant: Coimbatore-based Street Arabiya’s experiments with shawarma It all began as an experiment with a food truck. Today, Street Arabiya has two outlets and six trucks in the city, apart from branches in Tiruchy, Kangeyam, Chennai, and Palakkad

It all began as an experiment with a food truck. Today, Street Arabiya has two outlets and six trucks in the city, apart from branches in Tiruchy, Kangeyam, Chennai, and Palakkad

Ahamed Shahabath N was in school when he tasted a shawarma for the first time. “It was at a place in Karumbukkadai, I don’t remember what it was called,” recalls the 30-year-old. “It cost ₹50 a piece and a friend and I pooled in ₹25 each and shared it.” Today, Ahamed, along with friends and now business partners Yasar Arafath M, and Jansa Mohammed K, runs his own chain of mobile shawarma trucks and outlets in Coimbatore. The three friends, all engineers, started Street Arabiya as an experiment in 2018.

“We started by selling from a truck in Podanur,” says Ahamed, seated on the roof-top of their new outlet, which stands in the same locality. Their shawarmas were an instant hit. “We were among the first to sell shawarmas in a food truck. Also, we offered five different flavours,“ he adds. The following year, they set up another truck at Ramanathapuram. This particular truck is ever crowded, and is one of their most popular ones. Today, Street Arabiya has two outlets and six trucks in the city, apart from branches in Tiruchy, Kangeyam, Chennai, and Palakkad.

Street Arabiya was started as an experiment in 2018
| Photo Credit: PERIASAMY M

Downstairs, chicken is being slow-cooked in a horizontal rotisserie instead of the usual vertical one employed to roast the meat that goes into a shawarma filling. “The chicken is cooked over charcoal,” explains Ahamed. This is their latest introduction: charcoal shawarmas. We try the chicken version: loaded with the usual suspects — mayonnaise, onions, and chunky slices of grilled chicken — what sets it apart from regular shawarmas is that it comes wrapped in rumali roti. 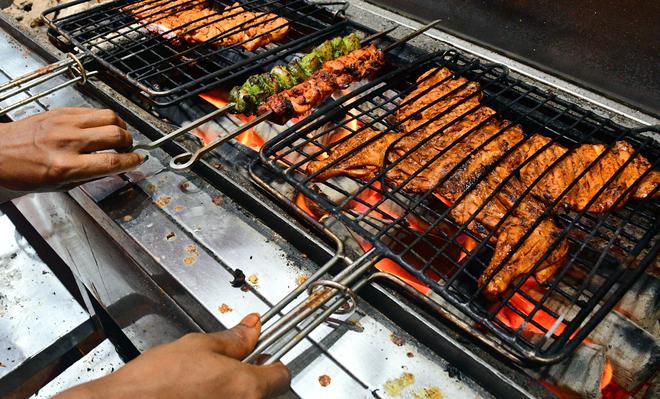 Best when had hot, the charcoal shawarma also has a version where the roti is completely black in colour. This one was their slightly-different Valentine’s Day special: think lone wolf instead of pink hearts. The black version (with added food colour) is a little too spicy. But this is exactly what Ahamed wants to offer: more flavours and spice levels to choose from.

Their chicken shawarma is a safe bet: it is creamy and rich, and in fact, was our go-to comfort food during the previous lockdowns. This comes rolled in a kuboos (Arabic bread made of wheat or maida), and you can also opt for the plate version where the filling is served separately. They also offer Mexican, peri peri, and Schezwan flavours, and serve the filling inside a burger and on top of a pizza as well. But the best is undoubtedly the regular chicken shawarma; the charcoal shawarma is worth a try too, but do keep in mind that a rumali roti becomes an entirely different entity when cold. Their in-house mayonnaise is pink in colour. “We use beetroot and strawberry to achieve that colour,“ explains Ahamed.

Street Arabiya’s Afghani alfaham, a version of grilled chicken, comes in a cream-infused, rich white gravy base. The white gravy further mellows down the already soft chunks of meat. Ahamed’s team is constantly thinking up new ways to stand out: the latest addition to their dessert menu is puttu ice-cream.