Rana Daggubati on playing a flamboyant part in ‘Bheemla Nayak, why he is glad to ride the Pawan Kalyan wave, and working with content creators and tech companies 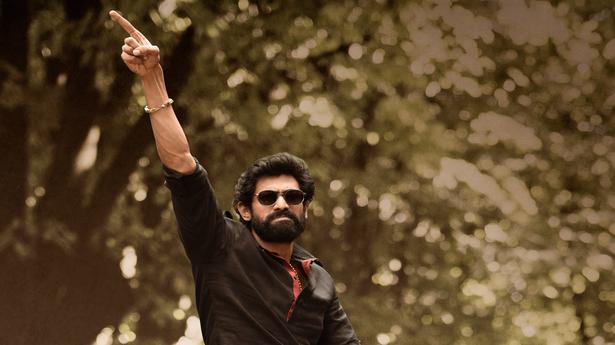 Rana Daggubati opens up on playing a flamboyant and ego-driven character, riding the Pawan Kalyan wave and on working with tech companies and content developers

Rana Daggubati opens up on playing a flamboyant and ego-driven character, riding the Pawan Kalyan wave and on working with tech companies and content developers

Bheemla Nayak, releasing on February 25, will be the first big Telugu film to arrive in theatres post the third wave of COVID-19. The remake of the Malayalam film Ayyappanum Koshiyum will have Pawan Kalyan reprising the role of Biju Menon and Rana Daggubati in the shoes of Prithviraj Sukumaran. The film is expected to bring the crowds back into cinema halls and understandably, Rana Daggubati is eager to gauge the reactions to this masala-laden outing.

Edited excerpts from a freewheeling conversation with the actor:

Ayyappanum Koshiyum was widely watched in the early days of lockdown. Tell us about the thought process that went into remaking an already popular film.

I watched the film and thought Koshy Kurien would be an interesting role to play. The Malayalam film had a cool plot that was rooted to Kerala’s culture and politics. There was scope to adapt the film to suit the culture and politics in the two Telugu States. When I learnt that producer Suryadevara Naga Vamsi of Sithara Entertainments had purchased the remake rights, I conveyed my interest to be a part of it. He later reverted with the news that Pawan Kalyan was eager to reprise the part of Ayyappan. The project grew bigger with him and Trivikram Srinivas (writer-director) stepping in.

Bheemla Nayak retains the soul of the original, showing the clash of two men of egos. There are new plot points and our film is shorter, around 2 hours 10 or 15 minutes, as opposed to the nearly three-hour original.

Is this your most masala-laden project yet, after Baahubali?

I don’t do the regular mainstream films with a usual love story, song and dance. I have been a king (Baahubali), a jungle man (Aranya) and so on. Daniel Shekhar in Bheemla… is the most relaxed character I have done so far. It was a joy to play a flamboyant, brash guy. In real life, we tend to be restrained. It was fun to let go (laughs).

I am also happy to ride the Pawan Kalyan box office wave. When (Amitabh) Bachchan saab did Pink, it was a multiplex-friendly film. We all know what happened when Pawan Kalyan starred in its remake, Vakeel Saab. It made a lot more money than the Hindi and Tamil versions. My father (producer Suresh babu) was among the first to watch Bheemla Nayak; he doesn’t give in to superlatives easily but told me he was ‘extremely satisfied’. I am waiting for people to watch the film.

What makes it fun to play negative characters?

Real life can be boring. I have dual jobs — I act but I am also in the office handling other responsibilities. Office meetings can get monotonous. While acting, I need to have something unusual and high on energy.

There are multiple layers to Koshy Kurian. He is entitled, brash and yet vulnerable, but is pushed further into the battle by his father. How does this remake interpret Daniel Shekhar?

Daniel is also an entitled guy; he wants to become an MP since his father (Samuthirakani) is retired. If Arjun Prasad (Rana’s character in Leader) had been an entitled guy who played dirty as an aspiring politician, he would be Daniel (laughs). The ethos of a State like Kerala is different and so is their topography, with small towns being connected by a forest. Their flamboyance would be perceived as understated in the Telugu States. So Danny has the same emotions as Koshy but the emotions play out at a bigger level. Viewers will feel the tension when Bheemla and Daniel cross paths, almost with a rage of wanting to kill each other.

Where is the story set?

The geography is a thin line between the two Telugu States and since it is a crucial part of the plot, I cannot reveal much. It will be evident in the initial scenes.

When the title Bheemla Nayak and the first poster was revealed, there was speculation on social media that your part is being sidelined. Will we witness a clash of equals?

It is a clash of two equally powerful characters. I was fine with Bheemla Nayak as the title since Pawan Kalyan is the more popular star. I still get to enact the crazy character I wanted to play. And, it would have sounded odd had we tried to force fit Bheemla and Daniel in the title.

What is your impression of director Saagar K Chandra?

He is a sorted guy who did not get overwhelmed with all the big names, including cinematographer Ravi K Chandran. Moving forward, I am sure he will be a promising director.

Were you disappointed about Kaadan-Aranya (Haathi Mere Saathi in Hindi)?

Such films turn out to be bigger teachers than successful films like Baahubali. I took back a lot as an actor from that film. Daniel was a cakewalk after playing the jungle man. It was disappointing that the film did not shape up as we intended it to. The story moved in two parallel ways — the story of my character as well as the other stakeholders — without converging well. I had fallen sick during the project, had to go to the US for treatment and meanwhile, the other portions were being filmed. When we saw the final edit, it was late to fix it.

You have been talking about the need for newer methods of storytelling, way before the conversation gained momentum during the pandemic. How do you perceive the shift that has happened in the last two years?

Years ago when I spoke about the blurring line between films in different languages, people did not buy into it. Post Baahubali, pan-India has become the norm. Further, the OTT boom has made people savour series and films across languages. At the moment, people want theatrical releases to be special enough for community viewing. So if Ayyappanum… worked massively on OTT, Bheemla… is designed for the theatres.

That brings us to Virata Parvam. When will we see it?

The first copy of the film will be ready by the end of this month. We haven’t announced a release date since there are many pending films waiting to release this summer. We will bring the film to viewers when the market stabilises. We want women and family audiences also to come and watch Virata Parvam.

You have completed 12 years as an actor, but you have been working for two decades. How do you look at this journey that has been far from monotonous?

Twelve years as an actor has been fun and varied, ranging from films like Ghazi to Baahubali. Much before that when I founded Spirit Media, I produced the national award-winning indie film A Belly full of Dreams (2005) and we won a Nandi award for the visual effects of Sainikudu (2006), but both films didn’t do well at the box office. I realised that to do something of greater value, one had to be an actor or a director. I became an actor out of the need to tell stories that were not conventionally mainstream. Acting helped me live several lives through the varied characters and that in turn changed my approach to life and business.

You have been working with tech companies to leverage their strength for cinema. What has been happening on that front of late?

I revived Spirit Media three years ago and as its CEO, I look into divisions that help strengthen both content creators and business entrepreneurs. We now have writers’ rooms in smaller towns in the Telugu states where people who are trained in writing — postgraduates in languages, teachers and journalists — are writing stories or adapting literature for cinema and series. Writers rooms intend to tap into rooted, local stories that can be told to a larger audience. Ramanaidu Studios, in its initial stages, relied on the strength of literature. We are working towards bringing back those days.

My collaboration with Anthill Ventures (headed by Prasad Vanga) helps me access technology — augmented reality, virtual reality, visual effects, blockchain, and more. Beyond the making of cinema or series, the film distribution system that has not changed in decades needs a fresh approach. and I think we could use technology for that.

On the acting front, there is Hiranyakashipu and as well the Netflix web series Rana Naidu. I thought the time was right to explore the long format of web series, along with my uncle Venkatesh. Karan Anshuman of Mirzapur is directing it. While Spirit Media looks into content development and business, I am trying something new as an actor.