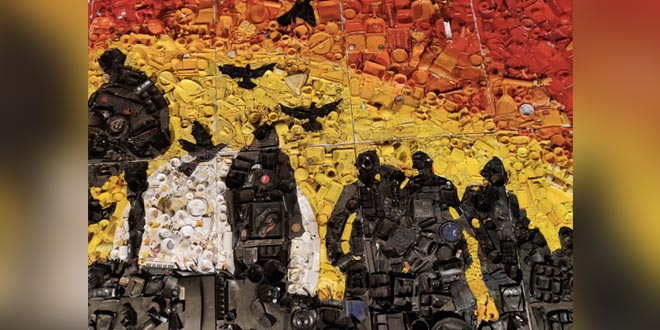 New Delhi: When a 45-year-old Sunila Vyas looks at something thrown away as waste, he starts thinking about the way that piece of garbage can be utilised and converted into his next art piece. This artist based in Indore, India’s cleanest metropolis, is on a mission to help the city maintain its status. While talking to NDTV, Mr Vyas said that with a little innovation, each person can manage their own waste and that generated by the community one lives in. He emphasises that people can help solve the problem of waste by following the 4 ‘R’s- Reduce, Reuse, Recycle and Rethink.

According to Mr Vyas, a Graphic Designer and an artist, he has been using waste to create art for the last six years. It was after the launch of the Swachh Bharat Mission and the multiple awareness generation campaigns organised by the Indore Municipal Corporation that Mr Vyas became aware of the problem of rising waste, especially the plastic waste in the country. He said,

I wondered what can we do about the lakhs of tonnes of waste that we produce every day as a country? Sure, the government has set up many plants to manage waste, but what can we do as individuals? I thought maybe I can use some of the waste I find as part of my art. My curiosity increased and gradually I started creating my art pieces completely out of waste. During different seasons, I go out to collect twigs of different colours and keep those in a box as we keep colours. Similarly, I collect old newspapers, magazines, and plastic from scrap dealers and what is produced at home. One necessary task that each one of us can do easily is to segregate the waste generated at home and dispose of the same sensibly to ensure recycling of what is possible. We must also focus on reducing the things we use in our daily life.

Mr Vyas highlighted that he has created artefacts of celebrities from waste generated by plastic and wooden supplies, including Prime Minister Narendra Modi, Rabindranath Tagore, Raj Kapoor, Nargis, Lata Mangeshkar, Monalisa, Amitabh Bachchan, Rekha. He added that his art piece depicting ‘Dandi Yatra’ with Mahatma Gandhi leading has been displayed by the Indore Municipal Corporation at a prominent spot in the city. This art piece was made using several items, such as buckets, dustbins, tubs, shoes, plastic plates and keyboards.

I want to show that scrap material can be used to carve out a career, exemplifying ‘waste to wealth’, He said.

Mr Vyas who is a Graphic Designer by profession, has put together a gallery showcasing his art made from trash. He also works in collaboration with Indore Municipal Corporation.

According to the Ministry of Housing and Urban Affairs, more than 1.4 lakh metric tonnes of waste per day is generated daily in the country, as of December 2021. Out of the total waste generated, over 98,300 metric tonnes per day, which is about 70 per cent, is being processed in a scientific manner, while the remaining 30 per cent is being disposed of in other ways, including in landfills, says the Ministry. The Ministry has stated that door-to-door collection is being practised in 97 per cent of the total wards, that is 86,263 out of 89,061 wards, while source segregation is being practised in 87 per cent of total wards, which is, 77,253 out of 89,061 wards in the country.