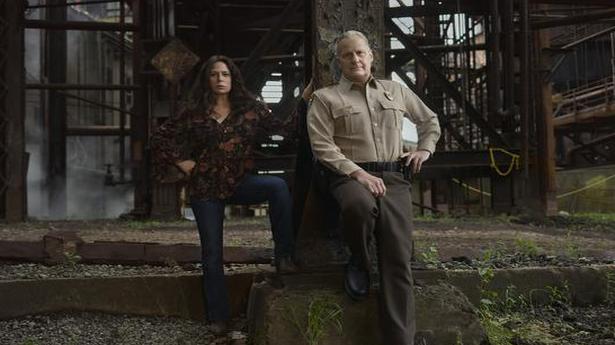 The two ace actors talk about starring in the TV adaptation of Philipp Meyer’s novel, interpreting their characters and more

He comes off the back of essaying former FBI director James Comey in political thriller The Comey Rule, while she is still earning plaudits for her role in relationship drama The Affair.

The series, set in a Pennsylvania Rust Belt town, follows the life of complicated chief of police Del Harris, who has to make a series of difficult choices, when the son of the woman he loves is accused of murder. Created by feted screenwriter Dan Futterman, American Rust is also the latest addition to the burgeoning slate of successful shows set in small-town America, that follows the lives and drama within a close-knit community.

Full of mutual admiration and respect for each other, Jeff and Maura talk to us about their experience filming the hotly-anticipated drama, how their stage and theatre backgrounds comes into play, and the almost-doomed romance which their characters share on the show.

Excerpts from an interview:

Mr. Daniels, given that your early days of growing up were in a somewhat similar setting, was it easier to resonate with the character of Del Harris?

Jeff: I am one of these guys from the show; I grew up in small town earlier and now I’m moved back to a small town, and my family is being raised there. I was a working-class guy, and several things on the show rang true and were familiar to me. Sometimes these kind of characters are oversimplified or dumbed down. But in the book and series, they are represented as complicated people… good people getting some bad luck, and trying to get unstuck after their dreams didn’t come true.

But just because they are down and without money, doesn’t make them bad. My character is dealing with a lot of things, including a broken heart, and he’s also a police chief trying to solve many things, working on 60-70 hours of not sleeping.

I haven’t played anyone who goes through what he does before, so it was a wonderful challenge.

The subtext of American Rust takes us through issues plaguing rural America like drugs, poverty and homelessness… how was it to shoot at such locations too, which depict these themes?

Jeff: Such issues, or the problem of opioid is not specific to south west Pennsylvania, or to that belt. And it’s not just in rural America, but also the urban places as well. It’s constantly on the news and is never-ending.

Jeff Daniels as Del Harris in a still from the show

There are all these places that have been left behind by the steel industry; just behemoths of factories and mills that are now rusted out. We shot at places like that, which hadn’t been used in decades, and I could just imagine the heat and people working there years ago.

Maura, your earlier project The Affair, which was a huge hit globally, was set in a small hamlet. We have seen other recent shows like Mare of Easttown, also set in a small town, also resonate with audiences. Now comes American Rust… is this a pattern that is popular now?

Maura: That’s such an interesting question! I suppose it’s because people who live in small towns aren’t any less complicated than people in bigger places. It’s also an effective storytelling tool to set a story in a small town, where everyone knows everyone else’s business, and it’s harder to stay anonymous.

Jeff: I agree with that. Not everyone is from New York or L.A, right? People from across the world can relate to these character as they find them identifiable. It’s not like watching Downtown Abbey or something similar, which is far away from who you are.

Your characters share an intriguing, almost doomed relationship throughout the course of the series. How did you interpret that?

Maura: You know, the last character I played started off as this woman of means, whose parents and husband had always taken care of her, and then later had to figure out how to be independent.

In American Rust, it’s quite the opposite. Nobody has taken care of her so far, and she’s trying to understand how to live in this world, and trust and love people. A still from ‘American Rust’

Jeff: For me, their relationship is like what you find in one of those paperback romance novels at the airport. He badly wants a relationship with her and goes all in, but she breaks his heart. But they are both still in each other’s lives, and then later she opens up to him. You eventually see them fall in love… but what they do is not what lovers do. That’s the beauty of the book and the writing in the show. It’ a romance novel that turns dark.

Both of you are renowned for your work in film, television and also theatre. You guys admirably balance everything, but which is more challenging or interesting?

Jeff: Well, they are all hard. Be it the stage and eight shows a week, or night shoots for a show or film where you have to hit it on the first or second take. But I still like the challenge of it, and I find it both dangerous and exciting — in this period of my career — to use and feed off the other actor.

Maura: I’ve been a TV actor all my life, but quite late in life, I found experimental theatre and now work with a company in New York. And you know, being on stage doing that is like no other feeling. I would like to explore that more.

Jeff: Once (the script of) all the episodes came in, and I saw what happens in the last two; it’s something I had never tried before, and I can’t believe I do what I do in episode nine! I can’t tell you what it is now. (laughs)

Maura: Well, we started shooting the show, then COVID happened; so we stopped and began again. When I read the script the second time, I really went, ‘Oh my God!’. It struck me then how good it really was.

Also, throughout the series, we are watching these people lose things, especially their freedom. But what they will do to get it back and how far they will go to do so, is something I found very interesting.