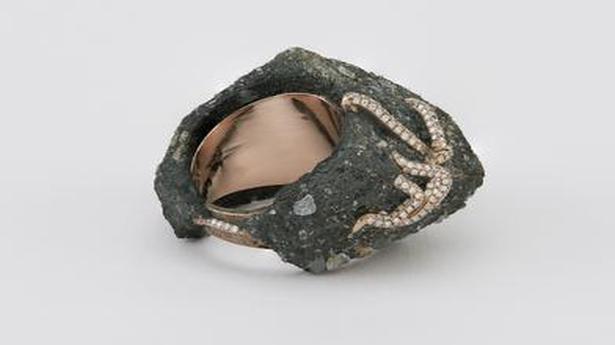 In late August, a start-up Indian jewellery label dazzled in Las Vegas. Studio Renn, a three-year-old Mumbai-based jewellery firm, debuted internationally to win the Innovation award at Couture, a major annual event in the fine jewellery and luxury watches industry. The award winning piece, the Strangler ring, is an acid-treated concrete construct reinforced with blackened 18K grey gold and brilliant-cut round diamonds. Because of the US travel ban, the co-founders, spouses Rahul and Roshni Jhaveri, watched the ceremony virtually. “It was a surreal feeling,” says Rahul, 36, while Roshni, 37, explains that innovation is a significant part of their design practice. “It’s not just innovation using an unexpected material, but also through finishes and discovery.”

Since inception, the duo’s creations have elevated jewel design into sculptural art forms. The Strangler is a by-product of their ongoing study of atrophy, or the impermanence of things. “It took multiple tries to get the edges absolutely perfect, and by acid treating it, the idea was to let go of the false sense of control we always have,” Rahul, Renn’s creative director, says. “It is this destructive act that softens the edges, partially exposes the inner form — to create the final ring. We are creating the work by seemingly destroying it, but also allowing the work to create itself serendipitously.”

Respected art collector Czaee Shah came across Studio Renn during their first exhibit in Mumbai in 2019. “I had not encountered, and still have not encountered, another jewellery design practice like theirs in India — no one whose work straddles the worlds of art and adornment so uniquely,” she says. “The Studio stands apart by not referencing Indian antique jewellery, as everyone else does, but opts for avant-garde designs and innovative techniques.” Like the Boletus Sp Rotting rings, another discourse on atrophy. The trio of 18K white and rose gold rings have reverse-set Burmese rubies and diamonds, and when seen together, each depicts the progression of ‘rot’. 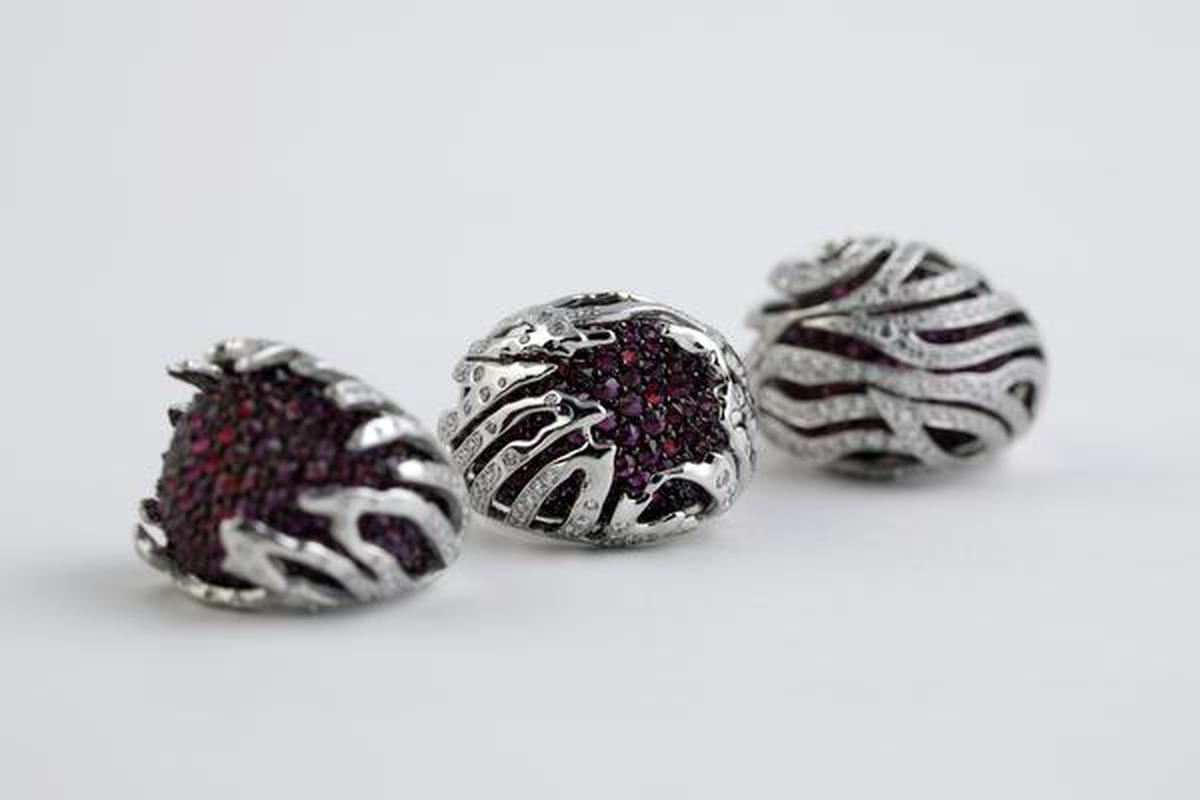 These highly-specialised pieces are a deliberate approach by Studio Renn to put design at the forefront of their jewellery. To do this, Rahul and Roshni interact with a host of creative individuals. “Architects, interior designers, visual artists, choreographers, performers, it’s from this tribe of creative people that we draw a lot of our inspiration,” Rahul says. The Strangler, for instance, is a collaboration with Mumbai-based architectural firm Material Immaterial Studio.

One of the brand’s collaborations, titled (An) otherness, comprises 65 pieces that were the product of discussions between the studio and contemporary artist Prashant Salvi. It grew from a series of sketches to become an exploration of texture, materiality, shapes, and techniques. The results include pieces like the Orange Peel Ruby Reflections bracelet, in 18k white and high-gloss rose gold, set with Burmese rubies and diamonds. The rubies are hidden from sight but visible through reflections, a marvel of light and shadow. “We are constantly experimenting with and exploring materials to enhance the design experience,” Roshni says.

Prior to the pandemic, Studio Renn debuted their collections in immersive installations in Mumbai, Kolkata and Ahmedabad (a Delhi exhibit is now on the cards). Working with leading design curator Divya Thakur on their first Mumbai show, Seeing the Unseen, in February 2019, or with American music composer Randall Taylor and Mumbai sculptor Nilesh Kinkale on The Fringe: Infinite Possibilities, in January 2020, resulted in exhibits that were more sensorial artistic expressions than typical commercial ones. Prior to founding their fledgling label, Rahul and Roshni, who met as students at Carnegie Mellon University in Pennsylvania, had no experience in jewellery sales or retail. Roshni’s previous career was as a strategy consultant — she now oversees sales and marketing at Renn — while Rahul is from a third-generation diamond family that sources, cuts and polishes rough diamonds. At Studio Renn (Latin for ‘rebirth’), their five-person design team have a background in art studies or architectural degrees. The studio’s location in the northern Mumbai suburb of Borivali and the Jhaveris’ long daily commute from their home in Malabar Hill to work allows the founders to absorb the city’s transforming views. “The cities we live in are in a constant state of flux, so that’s where the fascination with atrophy began,” Rahul says. “We are influenced by the city but also the lack of it,” alluding perhaps to the forested Sanjay Gandhi National Park, a bio-diversity gem in the eastern end of Borivali.

Working with both precious gemstones and gold, but also material that would not otherwise be considered valuable — such as concrete or coins — expands on their idea of the impermanence of things. “Every single thing we do is a creative pursuit. Jewellery is just one important part,” Rahul concludes.