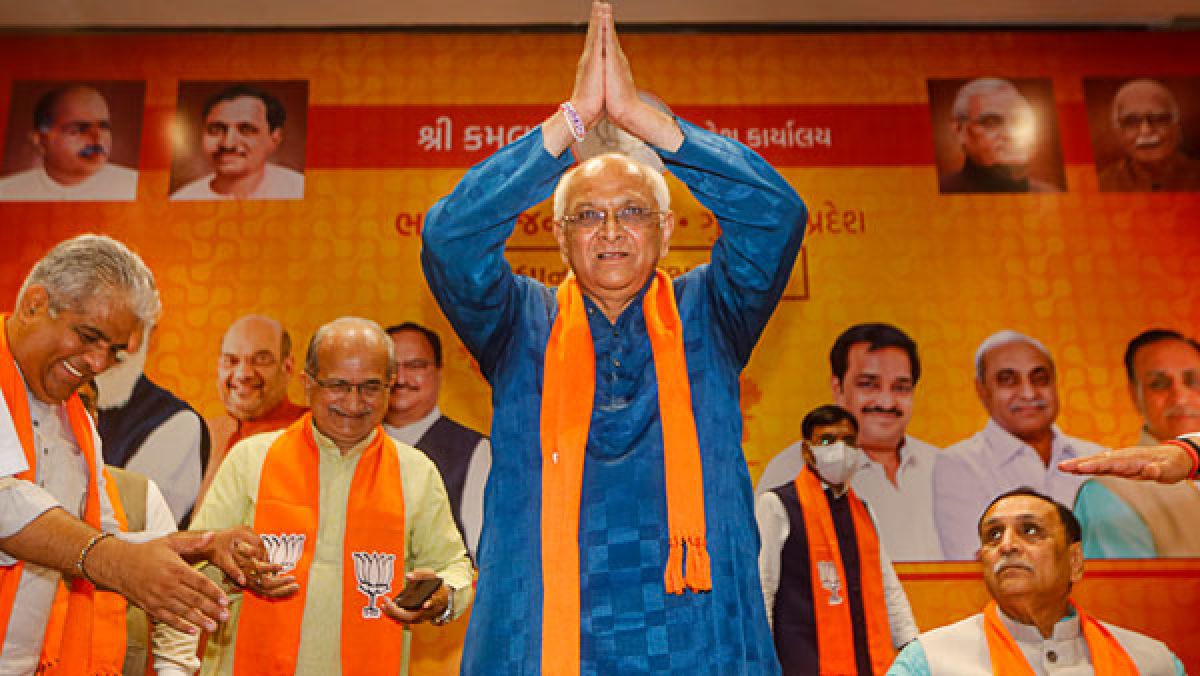 Gandhinagar, Sep 13: First-term MLA Bhupendra Patel will be the new chief minister of Gujarat. Patel (59) was unanimously elected BJP legislative party leader here on Sunday. He will be sworn in as the chief minister at 2.20 pm on Monday, BJP sources said.

The proposal to elect him the legislative party leader was moved by CM Vijay Rupani, whose resignation on Saturday, 15 months ahead of the state Assembly polls, surprised many political observers.

Patel has never held a ministerial post, just like Prime Minister Narendra Modi, who was never a minister when he became Gujarat CM 20 years ago. Modi was sworn in as CM on October 7, 2001, and became an MLA on February 24, 2002, by winning the Rajkot seat bypoll.

Most of the 112 MLAs of the party in the 182-member Assembly were present at Sunday’s legislative party meeting, BJP sources said.

Soon after the meeting, Patel, accompanied by senior BJP leaders, met Governor Acharya Devvrat at the Raj Bhavan. Patel presented a letter to form the government, which was accepted by the governor, the sources said.

In Monday’s swearing-in ceremony, only Patel will take the oath and other ministers will be inducted later, they said.

Patel’s name was not in the long list of probables being discussed in state political circles and he emerged as the dark horse, a political observer said.

A soft-spoken leader, Patel has had a meteoric rise in state politics, starting at the municipality level.

He contested his maiden Assembly election in 2017 and won Ghatlodia constituency in Ahmedabad by over 1.17 lakh votes, the highest victory margin in the state during that election.

He holds a diploma in civil engineering, always has a smiling face and is well-connected to the grassroots, a party worker said.

Talking to the media after his election as the legislative party leader, Patel thanked Prime Minister Narendra Modi, Shah and BJP president J P Nadda for placing their trust in him.

On his mentor Anandiben Patel, Patel said he is glad to have her blessings.

There has been a lot of development work during Rupani’s tenure as CM and he intends to take it forward, Patel said.

Gujarat BJP chief C R Paatil said Patel’s work at the grass root-level, his hold on the cooperative sector, association with party workers and administrative abilities were among the factors that led to his elevation.

Gujarat will continue to be a leading state in good governance and public welfare works, he said.

Nadda called up Patel to congratulate him.

Assembly elections in Modi’s home state are due in December 2022.

Rupani, the fourth chief minister to demit office in BJP-ruled states during the coronavirus pandemic, was sworn in as chief minister – his second stint as CM – in December 2017. He completed five years in office on August 7 this year. PTI