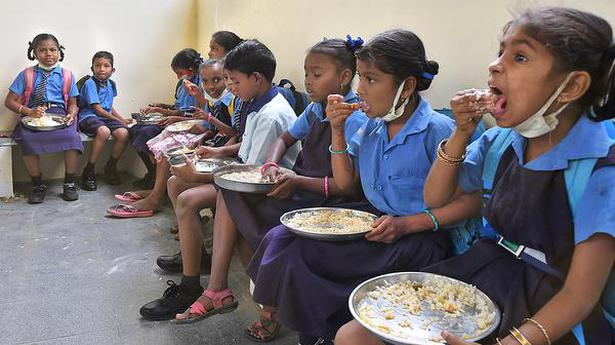 What does the introduction of fortified rice commercially mean to the common man?

Pawan Kumar, a student of the Government Higher Primary School, Obhichudanahalli, Bengaluru, gained 2.5 kilograms in three months after fortified rice was introduced in the mid-day meal at his school. His mother Indira Kumar is overjoyed. He is now active, lively and has better attention span, she says. The school-in-charge informed her about the change. “I was told that the rice has more micronutrients than regular rice. It has definitely helped my son. He is happier,” says Indira.

On Independence Day, the Prime Minister announced the scaling up of the scheme to supply fortified rice to beneficiaries under various Government schemes such as the Public Distribution System (ration shops), Mid-Day Meal and Integrated Child Development Service (Anganwadi centres) by 2024. A centrally sectoral pilot scheme on fortified rice and its distribution in 15 states (one district per State) had been approved by the Government of India in 2019. The scheme was to run for three years.

According to Shridhar Venkat, CEO of The Akshaya Patra Foundation, fortification of staples has certain benefits. “First: it is a low-cost solution, so it is easy to scale up. Second: it can be adopted with local and cultural preferences, and needs minimum behavioural change. Third: it is widely available in the retail market at no additional cost.”

Ravi Gupta, CEO, Shree Krishna Rice Mills, Karnal in Haryana, has 25 years of experience in establishing rice fortification plants. He explains: “In India, fortified rice is produced using extrusion technology where rice flour is mixed with a premix containing vitamins and minerals as per the standards given by the Food Safety and Standards Authority of India (FSSAI). In the case of rice, a premix containing Iron, Vitamin B12 and Folic Acid is mandatory. Fortified rice kernels are produced from this mixture using an extruder machine; it resembles milled rice in size, shape, and colour. These kernels are then blended with non- fortified rice, typically at a ratio of 1:100 (optimum).”

Dr Sheila Vir, Director, Public Health Nutrition and Development Centre, New Delhi, says that while the FSSAI is the regulatory body for implementing rice fortification, staple food fortification in India is a voluntary programme. While the Government is planning to include fortified rice in food safety net programmes, its availability in the open market is at the discretion of the manufacturer. Currently, fortified rice is available for sale in the open market under the brand names of Daawat (Sehat), Lohitha, and Asbah. All fortified staple packets will bear the +F logo.

According to her, around 16 studies (including five from India) conducted on infants, children and women have shown the efficacy and effectiveness of fortified rice in improving micronutrient status. The subjects showed reduction in anaemia, increased Hb levels, improved Iron, vitamin B12, Zinc and multiple micronutrients.

According to the FSSAI guidelines issued in 2016, the Akshay Patra facility installed the rice blender system and procured fortified rice to mix with regular rice in the ratio of 1:100. “We had engaged school relationship officers to impart training on rice fortification for school teachers and students,” says Shridhar. They also developed a standard operational procedure (SOP) for their centralised kitchen to process the fortified rice, assess the supplier, and set quality parameters and testing protocols to ensure quality and safety.

Akshaya Patra’s centralised kitchen feeds up to 5,00,000 children in Bengaluru, Bellary, Huballi, Mysuru and Mangaluru districts of Karnataka. In 2017, they scaled up the rice fortification programme in Uttar Pradesh (Lucknow district) and Gujarat (Ahmedabad district) to cover 2,00,000 children. “In total, 7,00,000 children benefit from the fortified rice,” says Sridhar.

Sheila Vir says, “The fortification logo (+F surrounded by a circle) indicates the addition of extra nutrition and vitamins. It is a visual symbol to enable people to identify that the food is fortified.” She adds that there is no evidence that consumption of fortified products in the long run makes us dependent on external or applied nutrition.

Besides rice, six other staples — atta, maida, raw rice, oil, milk and salt — have been gazetted for fortification. With a policy push for large-scale fortification of staples and rice in particular, we can hope to say goodbye to hidden hunger.