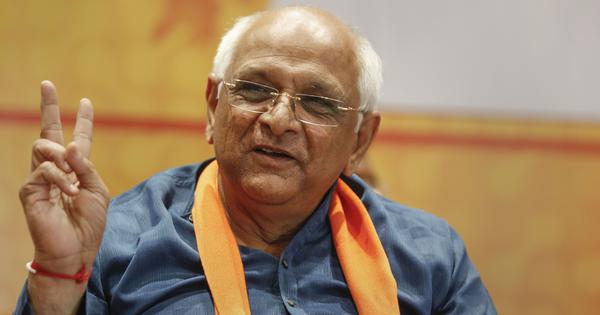 Bharatiya Janata Party leader Bhupendra Patel was chosen as the new chief minister of Gujarat on Sunday. This came a day after Vijay Rupani had stepped down from the post along with his entire Cabinet.

Patel was elected as the leader of the BJP legislature party after a meeting in state capital Gandhinagar. He will be sworn in on Monday, BJP’s Gujarat unit chief CR Patil said at a press conference, PTI reported. The new Cabinet will be formed after consultation with the senior leaders in a few days, the state unit head added.

Bhupendra Patel is a first-time MLA who won the Ghatlodia seat in the 2017 Assembly elections. He defeated Congress candidate Shashikant Patel by more than 1.17 lakh votes, the highest winning margin in the polls.

The 59-year-old is a protege of former Gujarat Chief Minister Anandiben Patel, who is currently the governor of Uttar Pradesh, The Hindu reported. The Ghatlodia seat was also held earlier by Anandiben Patel.

Patel was unanimously chosen for the post by the MLAs after Rupani proposed his name, PTI reported. But some reports also suggested that Prime Minister Narendra Modi and Union Minister Amit Shah chose Patel as the successor of Rupani.

Shah congratulated Patel for being chosen as the new chief minister and expressed confidence in his leadership.

“I believe that the development of Gujarat will get renewed impetus and the state will be leader in good governance and welfare of the people under your leadership and the guidance of Narendra Modi,” Shah said in a tweet in Hindi.

Rupani told reporters that Patel was a “capable” leader and the BJP will win the elections under his leadership, ANI reported. Assembly elections in Gujarat are expected to be held in December 2022.

Rupani stepped down from his post on Saturday without giving any reason. He thanked the party’s leadership for giving him the opportunity to serve as the chief minister and Prime Minister Narendra Modi for guiding him.

The Congress alleged that BJP had made Rupani a “scapegoat” to hide its mismanagement of the coronavirus crisis in Gujarat.

He became the fourth BJP chief minister to resign from his post this year. On July 26, BS Yediyurapparesigned as the Karnataka chief minister, while Tirath Singh Rawat quit as the Uttarakhand chief minister on July 3.