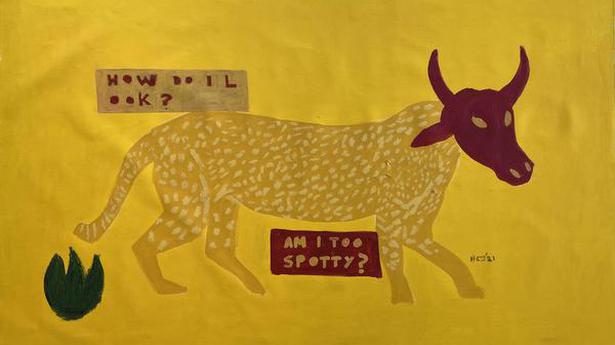 Artist Harsimran Juneja is drawn to the colour yellow. He has done about 60 paintings exclusively in yellow and would probably do more. The colour, he says, is the balance between sadness and hope — a medium through which he explores the “greys” of life. “I don’t think I’ll get out of this any time now,” he says, over the phone from Ahmedabad where he is based.

Harsimran’s works, which contain half-animal – half-human figures and text, challenge notions of societal acceptance and ideas of a perfect body. A series of four paintings, titled ‘Insecurities’, is especially inspired by the times we live in, says Harsimran. “Unfortunately, this is an era in which our physical figure suggests how or who we are.” The paintings are a reflection of a society full of contradictions.

One of his striking works in the monochromatic series depicts a panda with a cow’s face beside a shredder. The 30 x 60-inch work in mixed media (emulsions, acrylic, oil sticks on canvas) is a take on the need to shed the insecurities we have created for ourselves. The series comes under the larger title, ‘Animal Confessions’, which are observations of life in a complex social milieu.

He relies on human-animal hybrid figures to convey the politics of human nature. The works are large, some of them even up to 9-ft tall. “Though COVID-19 opened up online art viewing and exhibition platforms, there is nothing like a physical exhibition, where the viewer can experience the dimensions of the work,” he says.

A self-taught artist, he believes in maintaining discipline. He spends two hours at his studio every day before heading out to work— he is the co-founder and director of Ahmedabad-based Uno Lona Art Academy. Though he took a Bachelors in Business Administration, art has always been at his core. “My life is a constant deliberation between conflict and contrasts. While I want to remain a full-time artist, I understand the need to be able to sustain a life in art,” he says.

His art practice is more of a conversation with himself and inspired by his life experiences. There are statements, text, mini poems and drawings. “I use an unbleached white colour for the canvas and staring at it is a routine. I do what comes to my mind, sometimes I paint, write, scratch it out, or paint it over. It gradually evolves into a painting.” His visual language moves between representation and abstraction. He draws inspiration from American artist Jean-Michel Basquiat, whose raw and primitive style resonates with Harsimran’s sensibilities. He is also moved by the works of pop artist Andy Warhol and Japanese contemporary artist Yayoi Kusama. “However, my art practice is a journey to find my own voice,” he says.

His works are currently on display in a month-long group show at the Jonathan Ferrara Art Gallery in New Orleans. A few works are also part of a group show at Gallery 78, Hyderabad. Harsimran’s works can also be viewed @harsimranjuneja on Instagram.