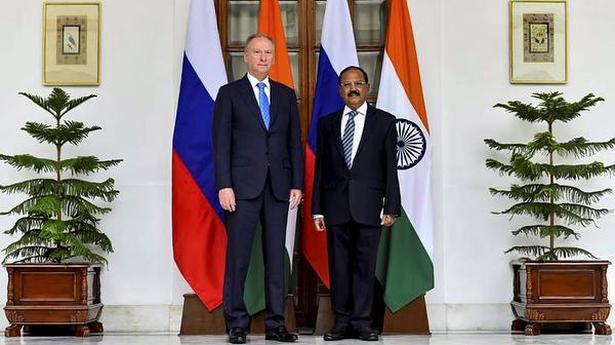 India raises issues of Pakistan’s links with new regime, JeM and LeT in the talks.

India and Russia conducted their first “detailed and extensive review” of the situation in Afghanistan, agreeing to coordinate their positions at the United Nations as a delegation led by Russia’s Security Council Secretary General Nikolay Patrushev met National Security Advisor Ajit Doval in Delhi, officials said.

During the meeting that came a week after Russia decided to abstain from a U.N. Security Council Resolution on Afghanistan under India’s presidency, the two sides stressed on areas of ‘convergence’, including the need to hold the Taliban to their promises thus far, the threat of terrorism from international terror groups inside Afghanistan, flow of weapons and increase in opium production and drug trafficking under the new regime.

“[Mr. Doval and Gen Patrushev] touched upon humanitarian and migration problems in [Afghanistan], as well as prospects for the Russian-Indian joint efforts aimed at creating conditions for launching a peaceful settlement process on the basis of an intra-Afghan dialogue,” a statement issued by the Russian Embassy in Delhi said, adding that the two sides “agreed to coordinate the approaches of Russia and India in multilateral formats on the Afghan settlement.” The Russian Security chief also met Prime Minister Narendra Modi and External Affairs Minister S. Jaishankar.

Sources said India raised the issue of Pakistan’s links with Taliban, international terror groups, and the Lashkar-e-Toiba and Jaish-e-Mohammad, believed to be operating in Afghanistan as well, in the talks with the Russian delegation.

The Indian delegation also raised the “special responsibility that Pakistan bears to ensure that Afghanistan soil is not used to spread terrorism,” the sources said. Significantly, neither side gave any indication of talks on the status of the Haqqani group, a UNSC-designated terror group that has carried out attacks on the Indian embassy and consulates in Afghanistan, whose leader Sirajuddin Haqqani has been named the Interior Minister of the new regime.

The talks followed a day after CIA Director William Burns flew into Delhi to meet Mr. Doval, reported by The Hindu. The U.S. has been discussing the issue of housing its Afghan evacuees who are being processed in other countries, the emerging terror threat from developments in Afghanistan and any future engagement with the Taliban government, now headed by Mohammed Hassan Akhund, who is also on the list UNSC designated terrorists.

The Modi government has thus far maintained an independent posture from both the U.S. and Russian stands on the Taliban regime, deciding to close down its embassy in Kabul unlike Russia, China and other countries that kept their missions open, or like the U.S. and European countries who moved their mission bases to Doha.

India also only publicly acknowledged talks last week with Taliban leader Mohammad Stanekzai, who has now been named Deputy Foreign Minister of the new regime, though the U.S. and Russia have both engaged the Taliban for some years. In an interview to RIA Novosti on Tuesday, Ambassador to Russia Venkatesh Verma said the results of the U.S.’s Doha Agreement and the Russia-led Troika plus talks which included the U.S., China and Pakistan had not been “matched by subsequent developments” in Afghanistan.

“India was not a direct participant in the Doha talks. India was also not part of the Troika Plus mechanism, but as I said, these mechanisms have not yielded the right results. I think one lesson is that it is better that India and Russia work together with respect to Afghanistan. That is the most important lesson for us,” Ambassador Verma said.

On Thursday, Prime Minister Narendra Modi will host Russian President Vladimir Putin and leaders of China, Brazil and South Africa for the BRICS summit in a virtual format, where Afghanistan is expected to be discussed as well, and Mr. Doval is expected to make a presentation.

Next Thursday, there will be more intensive regional discussions at the SCO summit, which will include PM Modi, President Putin, Chinese President Xi, Pakistan PM Imran Khan and leaders of Central Asian countries, with an Afghan contact group meeting on the side-lines. Afghanistan is an observer state, and it remains to be seen how it would be represented.