Here’s why the ‘Milk Crate Challenge’ went all wrong 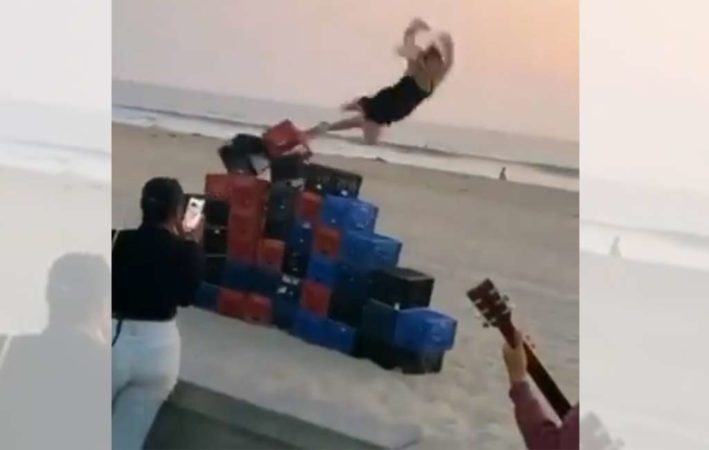 The recent ‘Milk Crate Challenge’ has been a worry for several doctors in the US. As the challenge led to several injuries, sometimes irreversible, among many in the country, the challenge was banned from leading short-video platform TikTok.

So what is this ‘Milk Crate Challenge’? The task which went viral in the US in August – involves stacking milk crates into a pyramid-shaped wall, then trying to climb to the top from one side and proceeding to descend towards the other while balancing the crates underneath.

But, the challenge also led to some most dangerous falls.

Now, in an attempt to understand the reason behind the ‘mighty fall’ among many who took up the challenge, a professional engineer from the US shared an explanatory video on ‘Reddit’.

In the video, he explains that the crates are just a series of unsupported columns. The higher the column, the less of a rotational movement it needs to fail.

“When humans climb up, they can control their weight distribution well enough to get even to the most unstable column, but when climbing down, our muscle control and accuracy are not good enough. Without a perfectly balanced compressive force on the column we are going to, whilst maintaining a slow and controlled decompression of the tallest column we are now leaving, their instability causes them to fall,” he explains.

He further shares that even if a person tries to step on the centre of the crate, since there is no proper base or external support on the crates, there are high chances of the person tripping off the pyramid.

However, he also quizzes if the challenge can be tweaked a bit so the person can walk down backwards, while stepping right at the centre of the crate so one can avoid the rotational movement of the crates leading to the fall.

Also, by the end of his explanation, he mentions that he would prefer to stick all the crates together so they are supported well and cannot move or be dismantled easily.

Have a look at some of the ‘Milk Crate Challenges’ that totally went wrong: