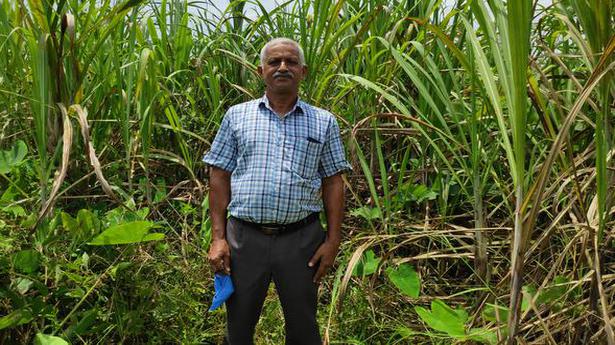 Sugarcane grown on the flooded river banks of the Pampa, Manimala, Achankovil and Meenachil yields sweet organic jaggery with a distinctive taste

Two days ago, I received by post two packs of honey-coloured organic jaggery. Sweetened by the sun and the rich riverine soil, it narrates a sweet story of the revival of sugarcane cultivation in Central Travancore, comprising Kottayam and Pathanamthitta districts and Chengannur taluk of Alappuzha district.

The jaggery was made from sugarcane grown by Jose Kuncharakattil Abraham at Arumanoor, a village on the banks of the Meenachil in Ayarkunnam panchayat, about 13 kilometres from Kottayam. Following in the footsteps of his father and grandfather, the 61-year-old former Physics teacher resumed sugarcane cultivation after he retired from St Sebastian Higher Secondary School at Ayarkunnam.

Sugarcane grown by Jose Kuncharakattil Abraham at Arumanoor is crushed to extract the juice. This is used to make the famous Central Travancore jaggery

Sugarcane cultivation and jaggery making were once common along the banks of the Manimala, Achankovil, Pamba and Meenachil rivers. “Growing up, I remember sugarcane fields in our neighbourhood. The sweet smell of jaggery-making filled the air. By the time, I was in my twenties, my family had stopped cultivating sugarcane. When I wanted to resume cultivation on eight acres I own, I contacted the Agricultural Research Station (ARS) at Kallunkal in Thiruvalla to procure the seeds,” he says.

In the early 20th Century, 8,000 hectares in Central Travancore were under sugarcane cultivation, says Dr VR Shajan, head of ARS, which functions under the Kerala Agricultural University. The Travancore State Manual (Volume III) published by the Government of Kerala (1996 edition) talks about sugarcane cultivation and jaggery production in the erstwhile kingdom of Travancore. The value of the jaggery exported during 1927-1936 ranged from ₹2.08 lakh to ₹11.36 lakh.

Sugarcane juice is heated till the water content evaporates and the sweet residue is poured into flat pans to be cooled. Workers at Jose Kuncharakattil Abraham’s place at Arumanoor, are pouring the hot residue into flat pans

“Ibn Battuta has written about the sugarcane of Kerala in the 14th Century. It was grown in a continuous belt from Pathanamthitta to Thiruvalla and Kottayam. In 1946, Pampa Sugar Mills was started at Valanjavattom, seven kilometres from Thiruvalla. Mannam Sugar Mills was at Pandalam,” says Shajan.

Managing director of Horticorp, J Sajeev, who was former farm superintendent of the Sugarcane Seed Farm under the Department of Agriculture, says: “The State Farming Corporation cleared forest land to cultivate sugarcane for the smooth running of the two sugar mills. The Agriculture Department used to give licenses to around 75 to 100 units functioning in the area.”

Molten, sweet residue of sugarcane juice is poured into flat pans. When it cools, it is rolled into balls of jaggery

However, the Gulf boom in the Eighties changed the land use pattern. Many people stopped cultivating sugarcane as the labour intensive work became unprofitable. Gradually sugarcane cultivation almost vanished in this area. The sugar mills stopped functioning as enough sugarcane could not be procured for profitable operation of the mills. Cheaper, adulterated jaggery from neighbouring states made it difficult for the farmers to find customers. This affected the making of jaggery although a handful of farmers continued making it on a small scale.

Sajeev, who joined the Sugarcane Seed Farm in 2002, recalls that sugarcane was cultivated on 25 hectares owned by the Farm. Since both the sugar mills had downed shutters by then, the sugarcane had to be sold at throwaway prices. “We decided to find out if there was any chance of resuming production of jaggery at the farm. We toured Pollachi and Theni in Tamil Nadu and recruited a family from Theni to work in Pandalam on a contract basis. Pandalam Jaggery production at the Seed Farm began in 2007,” recounts Sajeev.

There was a huge demand for unadulterated jaggery. “The jaggery made in these parts have a natural sweetness and colour. And unlike sugarcane grown in alkaline soil, there is no taste of salt in the jaggery,” says Sajeev.

Harvested sugarcane is crushed and jaggery is made by heating the juice till the water content evaporates. It is then poured on flat containers and rolled into balls of jaggery or sold as padhiyan sharkara.

Central Travancore Jaggery being made at Jose Kuncharakattil Abraham’s place at Arumanoor, a village on the banks of the Meenachil in Ayarkunnam panchayat

Unda sharkara, chukkunda, infused with the flavours of cardamom, cumin and dried ginger, and paani are some of the products made from the sugarcane juice. Last year, sale outlets at the ARS sold 10 tonnes of jaggery at ₹150 per kg. At present, padhiyan sharkara, unda sharkara and chukku sharkara are sold at the outlet.

The ARS applied for a GI tag for the jaggery made in Central Travancore and got it in 2009. It was revived in 2019. Shajan explains that the unique taste of sugarcane is because it is grown on the banks of the rivers that gets flooded during the monsoon. He adds, “As river banks get inundated during the monsoon, sugarcane is the best crop that can be grown in the waterlogged soil. Sweet semi-solid padhiyan jaggery has a deep amber colour and is a speciality of the region. This is because of the rich micronutrients present in the soil.”

He adds: “Madhuri , a variety of sugarcane, is best for the fields here. It would be unprofitable to cultivate it on one or two acres. More land has to be cultivated for a jaggery production unit to be profitable. At present, approximately, 250 to 500 hectares are under sugarcane cultivation. However, it is not a continuous belt as it was before.”

Jose Kuncharakattil Abraham selling the handmade Central Travancore jaggery made from sugarcane cultivated by him at Arumanoor, a village on the banks of the Meenachil in Ayarkunnam panchayat

As the leaves of the sugarcane are serrated, it can lacerate farm labourers. “Labour is hard to find and we make do with migrant labourers although the jaggery making is done by families in the area who used to do it in my parents’ time,” says Jose. He has two sales outlets and sells about 300 kilograms in a day. As the jaggery is not treated with caustic soda and other chemicals, there is a constant demand, which has spurred many to take up sugarcane cultivation again.

Jose, for instance, has taken 16 acres on lease to cultivate sugarcane. He says with a laugh that every day there is a long queue at their sales outlets to buy jaggery. He couriers it to buyers from across India.