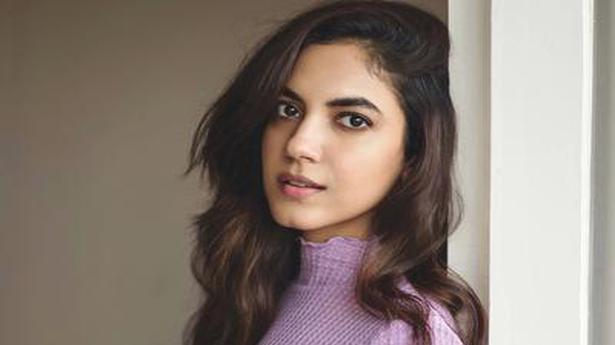 Ritu Varma on playing a rural character in her upcoming film with Nani, and why strong on-screen women should be the norm than an exception

If there’s a commonality between the characters that Ritu Varma has portrayed so far in Telugu and Tamil cinema, it would have to do with playing confident, strong on-screen women. Think the runaway Telugu hit Pelli Choopulu (2016) or the con-comedy Kannum Kannum Kollaiyadithaal (Tamil, 2020) or the Avarum Naanum – Avalum Naanum segment in the Tamil anthology Putham Pudhu Kaalai (2020). Having grown up watching confident. independent women around her, she cannot fathom why women who speak their mind should be the odd ones out on screen. Ahead of her new Telugu film Tuck Jagadish, which will premiere on Amazon Prime Video on September 10, Ritu Varma discusses her film choices and what it took to play a rural character in the Shiva Nirvana film co-starring Nani.

Also Read | Get ‘First Day First Show’, our weekly newsletter from the world of cinema, in your inbox. You can subscribe for free

Excerpts from the interview:

For the first time, you are part of a story in a rural milieu. Was that one of the reasons to take up Tuck Jagadish?

Yes it was, apart from the fact that it’s a Shiva Nirvana and Nani film. I play Gummadi Varalakshmi, a village revenue officer. She is authoritative and yet there is an innocence about her. My part is more than just a heroine and it all blends in seamlessly into the story. The women in Shiva Nirvana’s films have strong character and this will be no different.

Did it require a change in approach to play a rural character?

I was born and brought up in Hyderabad and haven’t explored rural culture. So this film was new and exciting for me. We were on a tight schedule and I didn’t get to mingle with the local people (Tuck Jagadish was filmed in Pollachi in Tamil Nadu and East Godavari region in Andhra Pradesh). I think the costumes, hair and makeup play a significant part in helping to get into a character. The director’s inputs helped me learn the required body language and dialogue rendition. We began the first schedule in February 2020 with the ‘Inkosari’ song in stunning locales. In this song, I got to do the song and dance bit like a mainstream heroine, which I don’t normally get.

You’ve been lucky to get characters that aren’t the cutesy heroine kinds, isn’t it?

I’ve been offered characters of strong women and I think that should be a norm rather than an exception. I would love to explore different kinds of characters, even a typical mainstream heroine if it is written well. At the end of the day, I am an actor and should be able to fit into any role.

You worked with Nani in Yevade Subramanyam (2015). When you team up with a co-actor a few years later, after gaining experience in cinema, are the dynamics different?

It is. I was new to cinema and had a small role in Yevade… we shared a good work experience but didn’t interact much. This time, I got to know him better as a person. I observed that when he talks, people listen. I’ve also grown as an actor and as a person. I could see that the director, DoP (director of photography) and others on set were happy with the scenes that involved the two of us. I am going to be greedy and say I wish we work together again.

You have been getting a lot more recognition in the last two years than before. Do you get offered better roles now?

Kannum Kannum Kollaiyadithal fetched me a lot of appreciation. I am filled with gratitude when new-age Tamil directors tell me that they have written a character with me in mind. I enjoyed working in Putham Pudhu Kaalai, Dhruva Natchathiram, Ninnila Ninnila and Tuck Jagadish. In Telugu I have Varudu Kavalenu and Oke Oka Jeevitham; I’ve also signed a new Tamil film with Ashok Selvan, which we will begin working on in October. It’s still a struggle, but I do get offered more interesting projects than before.

In earlier interviews, you stated that you weren’t happy with the projects that came your way after Pelli Choopulu. Was it tough to step back after the film’s massive success?

It was a phase when I struggled to explain to my family, friends and to people in the industry why I wasn’t keen on the projects offered to me. I was told I need to cash in on the success of Pelli Choopulu, but how do I take up something that I am not happy with? There was a lot of noise around me that I had to cut out. I like to be myself, be it in the films I choose or in things I do each day. For instance, I don’t always make an effort to look perfect for photographs when I go to the gym. There are days I request photographers not to take my pictures.

What helps you cut the noise around you?

My family and close friends keep me grounded. When I am not on a film set, I paint, sketch, cook, travel or can just do nothing.

In Varudu Kavalenu, you play a woman who is 30 and single. Such a character might have been considered risky in Telugu cinema a few years ago.

That thought never crossed my mind. I liked the story and the character and agreed. I’ve never gone by the diktats of what would seem safe or a risk.

What are your plans for September 10?

I will be watching Tuck Jagadish with my family and close friends. My mother is my biggest cheerleader, I hope she likes the film. I will be looking forward to the reactions from viewers, since the film will be streaming worldwide.