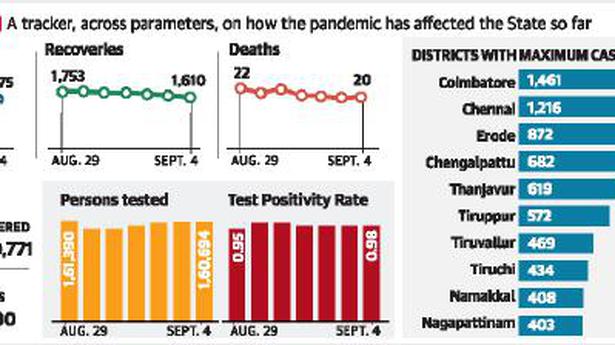 Tamil Nadu’s COVID-19 toll reached 35,000 on Saturday as 20 more persons succumbed to the infection. As fresh cases continued to fluctuate in a few districts with 1,575 persons testing positive, no death due to COVID-19 was reported in 28 of the 38 districts.

Of the 20 deaths (three at private and 17 at government hospitals) that were reported on Saturday, Coimbatore accounted for four fatalities, followed by Chennai and Tiruchi with three each. Three districts — Erode, Salem and Tiruvallur — recorded two deaths each, while the remaining four districts accounted for one death each.

So far, Chennai has recorded 8,408 deaths, while there were 2,433 deaths in Chengalpattu and 2,280 deaths in Coimbatore. Seven districts, including Kancheepuram, Madurai, Salem, Tiruvallur and Vellore, have recorded 1,000-plus fatalities.

In Coimbatore, fresh cases continued to stay above the 200-mark. A total of 244 persons tested positive in the district. Chennai reported 167 cases, while in Erode, the number of cases dropped to 109 from 125 the previous day. Thanjavur’s daily tally dropped below 100 as 92 persons tested positive, while there were 99 cases in Chengalpattu, a marginal rise from 88 on Friday.

Another 1,610 persons were discharged following treatment. The total number of recovered patients stood at 25,69,771. A total of 16,315 persons were under treatment.

Tamil Nadu’s daily vaccination coverage exceeded six lakh for the first time on Saturday. A total of 6,20,255 persons were vaccinated. The total coverage so far at government vaccination centres has gone up to 3,28,19,859.

The cumulative coverage of private vaccination centres from May 1 stood at 22,00,211.