Oblations to the palate: The Ganesh Chaturthi platter 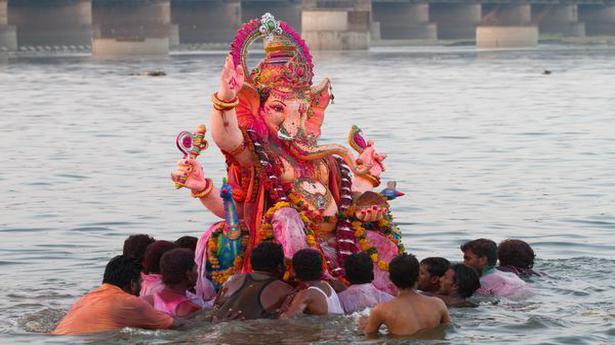 The festival, which kicks off on Friday, is never complete without a smorgasbord of delicacies

Living a seashell’s toss away from the beach has plenty of advantages. Not the least being a hot-ticket seat to perhaps Maharashtra’s biggest religious festival, Ganesh Chaturthi. As a child, come September, I’d patiently wait in the veranda of our bungalow for the Ganpati Visarjan floats, tableaux and dioramas to pass by, enveloped in the fragrant miasma of incense sticks and the jhankaar beats of accompanying nankhatai bands. All this, en route to their final destination, where the faithful would immerse their idols of Ganesha into the murky waters of our little patch of the Arabian Sea off the Dadar chowpatty (beach).

I was, and still am, particularly partial to the pot-bellied Bal Ganesha idols that I dare say I resembled to a large extent as a chubby adolescent. Speaking of which, it was always the food served during these 10 days that got me all excited and salivating. Indulgent Maharashtrian neighbours would ply us otherwise callously carnivorous lot with trays laden with all sorts of vegetarian, mainly satvik, delicacies.

Snacks like puran poli made of flour and filled with sweet lentils and jaggery, srikhand-puri and coconut laddoos were a must.

My favourite has always been the very unique alu wadi that sees colocasia leaves first smeared with a gram flour and spice paste, rolled up, steamed, and then cut in rounds. A tempering of mustard seeds and asafoetida finishes off this superstar of the Ganesh Chaturthi naivedya or bhog smorgasbord.

But perhaps the most interesting of all savoury dishes in the Maharashtrian naivedya spectrum is rushichi bhaji, another must-have featuring the appropriately elephant ear-shaped colocasia leaves. In Maharashtra, the day after Ganesh Chaturthi is celebrated as Rishi Panchami, honouring the Saptarshi or seven ancient sages.

The light-flavoured rushichi bhaji is prepared using seasonal vegetables produced without the labour of oxen. This means foraged vegetables or those that can be grown in one’s backyard, like pumpkin, yam, snake gourd and bits of corn-on-the-cob, are used along with a flavouring of green chillies and coconut.

Despite being the sum of all its 10 (one for each of the festival’s 10 days) veggie parts — along with the aforementioned colocasia leaves that most children hate — I’ve always had my greedy little eyes fixed upon a plateful of this low-on-spice and completely oil-free bhaji, a very simple preparation that’s best eaten with hot rotis made from rice flour or a crisp, griddle-roasted jowar (sorghum) bhakri.

A mainstay sweet of the festival and one that’s said to be Ganesha’s favourite is the very important modak. In fact, ‘Modakapriya’ is one of the many monikers bestowed upon the elephant-headed god. I would wait patiently all year round for my fill of a couple of dozens of modak in all its iterations. Also known as kozhukkattai in Kerala and Tamil Nadu, ukdiche modak is the Marathi steamed version (ukde means ‘to steam’ in Marathi). Stuffed with a mixture of jaggery and coconut, these gossamer-thin rice flour dumplings are mostly coaxed into their mountain peak shape using a special mould.

However, old-timers like our Maharashtrian cook Ratnamala wouldn’t be caught dead using a mould, preferring to intricately pleat the rice dough into shape after stuffing it with the sweet mixture. But she also often replaces this with a boiled carrot-potato-green peas combination for a savoury ukdiche modak that’s not very common, but is now a Ganesh Chaturthi tradition in our home.

Perhaps the greatest of all modak epiphanies I had was in Japan of all places! A sweet called kangidan was presented to me at a temple in Kyoto dedicated to Kangiten, who is considered the Japanese avatar of Ganesha. Made from curd, honey and the popular mochi stuffing of red bean paste called anko, the kangidans are wrapped in kneaded dough made from parched flour and shaped like a bun before they are deep fried.

But another twist on the modak is found here too. Similar to ukdiche modak is the patoli served in some Maharashtrian communities, especially in villages bordering Goa on the second day of Ganesh Chaturthi. They call this day the Konsachem Fest or harvest festival, and the patoli is always a mainstay.

Here, the same coconut-jaggery sweet filling of a modak is stuffed into a rice paste-smeared fragrant turmeric leaf that’s folded horizontally along its spine and then steamed. In Karnataka, a salt-free version of the patoli, called haldi panna pathali, is offered to the goddess Parvati who, according to legend, used to crave it when she was pregnant with Ganesha. It’s reassuring to know that cravings aren’t limited to us mere mortals!

1. Wash, peel (as required) and chop all vegetables and leaves into similar-sized bits so that they cook evenly.

2. In a large pan, combine all the vegetables and leaves along with green chillies and salt.

3. Cover with a fitted lid over which a small cup of water is poured to help in uniform cooking.

4. Cook on low heat till all the vegetables and leaves are cooked well and tender to the touch.

5. Drizzle in tamarind pulp and scraped coconut, mixing well and cooking for a further minute or two.

The Mumbai-based writer and restaurant reviewer is passionate about food, travel and luxury, not necessarily in that order.