In an Arunachal sanctuary, a study has found 500 moth species (including 17 undescribed ones) 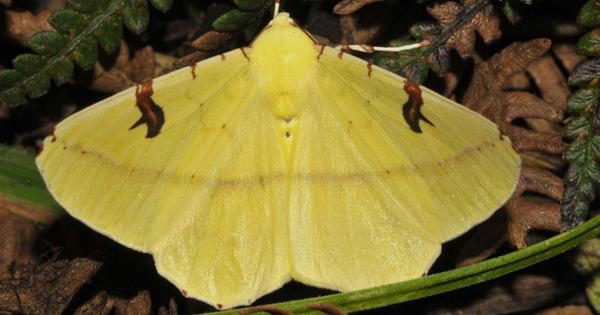 Seventeen new species have been added to the moth fauna of India from Tale Wildlife Sanctuary in Arunachal Pradesh, following moth biodiversity assessments that took place over 29 days in the months of April, May, August and September in 2011 and 2019.

Moths are highly diverse organisms and some scientists estimate there are between 1,50,000 to 5,00,000 moth species in the world. Their colours are either dazzling or so cryptic that easily camouflage with their surroundings. They vary in shapes and sizes. Most moths are nocturnal, while there are some that fly during the day.

The moth diversity of Arunachal Pradesh has been poorly studied. According to the study, during the time of the British in India, the best-studied sites in the Himalayan region were around hill stations. Consequently, in North East India, most historical records for moths are near cities such as Darjeeling and Shillong.

The other areas that were well surveyed were the Naga Hills and Khasi Hills. Arunachal Pradesh, without any major hill city, has been historically poorly studied.

“It is estimated that the number of moth species in India are approximately 12,000, with at least a few thousand undescribed species. It is impossible to assess the moth diversity at Tale, but going by other similar landscapes, there should be well over 1,000 species of moths,” lead author Sanjay Sondhi of Titli Trust told Mongabay-India.

Arunachal Pradesh has 79.63% of its land area forested (Forest Survey of India, 2019) supporting unusually high species diversity and many prominent endemic species and making this a globally important biodiversity area. Tale Wildlife Sanctuary, with an area of 337 sq km, is located 14 km northeast of Ziro, the headquarters of Lower Subansiri district in Arunachal Pradesh.

R Shashank Scientist at Division of Entomology ICAR-Indian Agricultural Research Institute, who is not associated with the study, told Mongabay-India that the order Lepidoptera which comprises butterflies and moths, has the most common insects of the forest ecosystems and agricultural fields. “They are important as suppliers of silk to humans, biological indicators of the ecosystem, and act as pollinators, and also model organisms for many novel research findings” he said.

“Even though we are aware of the importance of these insects we hardly document them systematically. If you look into our knowledge on moth we still depend on British entomologists or naturalist’s contributions,” he said. “The studies such as moths of Tale Wildlife Sanctuary by Sondhi et al (2021) are of immense importance which reports more than 450 identified species with 17 new additions to moth fauna of India.”

Pritha Dey of Centre for Ecological Sciences, Indian Institute of Science, Bangalore, who was not associated with the study, said the study added to insect inventories, which is crucial for biodiversity research and helps in planning future research at the regional scale.

“The study is from one of the most biodiverse regions of the country and is a much-needed addition to the faunal database,” she said. “With new species reported, it adds to the completeness of the species inventory of the hyper-diverse moths, which is a huge boost for understanding the moth diversity in India.”

A book on Moths of Tale Wildlife Sanctuary was released last month by Arunachal Pradesh principal chief conservator of forests RK Singh in Itanagar. The book authored by Sanjay Sondhi, Koj Rinya and Pratibha Riswadkar covers 400 species of moths recorded at the sanctuary and the authors hope that it will be used by the forest department, nature enthusiasts to identify and study moths, help to conserve them and eventually expand the checklist of the moths recorded at Tale in the years to come. The book says high precipitation, fertile soil conditions and lack of major disturbances in Tale has helped in the growth of luxuriant vegetation.

The sanctuary’s expanse of 337 sq km with altitudes ranging from 500 m to over 2,700 m supports six forest types. The primary vegetation in the WLS is subtropical broadleaved forest, temperate broadleaved forest and temperate conifers. The floral diversity of the area comprises species of oak and rhododendron, and numerous species of bamboo and conifer species such as Tsuga dumosa and Abies densa (Pinaceae).

In Tale Valley, conifers grow in the valley, while broad-leaved forests grow on the hilltops. Due to its rich floral diversity, Tale has an abundance of host and nectar plants including magnolias, aristolochias and others.

Divisional Forest Officer of Tale Valley Wildlife Sanctuary Abhinav Kumar said a lot of steps have been taken for the protection of the sanctuary. He said an anti-poaching squad has been formed by the local residents who regularly patrol the area.

“Formation of Tale Eco-Development Committee from residents of neighbouring villages has been done to promote awareness about butterflies and moth conservation,” he said and events like the annual Ziro Butterfly Meet, Ziro Bird Walk are being held in association with local NGOs to promote a wider awareness about rare species at Tale.

This article first appeared on Mongabay.