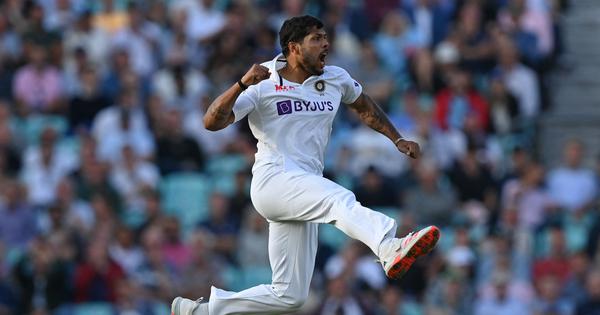 Shardul Thakur marked his return to India duty with a record-breaking fifty that saw the tourists fight back on the first day of the fourth Test England at the Oval on Thursday.

Thakur made 57, including a fifty in just 31 balls – the fastest in terms of balls faced in a Test in England – as he revived India from 117-6 to a total of 191 all out after they had lost the toss in overcast, bowler friendly conditions.

Jasprit Bumrah then removed both the hosts’ openers in the same over before Umesh Yadav captured the prize wicket of England captain Joe Root for 21 after the star batsman, now top of the world rankings, had made hundreds in the first three Tests of a five-match series all square at 1-1.

At stumps, England were 53-3, a deficit of 138 runs, with Dawid Malan 26 not out and nightwatchman Craig Overton on one.

As it happened: England vs India, day one of the fourth Test

Thakur’ innings surpassed England great Ian Botham’s 32-ball fifty against New Zealand, also at the Oval, in 1986 as the quickest in a Test in England.

India captain Virat Kohli, who made exactly 50, was the only other India batsman to pass 17.

England all-rounder Chris Woakes, playing his first Test in over a year because of injuries and Covid complications, took 4-55 in 15 overs.

But the Warwickshire paceman, who replaced left-arm swing bowler Sam Curran, would have had even better figures had not two catches been dropped off his bowling.

England, having seen their openers share a welcome century during last week’s innings and 76-run win in the third Test at Headingley, then found themselves 6-2 in four overs.

Bumrah had Rory Burns playing on five on the Surrey left-hander’s home ground and four balls later he had Hameed, trying to get off the mark with a flamboyant square cut, caught behind for a duck.

It was not long, however, before Root hit two fours in three balls off Yadav – a legside clip followed by a stylish late cut.

Buy Yadav had his revenge when he bowled Root between bat and pad with a ball that seamed in off the pitch.

Before the match there had been speculation over whether India would bring back star off-spinner Ravichndran Ashwin, who has 413 Test wickets and five hundreds, for his first match of the series.

But even on an Oval pitch renowned for taking turn, he was left out once, with India bringing back Thakur and Yadav in place of dropped fellow pacemen Ishant Sharma and Mohammed Shami.

Significantly, India made no changes to their top order despite being dismissed for just 78 in the first innings at Headingley.

First-change Woakes struck with his sixth ball Thursday when Rohit Sharma (11) fended a steeply rising delivery to Jonny Bairstow, back keeping wicket after Jos Buttler missed this match due to paternity leave.

Cheteshwar Pujara, the promoted Ravindra Jadeja and the struggling Ajinkya Rahane were all caught behind the wicket cheaply as they failed to deal with the moving ball.

India captain Virat Kohli, without a hundred at Test level in nearly two years, had looked in good touch on Thursday apart from when he was dropped on 22 by Root at first slip off Woakes.

But Kohli’s second successive half-century this series ended when, trying to turn Ollie Robinson legside, he edged behind for exactly 50.

At that stage, England’s only concern was that all-time great James Anderson had bloodied his whites falling over in his follow through.

But Thakur’s blazing innings, which included two brilliant but correct sixes – a lofted drive over mid-off against Craig Overton and a soaring drive over long-on off Woakes – was cheered to the echo by a large number of India fans at an increasingly sunny Oval.

Thakur, however, was reprieved on 43 when Bairstow fumbled a miscued hook off Robinson – one of several dropped catches in the innings that cost 42 runs in total – before Woakes had the India hero lbw on review.