Blue cheese in a burger at Burgerama 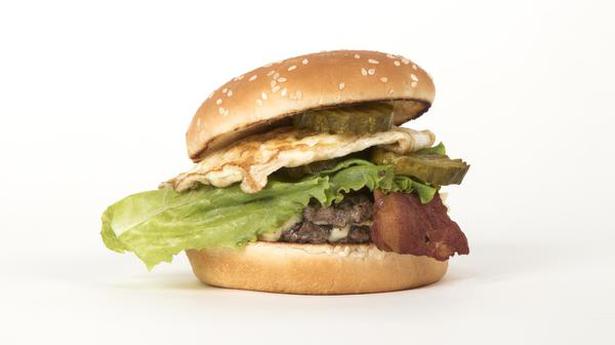 I had my first burger even before I read my first Archie Comic. One of my earlier memories is of a cycle-led cart stopping by the place where I — and a lot of other hungry young lads — lived. The compartment at the back of the cycle was filled with flaky patties and vegetable burgers — essentially a potato patty between two small soft buns. I preferred the burgers to the patties, which were so flaky that they disintegrated when you touched them. The vendor would place one on a paper plate and squeeze some ketchup on the side. Food couldn’t ever get better, I used to think, biting into the bun-and-potato.

Over the years, burgers have gone through a metamorphosis. I think my first classy burgers were at Wenger’s restaurant, just above the confectionery, and then, several years later, at Nirula’s in Connaught Place. Until some years ago, burgers were simple dishes — two pieces of soft bun holding together a juicy lamb or chicken patty. The buns were often speckled with sesame seeds, the insides were brushed with mayo or sometimes with thousand island sauce. A crisp lettuce leaf and rings of onion added taste and texture.

But that was then. Over the past few years, I have had various kinds of burgers, prepared with imagination and ingredients such as blue cheese, caramelised onions, imported bacon, celery slaw, fried eggs and what have you.

A foodie friend mentioned ordering burgers from a place called Burgerama. I had heard about it, too, but hadn’t tried out their fare. It is a delivery chain that serves Delhi-NCR (order at burgerama.in or on Zomato; ₹215 to ₹545). I learnt later that it was the brainchild of three friends and the focus was on cheeseburgers.

Ours is a meat loving home, so when we looked at the website, the focus was on different kinds of meat. We agreed on a bender lamb burger, bacon double cheese chicken burger, and T-Rex tenderloin burger. The sides consisted of onion rings, French fries, hot wings, and galaxy bombs (Panko-crusted deep fried chocolate).

I liked the sides, especially the crispy wings and the crunchy onion rings. The potato fries were a bit limp, though, but that could have been because of the weather.

What I really enjoyed was the bacon wrapped lamb burger. I had a large bite from it and thought the bacon had given the lamb a nice kick, and the fried egg and smoked paprika mayo had added to the taste.

The quarter pound patty of the tenderloin burger came with caramelised onion, a cheese blend, lettuce, pickle, and a blue cheese dressing. I enjoyed it, but would have liked it more had the patty been softer. But I suppose you can’t have the tenderloin rare when you are running a delivery outfit. The chicken and cheese burger got a thumbs up, too, as did the delicious galaxy bombs, which were crisp and sweet.

Burgers, clearly, are not what they used to be. For burger lovers, there’s a whole new world out there. Blue cheese, anyone?