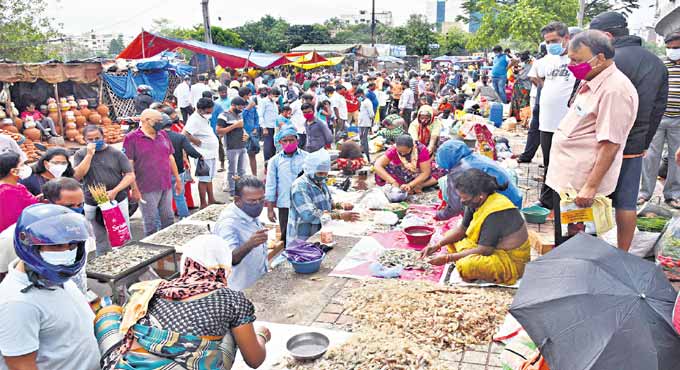 Hyderabad: As Telangana along with other Indian States, deals with a gradually receding second wave of Covid infections, the continued circulation of the coronavirus and the threat from new and more transmissible emerging variants has now created a possibility of having to face a third Covid wave in the coming months.

With Europe and the United Kingdom already experiencing the initial phases of the third wave due to alpha and beta variants of SARS-CoV-2, senior public health officials here agree that a similar wave, although the scale of the impact and timing is too early to forecast, could be a reality across the country.

In the backdrop of a possible third wave of Covid infections due to non-stop circulation of the virus and new mutations, people in Telangana cannot afford to ‘drop their guard’ and succumb to the same mistakes that had led to the present second massive Covid wave of infections in the months of March, April and June, officials said.

A majority of the epidemiologists, virologists and public health specialists, even in Telangana, are clearly forecasting a third wave of Covid infections. However, virologists also agree that the intensity and scale of a possible third wave would depend on several conditions including the amount of vaccination taken up and the resultant herd immunity at the community level, Covid appropriate behaviour on the part of the population, and more importantly how the new variants of concern and mutations behave, in the coming months.

By the time of a possible third wave, a large section of the population comprising elderly and high-risk individuals might have already received Covid vaccines, which could certainly reduce the impact of such a wave.

However, at the same time, experts also point out that mutations could create a new variant that could possibly escape the immunity offered by Covid vaccines. As long as the SARS-CoV-2 virus remains in circulation, it will continue to replicate and mutate, leading to new variants, public health experts warn.

“It’s better to be prepared in advance for subsequent waves of new Covid infections and take public health measures accordingly. That’s the reason why, the State government has started investing in medical infrastructure like adding more oxygen lines, creating more diagnostic facilities and above all, vaccinating high-risk populations,” senior officials familiar with the issue, said.

In a recent interaction with presspersons, NITI Aayog member and noted scientist Dr V K Saraswat had said that the third wave could hit India somewhere in September and October, which gives ample time for States to ramp up vaccination efforts and individuals to prepare for such a possibility.