Some tech care from seniors 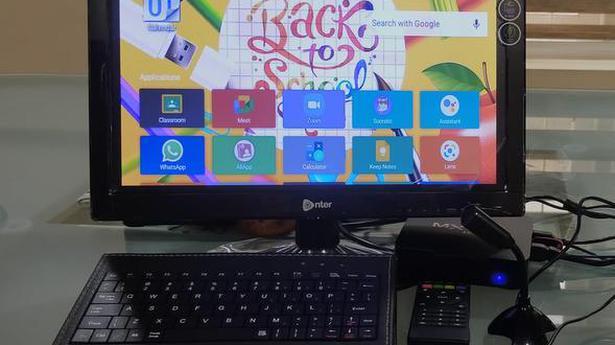 When they chose to sponsor the online education of the poor students of their alma mater, the old students of Haji Essa Haji Mussa Memorial School at Mattancherry did a bit of out-of-the-box thinking.

Rather than simply buying them smart phones or laptops, they designed a customised mini computer of sorts powered by an Android box thanks to a couple of software engineers in their ranks.

“We replaced the Operating System (OS) of the Android box to reduce its weight and restrict it to educational tools and applications alone. The programme also offers room for the addition of more tools and addressing security breaches,” said Nishanth Saifudeen, an alumnus and France-based software developer who is back home on leave.

This effectively locked students out of unwanted diversions like social media and online games. “Initially, we thought of buying students smart phones but dropped the idea for fear of misuse. Besides, a customised computer costs just ₹7,000, which is much lower than an average smart phone,” said Abdul Gaffoor V.S., another alumnus. Fifteen such computers will be distributed by this month-end.

Android boxes available in the market and 15-inch screens have gone into the making of the computer. The Android boxes are mainly media-centric necessitating a change of OS to customise it for educational purposes.

The system also limits the daily usage of the education-specific search engine. Even the usage of USB port is restricted to block out unwanted content.

“With the help of our socially-conscious tech colleagues in France, we plan to develop tools that will help teachers monitor and derive statistics for performance analysis without intruding into students’ privacy,” said Mr. Saifudeen.

School alumni from batches dating back to 1965 are associated with the initiative. The school was set up by the late Khan Sahib Ismail, former chairman of the erstwhile Mattancherry municipal council, in 1936 to address the educational backwardness of the area. Among its decorated alumni include the late legendary ghazal singer Umbayi.