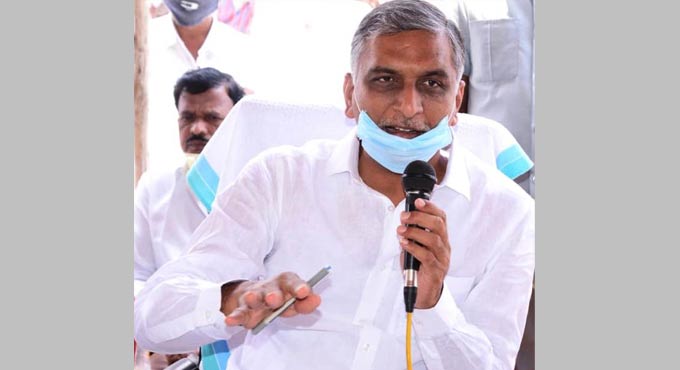 Hyderabad: Finance Minister T Harish Rao on Saturday strongly condemned the repeated attempts of former Minister Eatela Rajendar to drag him into the latter’s problems during press conferences, and declared that he was a committed, loyal and disciplined worker of TRS party. Stating that he has been working to achieve the party’s goals since it was founded in 2001, he stated it was his duty as well as responsibility to complete any task assigned to him by the party and its leadership.

In a statement issued rubbishing the allegations made by former Minister Eatala Rajender after he had quit the party, Harish Rao stated that K Chandrashekhar Rao was not only his party President, but was also his teacher and guide as well as a father-figure to him. “I have repeatedly said on many occasions and would like to clarify once again. I will follow the orders of the Chief Minister until my last breath and will never cross the line,” he declared. He asserted that he was duty-bound to obey the orders of the party President and Chief Minister K Chandrashekhar Rao.

The Finance Minister ridiculed the statements of Rajender stating that the latter was behaving like a monkey trying to destroy an entire forest. He may have many reasons to leave the party and it is his decision to stay or quit the party, but his absence will not make any difference within the party. “The opportunities given to Rajender by the party were greater than the services he rendered to the party,” he said, adding that resigning to the party memberships and the MLA posts was a decision taken by Rajender

Harish Rao found fault with his former colleague for repeatedly dragging his name to garner support from the people. This is a testament to the lack of compassion, wisdom and conscience. He termed the latter’s attempts to drag his name into the issue, was a failed and distasteful attempt. He stated that there was no truth at all in Rajendar’s words.