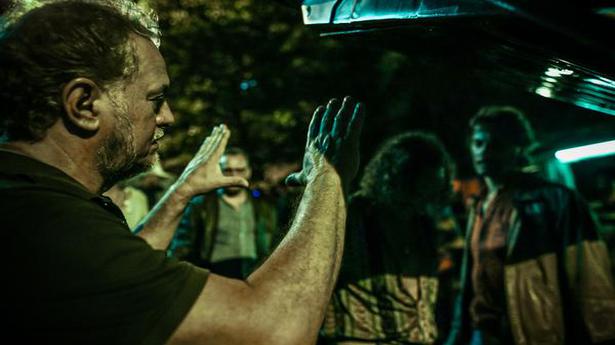 Fact is often stranger than fiction and Dom, a Brazilian Amazon Original series, is the latest example. The show tells the story of the conflict between Pedro Dom, (Gabriel Leone) a notorious criminal in Rio De Janeiro, and his father, Victor Dantas, (Flávio Tolezani) an undercover policeman.

Speaking from Rio De Janeiro, director and showrunner, Breno Silveira hopes the story will travel around the world. “Victor came to me when his son died 12 years ago. We had all heard of Dom, a leader of a criminal gang and famous in the 1990s in Brazil. Nobody knew that his father was a police officer, an undercover agent.”

Breno and Victor co-authored two books on the subject. “One day, he told me he was dying of lung cancer. From the hospital, he would send 10 to 12-page long emails. Victor passed away two-and-a-half years ago. His dream was to tell his son’s story, because everything people knew about Dom was what was published in the newspaper. He said, ‘I don’t want to die without letting the world know my son’s true story’.”

The casting was intuitive, Breno said. “I found Gabriel during a conversation, I was sure he would be Pedro, because of his smile and his charisma. He is true and authentic. I always knew that Dom was an authentic person, without any fears of life. I chose Flávio for Victor after a rehearsal. Victor was temperamental and explosive; I found this quality in Flávio.”

Speaking from Rio De Janeiro, Gabriel says, “Dom was an adrenaline junkie. He enjoyed taking risks and being in dangerous situations. I knew that I had to stimulate a very specific kind of energy in every single scene and I worked very hard on that. Though most of the father-son scenes were of conflict and fights, there was also love. People should realise that the fighting came from a loving relationship that was going through chaos.”

The role was interesting to Gabriel because of the chance it gave to explore different emotions. “Pedro is a beautiful character. It was a famous story during the 90s, but now we have few records and they are not accurate.”

Flávio, speaking from Sao Paulo, said Breno had a very specific vision for Victor. “ We had a rich exchange of ideas. He told me Victor’s story and I gave my opinions and we saw if I could fit in the landscape that Breno was putting me in. It is a rich story, specially these two characters, who have a unique complexity. For an actor, it is a full playground, you have everything within these characters.” There was specific research for the action scenes, Flávio said and also for the story.

Breno hates to shoot in studios. “They are cold and have no memory. If you shoot in a favela, you have a true home. Locations bring up things. We shot in 170 locations for Dom. We travelled all over Brazil. Victor worked outside Rio a lot and so we shot in several corners of Brazil. It was challenging for the team but at the same time when we shot in a favela, we met people who said ‘I knew Dom, he was my friend’. Others said ‘I remember Victor when he was younger and came here’.”

Shooting on location created memorable moments for the actors. “When I was a kid, I watched funk parties on TV,” Gabriel said. “For Dom, the party was recreated in a favela with 400 to 500 people and it was an impacting experience, as I had not attended a funk party before.”

“The funk party when Victor goes to pick up his son was memorable,” agrees Flávio. “It was an action scene but there was drama as well. The complexity of the scene, and the adrenalin coursing through your veins at shooting amid 400 to 500 people and 100-strong technical team was really memorable.”

The Portuguese show is being released in four languages in India— English, Hindi, Tamil and Telugu. Malu Miranda, Head of Brazilian Original Content at Amazon Prime Video says, “In Brazil, people watch shows from Spain or France in Portuguese and they love them. I hope we can have the same effect on audiences around the world.”