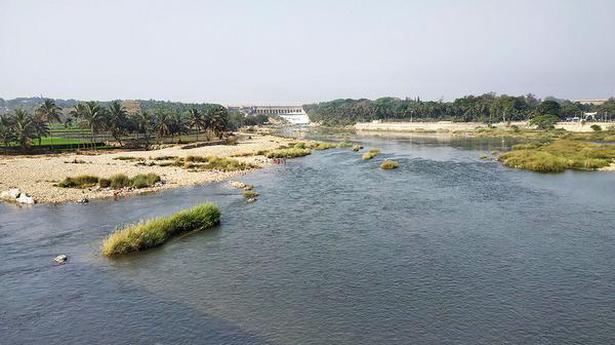 For the third year in a row, Tamil Nadu received a higher quantity of Cauvery water during the water year 2020-21 (June-May) than its quota.

Against the 177.25 tmc ft (thousand million cubic feet) prescribed by the Supreme Court, the State realised 34 tmc ft in excess. As per the readings taken by the Central Water Commission in Biligundlu on the inter-State (Karnataka-Tamil Nadu) border, it netted around 211 tmc ft from June 2020 to May 2021. But this was lower than what Tamil Nadu got in the previous two years — approximately 405 tmc ft in 2018-19 and 275 tmc ft in 2019-20.

This was the second time in the last 20 years that the State recorded, at least for three consecutive years, higher realisation than its due. The previous occasion was the period from 2005-06 to 2011-12, when Tamil Nadu received a minimum of about 210 tmc ft in 2008-09 and a maximum of around 384 tmc ft in 2005-06. On an average, the annual realisation during those seven years was around 269 tmc ft.

It remains to be seen whether the State’s luck would continue this year, too. There is an expectation among water experts in the State that the realisation during the year would be good, considering the favourable forecast on the southwest monsoon (June-September). Of the State’s overall share of 177.25 tmc ft, the four months account for 123.14 tmc ft. The State is dependent on the Cauvery flows during the period, as it does not benefit much directly from the monsoon, though water is required for sustaining paddy, raised as part of the short-term Kuruvai cultivation season, and commencing preliminary operations for the long-term Samba season.

Last year, the State’s realisation during the southwest monsoon was 120.22 tmc ft, about 3 tmc ft short of its share. But, as in the past, it was during the northeast monsoon (October-December) that the State realised 75 tmc ft, though its quota was 41.35 tmc ft for the three months. Generally, the farmers of the Cauvery delta themselves are not reliant on supplies from the Mettur dam — the lifeline for agriculturists — during the northeast monsoon as the delta would even otherwise be reeling from heavy rain in those months.

The government is yet to announce whether it would commence water supply from Mettur for irrigation on the scheduled date of June 12. As on date, the water level stands at 97.22 ft (full level: 120 ft), with storage being 61.3 tmc ft (capacity: 93.47 tmc ft).

Though the Cauvery Water Management Authority and Water Regulation Committee have not yet informed the States of the Cauvery basin about their customary meetings at the beginning of the water year, they are expected to have their deliberations shortly.