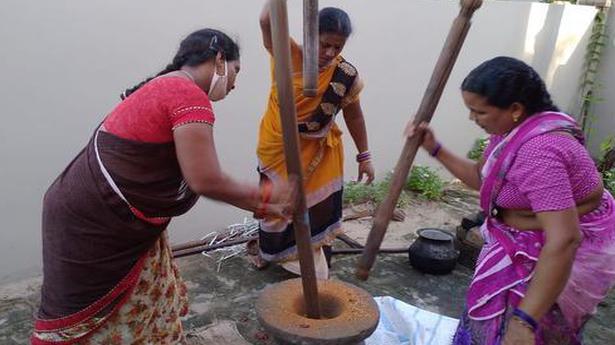 Old has certainly turned out to be gold for Jyothi Sri Pappu, who has been championing traditional food mixes through Nutreat, her startup based in Malikipuram, Andhra Pradesh, since 2015. “When my son Jai was born in 2013, I wasn’t too keen giving him the packaged baby foods in the market, because as a Pharmacy graduate, I knew the chemicals that go into such mixes. So I asked my mother and grandmother for natural and healthy alternatives from their kitchen,” says Jyothi.

Since the pandemic began, Nutreat has been up skilling village-based homemakers and engaging in fair-price marketing with farmers through its ‘Project Sanative’.

“Many women who used to work in the cashew factories in Mori and the weaving industry in Goodapalli, for example, have been laid off during the pandemic. Through Project Sanative, we launched regular groceries like flours, dal, spice powders and semolina in November 2020, which are cleaned and packed by our women employees. Helped by the NGO Smart Village Movement (SVM) we have trained these women not just in hand-crafting our mixes, but also in financial management,” says Jyothi.

For its product range, the project buys the crop directly from the farmers who do ZBNF (Zero budget natural farming) and organic farming.

At present at least 20 women from Malikipuram are employed by Nutreat. “The number varies depending on the orders. The women were okay with this kind of work, because this was something they could do while they watched TV. From the initial 25 kilos, now each of our helpers is capable of processing almost 100 kilos per week,” says Jyothi. Since the women can to work from their homes, quality checks are done by Nutreat while they prepare the orders, and get them ready for delivery.

The taste of India

Jyothi said she began with uggu, sprouted ragi that is traditionally hand-ground in stone implements and fed to infants from their sixth month, in Andhra Pradesh. “After that, according to his age, my mother started adding lentils and dried fruits. We also make uggu with aged brown and red rice,” says Jyothi.

Nutreat’s catalogue now includes scores of general recipes that are categorised under ‘Inspired by India’, ‘Inspired by Nature’ and ‘Fusion Food’. “We have 100 standard products, but we have customised almost 7,000 recipes till now. We make the mixes depending upon the region and season,” says Jyothi. With no corporate tie-ups, Nutreat has reached out to customers across India, as well as the United States, Scotland and Australia, purely through word of mouth.

Along the way, some things have remained constant: the entire process is manual and as true to tradition as possible. So the ingredients are first sun-dried to prolong their shelf life, and then processed into flour using stone pestle and mortars or manual grinders. Where required, the raw material is roasted in clay pots, which adds a smoky depth to the flavour. “The fan is the only electrical appliance in my kitchen,” laughs Jyothi.

Nutreat has been skilling women workers in packing groceries during the pandemic. Photo: Special Arrangement/THE HINDU

“We try to build a bond between our helpers and the customers, by arranging a video conference call to show when their food mixes are being prepared. Since we are an order-based business, we don’t stock anything in advance. Customers know that if they book today, they have to wait almost for two months, depending upon the season, for their turn to come, because factors like sun-drying during rainy days can cause delays,” says Jyothi. Every order adjusts the mix according to the medical and dietary requirements of the customer.