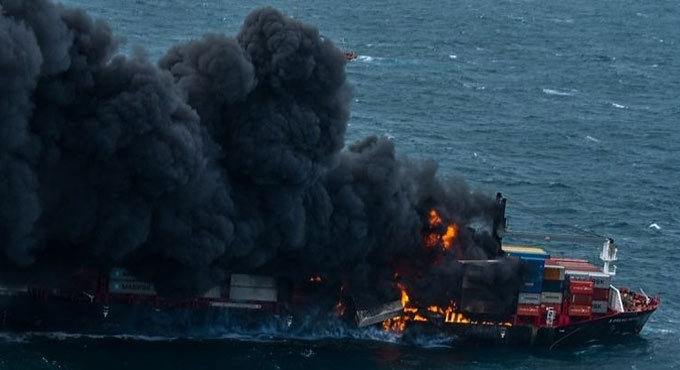 Colombo: The Sri Lanka Navy said it was continuing fire fighting efforts onboard the container ship X-Press Pearl, which has been burning for the eighth consecutive day in the waters off the Colombo Harbour.

Navy Spokesman Captain Indika De Silva told Xinhua news agency that teams continued to be on scene to douse the flames and the fire had been confined to the back of the vessel.

However, he said efforts were being hampered by heavy winds and inclement weather conditions.

The assistance from India was in place on Tuesday, De Silva said.

There was a threat of the ship sinking on location, and all efforts were underway to prevent this, according to the spokesperson.

There was also no sign of oil spill as yet, the Navy said.

The ship had slightly tilted to its right as of Thursday afternoon.

The Marine Environment Protection Authority (MEPA) has warned of a major environmental disaster and was conducting investigations to assess the impact of the burning vessel.

The MEPA on Thursday said it had lodged a complaint to the Colombo Harbour Police to take legal action against the captain of the fire-engulfed ship and its parent company over the environmental damage it had caused.

Visuals released by local media showed that beaches extending from Colombo to Negombo on the west coast, had been polluted from debris from the burning ship and the police had warned people not to touch it as it may be harmful.

The X-Press Pearl is registered under the flag of Singapore and was carrying 1,486 containers with 25 tonnes of Nitric Acid and several other chemicals and cosmetics from the port of Hazira, India on May 15.

The vessel sent out a distress call while being close to the Colombo Port on May 20, and soon caught fire.

The Sri Lanka Navy said it had rescued 25 crew members from the cargo ship.

Two injured Indian nationals among the rescued had been hospitalised for treatment, and one of them had tested positive for Covid-19, according to the health officials.

The distressed container ship had crew members who are Philippine, Chinese, Indian and Russian nationals.