Last of the shaukeen Kayasth men 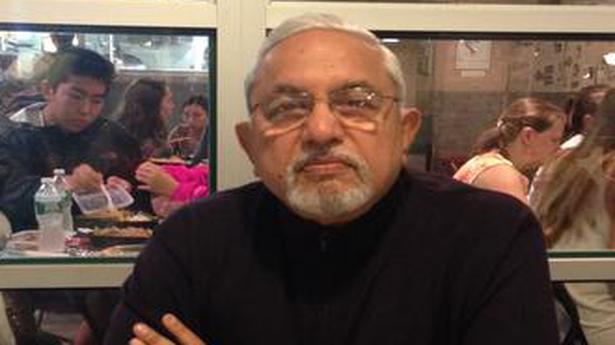 How my father Rajeev Rishi, a bon vivant and amateur chef, gave us life lessons through his food and left an indelible mark on Avadhi cuisine

The day before he came down with a fever, my dad (72) sent me a bowl of satpaita, a typical winter preparation of split urad dal and methi greens, part of our family’s rich repertoire of Avadhi cuisine. “Who eats satpaita in summer? It is too heavy,” I retorted on the phone, when he called to ask if I wanted some. “We,” my dad said, using his royal Lucknowi “we” (instead of “I”), “felt like eating it,” and sent it across. I ate much of it with enthusiasm that afternoon, warm weather notwithstanding, and then stowed away some in the fridge.

The next day, dad tested positive for Covid-19, as did my mother and brother, and the world changed irrevocably. For a few days after, however, I still believed all was well. That dad was only mildly ill. In fact, it was a delusion the entire family remained under till that last evening when he boarded the ambulance and went into the ICU unescorted — never to come back. The bowl of satpaita sits in my refrigerator; now a memory to be preserved.

As a finely-worded obit emailed to me described him, my dad was a bon vivant, the last of a line of shaukeen Kayasth men, belonging to the liberal community of medieval scribes, known to patronise the arts and culture, and who liked to live life king size. Generous to a fault, fond of cooking and music, dad was happiest when sharing these passions. Before the pandemic made physical gatherings impossible, he and some relatives and friends had been regular with their musical baithaks held once a month, soirées organised in each other’s homes in which all participants would sing carefully-rehearsed songs, accompanists having been hired for the occasion. The baithaks would end inevitably in a lavish repast prepared by the host, and when my dad’s turn came, there would be demands for his bhuna meat or badam parsinde, recipes going back centuries that he had perfected.

Last year, Zoom took over. Musical performances were now shared on it instead. And sometimes he would send us recordings. “By sadabahar Rishi,” (‘Evergreen Rishi’; Rishi being his last name) reads a message on my WhatsApp: two songs that I never opened or heard, and now cannot bring myself to. They must remain evergreen, like the satpaita sitting in the fridge.

Music and food have been twin legacies of a larger composite Kayasth culture and way of life that I have repeatedly written about. That world is now lost. The legacy lived in dad. My interest was always that of an outsider, of someone examining a slice of life.

Through all of last year, as the pandemic took over and he stopped going to office, instead letting my brother lead his engineering consulting business, he cooked more and more. Treats of dum ka kathal, made with tender jackfruit, bhuna meat, takey paise (‘coins’ made of besan), and bathua would arrive at our house regularly, along with gifts of the finest mangoes, chocolates, even gin and wine.

I often posted it on Instagram, and they received enthusiastic responses. Truth be told, I cannot cook even a fraction as well as him. No one could. At least his style of UP-ish food. Or his Rajasthani lal maas. Or his platform aloo — inspired by the poori-potato gravies of yore at railway stations like Kanpur that he remembered from his extensive rail travels as the son of a senior Railway officer.

You had to eat what he cooked to believe in “haath ki baat” — shorthand for expertise at spicing and bhunoing (browning to concentrate flavours, a key technique for all Kayasth dishes). The fact that he cooked to approximate the memory of an older tradition, and to match his keen palate, made his food impossible to replicate. That’s why some dishes I will never eat again. Like badam parsinde. A Delhi Mathur dish, parsinde (from pasand, or choice, connoting the choicest cut of goat meat) doesn’t get made often, even in homes. You need to know the best cut, how to score and flatten it, and cook it well. Dad had picked up the recipe from Gopal Pande, a wedding cook, who catered at all my grandparents’ functions. Then he tweaked the recipe — which is the version in my book, Mrs LC’s Table. Despite the recipe, neither I nor any of an impressive list of chefs with whom I collaborated for various pop-ups have been able to cook this dish satisfactorily.

Even his made-up creation, “green” chicken with coriander, favoured by my sister, cannot be cooked just so. Dad always included it in his meticulously-planned menus when she came visiting from the US. Extremely methodical and a maker of lists, he would chalk out menus for every meal, for every day she was with us, and note these down in his diary. “So we don’t miss out on cooking all her favourite dishes,” he’d reason.

But for all his extreme attention to detail, my dad cooked with instinct and heart. Recipes were tweaked “to make them better”. A DIY kit of khade masale ka bhuna gosht, a 150-year-old Kayasth dish that makery.in recently launched as a DIY kit in collaboration with me, was not turning out right, till I sent it to him for suggestions. He got back with a favourite trick of adding browned onions. When it was finalised, Rohit Khattar (whose children launched makery.in) pinged to say, “This is the best meat gravy I have ever had… I have been eating it every day at home.”

Like all passionate cooks, dad loved to cook for others. He cooked the toughest and intricate dishes at the many food festivals I put together across hotels in India from 2010 to 2012. They were rigorous affairs, where dad, my aunt Minoo and I cooked for 10 days each in hot kitchens. I got bored and impatient. Dad never did. Finally, I had to stop because the format was too physically demanding. Those who ate his food remembered it for years after, including chef Manjit Gill, who came for our first festival. He sent me a condolence message: “Your father left an indelible impact”.

Dad would have been happy to hear it from the country’s senior-most chef. But he would have grandly announced, “I only cook for my children”. And so it was. Food, that was an extension of his love for us and for life in general.

Anoothi Vishal is a Delhi-based food writer and author.