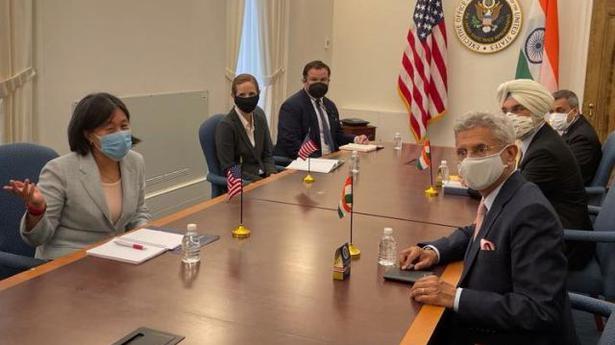 Conveyed appreciation for U.S. solidarity in addressing the Covid challenge, the Minister says.

External Affairs Minister S. Jaishankar has had a hectic day and a half in Washington DC, where he met government officials, including National Security Advisor Jake Sullivan and the U.S. Trade Representative (USTR) ambassador Katherine Tai, lawmakers, and the private sector.

Mr. Jaishankar, who is on his first visit to the U.S. during the Biden administration, met with Mr. Sullivan on Thursday. Both sides indicated that there was a discussion on regional (Indo-Pacific) or global issues, with Mr Jaishankar specifying, via a tweet, that Afghanistan came up.

“Conveyed appreciation for US solidarity in addressing the Covid challenge. India-US vaccine partnership can make a real difference,” the tweet said.

The U.S. readout said Mr. Jaishankar and Mr. Sullivan “welcomed” cooperation that has resulted in the delivery of over $ 500 million in relief materials (state, federal and private sector sources) from the U.S. to India.

“They agreed that people-to-people ties and shared values are the foundation of the U.S.-India strategic partnership that is helping to end the pandemic, supporting a free and open Indo-Pacific, and providing global leadership on climate change,” it said.

Mr. Jaishankar said he had “good discussions” with Ms. Tai, who recently announced that the Biden administration would support an India-South Africa initiative at the World Trade Organisation (WTO) to waive intellectual property protections for COVID-19 vaccines.

“Our trade, technology & business cooperation are at the core of our strategic partnership. Enhancing them is vital to post-Covid economic recovery. Welcomed her positive stance on IPR issues & support for efficient & robust supply chains,” Mr. Jaishankar said on Twitter.

The Hindu had reported that procuring vaccines and sorting out issues around this, such as early Emergency Use Authorisation and liability are central to Mr. Jaishankar’s trip agenda, though officials have been keen to stress that this is not the focus of the visit and that discussions would cover a more comprehensive list of topics pertinent to the strategic relationship between the two countries.

The USIBC meeting included a discussion on how the private sector, working via a consortium of 40 companies called the ‘Global Task Force for Pandemic Response’, could “support India’s health infrastructure and further ways to continue relief efforts,” said Priyanka Sethi, a spokesperson for the group.

Pfizer and Johnson and Johnson – both companies that manufacture COVID-19 vaccines of interest to India – are part of the Task Force. The group has sent 1,000 ventilators, 4,850 oxygen concentrators to India and convened the chief HR officers of close to 200 companies to help their employees and their families, Ms Sethi said.

Representatives of pharmaceutical firm Abbot and courier and shipping firm FedEx were among the companies present at the USISPF meeting, industry sources told The Hindu.

Mr. Jaishankar also spoke on the phone with the (Democratic) Chairman of the House Foreign Affairs Committee, Gregory Meeks and its ranking member (Republican) Michael McCaul. He also had a phone call with House India Co-Chairs Steve Chabot (Republican).

Brad Sherman, the other co-chair, was among those present at a dinner for Mr. Jaishankar on Wednesday, at the house of Indian Ambassador Taranjit Singh Sandhu. Others present there, according to US official sources, included Virginia Senator Tim Kaine, Senator Michael Bennet from Colorado and Jon Ossoff, the new Senator from Georgia.

On Friday, the Minister is scheduled to meet with Defense Secretary Lloyd Austin and Secretary of State Antony Blinken who has been on a trip to Egypt and West Asia since Monday.

According to sources, the high-level ( Minister level) meetings with the Treasury, Commerce and Energy Departments, US Agency for International Development (USAID) and the National Science Foundation are likely to take place during Mr Jaishankar’s visit to Washington.