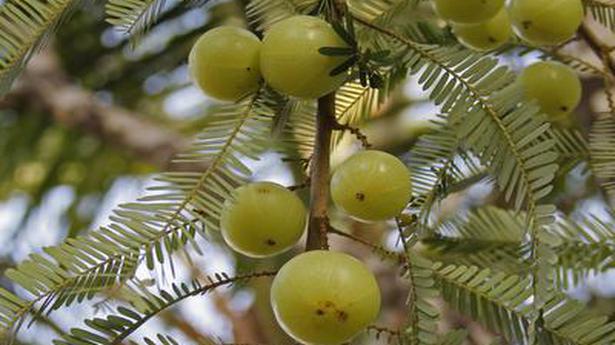 Large orchards or a tree in the backyard, salted amlas by the roadside or tea infusions — everyone has a story to tell about this small, nutrient-packed green fruit

Prerna Sood has begun her day with a shot of amla for as long as she can remember. Her grandmother had ensured everyone at home joined in — a tradition Sood continues to this day with her own family. The Noida-based architect, food lover, and fermenting addict sources her amlas from a local farmers’ market.

Since the lockdown began last March, with doctors highlighting the importance of good immunity, many have rediscovered this commonplace powerhouse of vitamin C. Our days now begin not with tea or coffee, but with a shot of this bitter-sour juice, with its final rush of sweetness, packed with nutrients and immunity boosters. But even before the coronavirus came calling, amla has been a vital ingredient in most Indian homes. It would be boiled with salt water, hing and turmeric, to make an oil-free pickle; ground and stirred into a thokku; grated and added to curd for a raita; or cooked with dal for a deeply-flavourful side dish. Amla has also been a part of native medicine, and its dried and candied versions have come in handy as digestives.

For many of us, no wait at the school bus stop was ever complete without buying large amlas with crinkly skin, soaked in glass jars filled with salted yellow-red water redolent of hing. Long after the soft fruit was eaten, we would delight in the saltiness of the seed.

Now the world is discovering the Indian gooseberry — different from its cousins in the Americas and the Continent that are smaller, grow on spiky bushes, and are perhaps a tad less sour. According to recent news reports, KoreaShop 24, which facilitates trade between India and the South Korean market, closed a deal for Nature Factory, a company based in Seoul, to export amla extract worth ₹85 lakh. With the growing demand for immunity-boosting Indian gooseberries in Korea, the order is expected to go up, based on the reception.

Meanwhile, back home, as demand continues to grow, we take a nostalgia break with farmers, bloggers, writers and homemakers about their memories of the gooseberry.

“We lived in Darjeeling for 35 years and my earliest, fondest memories are of the Margaret’s Hope Tea Estate in Kurseong, where my father was,” says Singh, 50. “Bhansghadi was a bamboo grove with gorgeous orange and gooseberry trees. When my brother and I visited from boarding school, workers would bring bamboo baskets full of sweet-sour orange and fresh amla. It was exciting to bite into the amla and drink water. I still remember that sweetness.”

Years later, when she began making tea infusions as part of Anandini Himalaya Tea, an offshoot of her family’s 160-year-old Manjhee Valley Tea Estate (which they have been running since 2003), Singh wanted to focus on things that she had a bond with — places and memories. “I was fascinated by ingredients that triggered emotions. It could be a flower or something available for a small window of time. In 2015, the Nagaland government asked us to create a blend to gift dignitaries who visited the annual Hornbill festival. And so was born the Hornbill Grandeur, a green tea with amla, wild apples and moringa. It’s a beautiful blend, very simple and subtle with a hint of sweetness, and it’s very healthy without being medicinal,” she says. “I am glad we did it. Gooseberry is becoming very popular now and no one usually associates it with tea, but it’s delicious.”

“I literally grew up on the factory floor,” laughs Varier, 58. “I’ve been seeing amla [or nellika, as it’s called down South], both fresh and dry, since I was about seven, and I have a deep respect for it.” He tells me that there are broadly two types of gooseberries: the country and the grafted variety. The former produces small fruits, as compared to the grafted ones such as Krishna, NA7 and BSR1 — which grow to 10 ft in height. He has about 60 amla trees in his enterprise’s garden, five of which are native.

He remembers hearing stories about how people “would cut the trunk of the nellika tree and drop it into wells, to purify and sweeten the water. These would endlessly lie at the bottom. In fact, in Malayalam, there is a saying that references this: ‘Kshamayude nellipadi kandu’ [meaning, I’ve reached the end of my tether, I’ve reached the nellika logs in the well,” he says, to underline how integral the amla is to us in India.

Amla with fish in Guwahati, Assam

“Amla is an integral part of life in the East. Growing up in Barpeta in Lower Assam, we had a 40-year-old tree at home that fruited liberally twice a year. My grandmother and mother would cook with the amla with fish, and make mukh suddhi with dried amla [much like a paan, and used as a mouth freshner]. Even now, my mother sends it across to me, annually. They also dry the amla and powder it for later use, and send it to those who lived in other cities,” she says. Today, Dutta, 35, incorporates the fruit in her family’s diet by adding it to a dal, so that its sharp flavour mellows down. “I add it to moong or masoor, and temper it with cumin or fenugreek seeds. It’s delicious and aromatic. Fish and mashed amla also make a good combination.”

When Bhargava, now 56, moved out of Delhi to buy a parcel of land near Khajuraho in Madhya Pradesh, his family wondered if he was making a mistake. It was a drought prone area. A horticulturist, however, gave him a list of trees that would thrive there. Today, over 2,000 amla trees dot the 400-acre, rain-fed farm. “During a good season, each tree will yield about 250 kg. In 2019, I was told to sell the excess fruit. But I was offered ₹4 per kilogram during winter, and got ₹4,000 for a quintal!” he recalls.

So, last season, Bhargava introduced an amla-garlic chutney at Little Farm. “This year, we launched pickles, which did very well. Now, I’ve decided to launch one new amla product a year — sharbat, chyavanprash, amla candy, and the like.”

“The gooseberry has a complex, savoury tartness that comes from its diversity of acids: malic, shikimic and citric. Depending on when it is plucked and the variety, the flavour profile can vary from sweet and tart, to astringent,” explains Ashok, 44, who cooks with it extensively. “It can be directly used as a souring agent, in much the same way as raw mango is used. Amla dal, for instance, is a fantastic way to use this fruit.” Breaking down the science behind why water drunk after eating amla tastes sweet, he says, “It is because of Vitamin C, which is water soluble. It is chemically very similar to glucose, and thus its solution tastes sweet to our taste buds. Since cooking tends to reduce some of its nutrition, Ashok suggests that a good way to enjoy the raw fruit is to lacto-ferment it. “Let it sit in a 2% salt solution for two to three weeks, The lactobacteria will convert the sugars in the fruit to lactic acid, which has a much milder sourness. Fermentation also increases bioavailability of other nutrients such as iron,” he says, adding that fermented amla works well in dishes, lending a complex sourness combined with the umami from the proteins broken down by the bacteria.

“Amla is the king of trees,” Bindra, 85, says, adding that her 25-year-old tree at home is “beloved” and still fruits profusely. The season is over, but “a few fruits drop down every now and then”, which works well for her as she eats an amla every day.

“When it fruits, we distribute it in the neighbourhood and to friends. This is an incomparable tree. If anyone has space, they should grow it. It is very aesthetic,” says Bindra, whose amla tree lords over the first storey of her house.

“Growing up in Imphal, we had an old amla tree at home that fruited profusely. We dry it and turn it into a variety of pickles — with salt, jaggery and other spices. I grew up listening to the story of the deer that ate an amla and drank water from a pond and told the other deer that the water from the pond was sweet. Likewise, we would eat freshly-plucked amla and drink water. Now, I consciously eat it knowing it is a powerhouse of vitamins,” says Hauzel, who lives in a condo complex in Gurgaon.

When she spots the familiar leaves, she is still overjoyed. “It’s very nostalgic,” she adds. “I walk around the tree with such longing; sometimes I find a fruit or two on the ground that has escaped the sweeper’s broom. Recently, that nostalgia was intense when my sister sent me a photo of the fruit-filled boughs of the gooseberry tree in our home in Manipur.”

Brine and dressings in Bengaluru, Karnataka

Author of the popular blog Saffron Trail, Dr Iyer’s accessible Everyday Superfoods (launched in March) has an Amla in Brine recipe that only involves the gooseberry, turmeric, salt, and a pressure cooker. While the cubed fruit can then be added to salads or ground with coconut, green chillies and yoghurt, she says the brining liquid can liven up lemonades and salad dressings. Find more details on its nutritional benefits and easy lacto fermentation in her book from Bloomsbury India, priced at ₹799.