‘Friends Reunion’ review: The One Where They Gave You The Feels Despite being schmaltzy, the long-delayed sitcom reunion is unapologetically nostalgic, and manages to recreate the magic all over again

Perhaps the best part about the Friends Reunion, is that by the end of it, you realise that there always was — and probably still is — a part of Rachel, Monica, Phoebe, Ross, Chandler and Joey, in the respective actors who played them.

Maybe it’s because we are so accustomed to watching them over the best part of three decades (the first episode aired in September 1994), but when Kudrow yells, Aniston tears up or Schwimmer shrugs during a real-time conversation, a jolt of recollection instantly takes you back to an episode where you’ve witnessed that exact expression.

Also Read: The best ‘Friends’ episodes to watch ahead of Thursday’s reunion special

And that, is important. In a time when we are wrecked by the fear and uncertainty of the pandemic, where friendships and families are broken every minute, the knowledge that some version of these iconic characters — whose storylines ended 17 years ago — still inhabits these real-life stars, is strangely comforting.

Which is perhaps, why, the best part of the special are its introductions, when the six wander one-by-one into Stage 24 on the Warner Bros. lot in Burbank, CA. There’s genuine wide-eyed joy and emotion as the now-A-listers clasp their eyes onto the meticulously-recreated sets of the apartments, hallway and Central Perk, a million memories crossing their minds, as they recall the time they were young, broke and on the cusp of defining the zeitgeist of an entire era of pop-culture and television.

The individual reunions of the six stars, 17 years after the show ended, are fascinating to watch

The individual reunions too, are fascinating to watch, each hug or handshake revealing much more than they let on. This is just the second time that all the six stars are in the same room together since the show ended, but Aniston, Cox and Kudrow reveal an easy comfort with each other, as opposed to the three guys, indicating how their off-screen friendships have progressed over time.

Part talk show (James Corden plays host here with the ‘Friends fountain’ in the backdrop), part trip down memory lane, and part celebrity-fuelled tribute, the actors conversing inside Monica and Rachel’s old apartment is interspersed with executive producers David Crane, Marta Kauffman and Kevin Bright explaining how the show was conceived (“It’s about that time in your life when your friends were your family,” was the first pitch), the casting process, and the breakthrough realisation that their sitcom had become a global sensation. Calling it first: The Rachel is going to make a comeback after this airs.

Not all these bits work entirely, carefully-rehearsed and staged as they seem, especially Corden’s questions that come off as excessively vanilla. Some of the cameos are fun, such as when Malala Yousafzai talks about staying up all night to watch reruns with her best friend, RM from BTS revealing that he learnt English from the show, or when a surprise guest turns up to perform Smelly Cat with Lisa Phoebe. Others… not so much, with the hyped celebrity fashion show trotting out classic Friends costumes turning out to be a bit of a write-off.

But when left to themselves, the friends turn on the familiar charm in seconds, that it’s hard to believe they have been away for so long. Be it participating in a trivia quiz inspired from The One With the Embryos, emotionally remembering the finale and farewells from 2004, or indulging in impromptu script-reading sessions (watch out for Schwimmer and Aniston take us back to Ross and Rachel’s first kiss), their chemistry and camaraderie absolutely hits the roof. In fact, it is so natural that it’s easy to understand why audiences felt like they were one among them: the seventh friend. Ouch, Mike/ Paul Rudd. One of the reunion’s best segments is when everyone participates in a trivia quiz inspired from ‘The One With the Embryos’ episode
| Photo Credit:
HBO Max

The funniest portions are when they laugh themselves to tears while watching unseen bloopers and behind-the-scenes footage, though Schwimmer revealing that he hated acting with Marcel the Monkey in response to a fan question is a hoot as well.

There’s also a great montage of Friends superfans in countries across the world, from Ghana to India, reminiscing on how the show helped them overcome depression or even suicidal thoughts, which despite being a tad schmaltzy, brings to mind the first time you discovered the show as a teen — or adult — and made it your comfort watch of choice.

Actors who played the likes of Janice, Richard, Gunther and more make blink-and-you-miss-it appearances, LeBlanc, in classic Joey-style, steals the scene on more than one occasion, everyone collectively agrees that Lisa Kudrow has the most infectious laugh, and finally, the revelation that two of the stars — wait for it — crushed on each other.

Predictably though, the special steers almost apologetically clear of any of the issues that have cropped up since Friends ended: the lack of any major non-white characters in its cast; sexist and homophobic jokes that appear frequently; infamous contract disputes that were resolved with then-record salaries; or Perry’s earlier interviews on how his addiction struggles influenced his presence on the show. 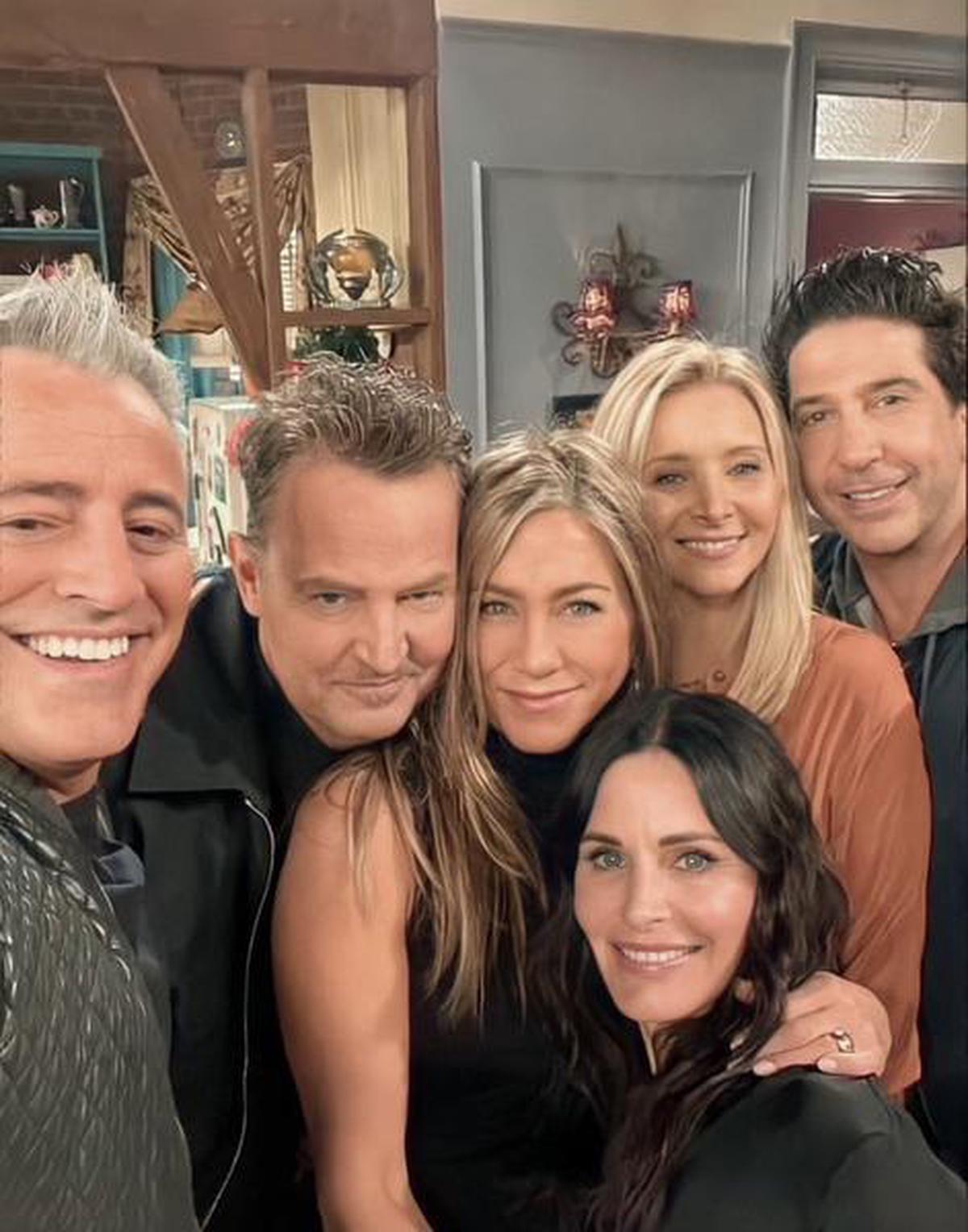 Matt LeBlanc takes a selfie from the sets of the reunion

Despite this, few fans would begrudge their success anytime soon. As Schwimmer states, nobody except the six of them will quite understand what they went through, as the lives of six 20-somethings changed overnight.

The reunion ends with the admission that a scripted reunion would be quite unlikely (“I don’t want anybody’s happy ending unraveled,” says Kudrow, looking at the creators in the audience), and several shots of Jennifer Aniston happy-crying, as The Rembrandts play in the background.

And then, just for a fleeting moment, things seem slightly better with the world as we know it today. Onto the reruns already.