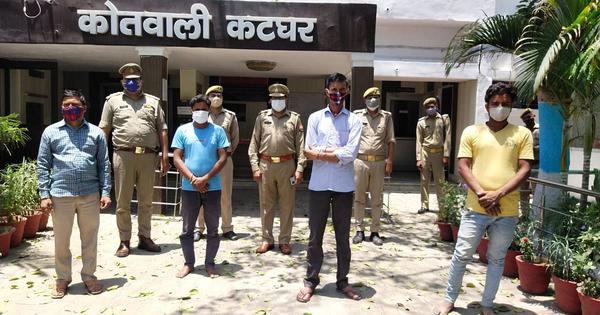 A video has emerged on social media of a man being assaulted by a group in the Katghar police station in Uttar Pradesh’s Moradabad district.

The victim, Mohammed Shakir, was assaulted by a person, identified as Manoj Thakur, and others on Sunday afternoon. Shakir works in the business of transporting and selling meat, according to NDTV.

In a written complaint, Shakir’s brother said that he was harassed and then beaten up for carrying 50 kilograms of buffalo meat on his scooter. The complaint also mentions that the vigilantes demanded Rs 50,000 from Shakir and then assaulted him.

Apart from registering a first information report against six persons named by the victim’s brother, the police have also filed a case against Shakir. There are varying reports on the charges against him. Station House Officer at Katghar, where the case was filed, said Shakir had been charged for not wearing a face mask, The Quint reported.

However, according to NDTV, the charges also include those related to “causing mischief by killing an animal”.

A video tweeted by an independent journalist on Sunday showed Thakur assaulting Shakir as others surround him.

In another video of the incident, tweeted by The Quint, Thakur and other men can be seen abusing Shakir and interrogating about his personal details. They also ask him to produce a bill for the meat he was carrying.

On Monday morning, the Moradabad Police tweeted saying that four people accused of assaulting Shakir had been arrested. However, two others, including Thakur, were still on the run.

The FIR also noted charges under the Indian Penal Code, including sections 147 (rioting), 148 (armed with a deadly weapon), 149 (unlawful assembly), 389 (extortion), 386 (extortion by putting a person in fear of death), 323 (voluntarily causing hurt) and 506 (criminal intimidation), reported The Quint.

“We got a video of a meat seller being beaten up and we have filed a case,” a senior superintendent of Moradabad Police, said in a video statement. “There are five to six accused who have been named. We are carrying out searches and will arrest them soon.”

The police officer, however, did not mention any of the charges against Shakir.

There was a dispute over Thakur’s affiliation too, as he claimed to be the vice president of cow vigilante group, the Bharatiya Gauraksha Vahini.

“If the government gives me a force, I will catch the butchers who are slaughtering cows every day,” Thakur said, while speaking to The Quint.

However, Rakesh Singh Parihar, the National President of the Bharatiya Gauraksha Vahini told the news website that Thakur was expelled six months ago after allegations of extortion emerged against him.

“There were several allegations against him of taking money from people,” Parihar said. “Our local [Rashtriya Swayamsevak] Sangh representatives in Moradabad also told us about this. It seems like now we will have to put out a separate press release saying he is not in the party to avoid further confusion. We keep telling him but he does not listen.”

The Opposition has criticised Uttar Pradesh Chief Minister Adityanath for launching a crackdown on cow slaughter and small-scale beef trade – run largely by Muslims and Dalits in the state.

In June 2020, the Uttar Pradesh Cabinet had approved an ordinance increasing the penalty for cow slaughter to up to 10 years imprisonment and a fine of up to Rs 5 lakh.

In April, a report by The Indian Express showed that one-third of the 120 cases in which authorities in Uttar Pradesh invoked the National Security Act between January 2018 and December 2020, were against Muslims who were accused of cow slaughter.