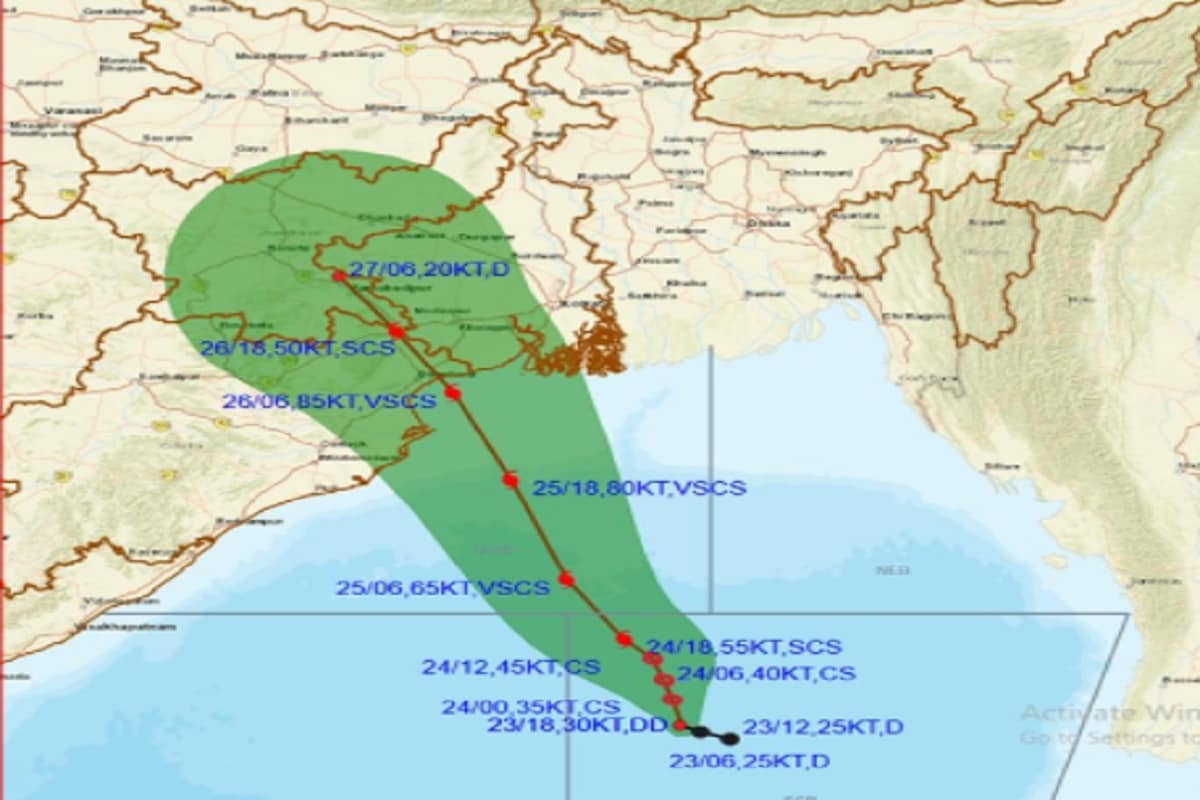 Cyclone Yaas Live Updates: The West Bengal government has begun evacuating people from low-lying areas of South 24 Parganas and East Midnapore districts after the India Meteorological Department predicted that Cyclone ‘Yaas’, which may turn out to be “very severe cyclonic storm”, will make landfall somewhere between Paradwip in Odisha and Sagar in South 24 Parganas on May 26 evening at a speed ranging between 155 km/hr and 165 km/hr.

According to the Regional Meteorological Centre in Alipore, the cyclone Yaas is 670 kms away from the coast of Digha in West Bengal and is expected to turn into a severe cyclonic storm by Monday night. The India Meteorological Department on Sunday said that Cyclone Yaas will lash Odisha and West Bengal with “highly damaging wind speed” and can be compared to the damage with the last Cyclone, Amphan.

Here are the live updates for Cyclone Yaas:

– The IMD on Monday tweeted the course of Cyclone Yaas and said, “Depression over Eastcentral Bay of Bengal intensified into a Deep Depression and about 600 km north-northwest of Port Blair. To intensify into a Cyclonic Storm by 24th May morning and further into a Very Severe Cyclonic Storm during the subsequent 24 hours.”

Depression over Eastcentral Bay of Bengal intensified into a Deep Depression and about 600 km north-northwest of Port Blair. To intensify into a Cyclonic Storm by 24th May morning and further into a Very Severe Cyclonic Storm during the subsequent 24 hours. pic.twitter.com/khnZP3n67v— India Meteorological Department (@Indiametdept) May 23, 2021

– Chief Minister Mamata Banerjee had said that she had “extensively reviewed the disaster management preparedness with regards to the impending Yaas cyclone with all senior officers of relevant Central and state agencies along with DMs & SPs.

– The NDRF has formed 46 teams equipped with boats, tree-cutters, telecom equipment etc in four coastal states /UT — West Bengal, Odisha, Andhra Pradesh, and — for relief and rescue operation. In addition, 13 teams are being airlifted for deployment on Sunday.

– The Railways cancelled two trains plying between Ranchi and Howrah and various trains running through Jharkhand, too, remain suspended between May 25 and May 26 as a preventive measure against Cyclone Yaas.

– The India Meteorological Department (IMD) said on Sunday that the cyclone is likely to make landfall on May 26 evening between Paradip in Odisha and Sagar islands in West Bengal after intensifying into a very severe cyclonic storm’ with wind speed ranging from 155kmph to 165 kmph, gusting to 185 kmph. It will start bringing heavy rain in coastal areas from Tuesday.

– In West Bengal, besides taking out residents from their homes, the state government is making every effort to ensure that there is not a single tourist left in Digha and Mandarmani – the two main tourist spots near the sea in East Midnapore district.

– State administration has stored huge amounts of baby food, water pouches, tarpaulins and candles in all the cyclone centres and safe homes. “For Covid patients, we have made additional arrangements for generators in all the hospitals and safe homes. The doctors and the paramedical staff have been asked to stay in the hospitals 24×7 so that they can respond to any kind of emergency. Army has been asked to stay on standby,” a state official said.