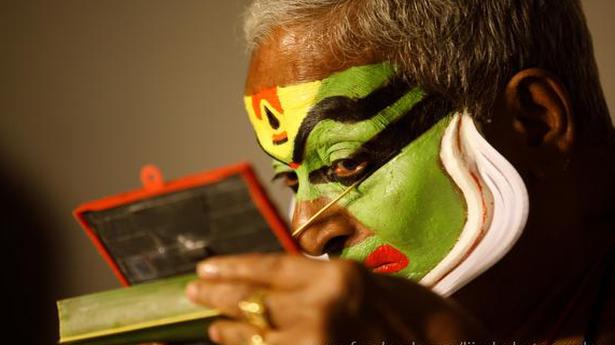 At 84, he continues to be Kathakali’s eternal hero, whose unique technique has redefined the art form

Dr. Kalamandalam Gopi, who turns 84 this month, is often described as the ‘Evergreen Hero’. In the world of Kathakali there have been several others with long careers, but why has Gopi Asaan, as he is reverentially called, become the poster boy for the dance form? What makes him so special?

The answer may be found in a couple of incidents from his life. When Gopi Asaan returned to the stage in 1992 after a year-long absence and a major surgery, he chose for his comeback at Guruvayur the toughest role perhaps in Kathakali, ignoring the advice of his friends and gurus. Again, 25 years later, during his 80th birthday celebrations at Thrissur, he chose to perform the same physically demanding role — Dharmaputra in Kirmeeravadham — that involves an extremely slow tempo sequence or padinja padam and requires his continuous presence on stage for over three hours.

For Gopi Asaan, there are no half measures, and no shortcuts. His guru, the late Padmanabhan Nair, had once remarked that while teaching an intricate rhythmic movement or kalasam, Gopi would do it over and over again till it got ingrained in his psyche.

Gopi Asaan is also naturally gifted with the physical features ideal for a Kathakali artiste, and endowed with a face where all shades of emotions appear with ease. But what has sustained him is his meticulousness in executing kalasams and his use of the entire body to express. Even while he was more popular as the romantic hero, playing Nala, Kacha, Karna and Rugmangatha, he didn’t shy away from doing the demanding lead roles in the four major stories, Kottayam Kathakal, known for their strict adherence to stylised structure.

Noted Kathakali connoisseur and arts activist K.B. Rajanand calls Gopi Asaan a self-made artiste. “Apart from his sincere efforts to internalise the language of Kathakali, he paid close attention to make-up, and after much experimentation arrived on the scheme that complemented and accentuated his high cheekbones and the shape of his lips, nose and eyes.”

Rajanand also credits him with creating an idiom of his own. “The changes he brought about — the precision and speed of his mudras, the variations in rhythm and tempo that he employs for the mudras, the way he uses his eyes to inject force into his gestures, certain unconventional postures that he strikes on the stage — all make him unique,” says Rajanand.

For fellow Kathakali artiste Ettumanoor P. Kannan, Gopi Asaan’s gifts go deeper. He says that the sum total of Asaan’s performance, his angika and aharya, all can be termed satwika prakasam or a manifestation of satwika. But satwika in this context must not be confused with facial expression, he cautions. “Satwika here has a deeper meaning — it is the inner energy, the source of inspiration and the font of emotions, thoughts and imaginations that power an artiste’s mind, be it in painting or the performing arts.”

Vadakke Manalath Govindan was born in 1937 in the village of Kothachira in Palakkad district. When Gopi was in fourth standard, the local landlord got him to learn the folk art, Ottanthullal, his first step into the world of performing arts. When the Ottanthullal school closed down, Gopi was called by the patron of a nearby village to a Kathakali kalari run by Thekkinkattil Ravunni Nair. When that too ended and the future looked bleak, the chance to join Kerala Kalamandalam presented itself.

It is said that the poet Vallathol, who was instrumental in setting up Kalamandalam, took one look at Gopi and enrolled him in the institute in 1951 at the age of 14, even without the mandatory facial make-up test. That moment turned out to be a milestone in 20th century Kathakali, when Gopi met the two great gurus — Kalamandalam Ramankutty Nair and Kalamandalam Padmanabhan Nair — who moulded him. Gopi says the seven-year course he completed in 1957 was as good as a 14-year course considering how rigorous and punishing it was. He was appointed a teacher there in 1958 and went on to become the principal in 1990. He retired from Kalamandalam two years later.

No appreciation of Gopi Asaan will be complete without mentioning his contributions as a guru. Perhaps his most profound contribution came after retirement, when he returned to his alma mater as professor emeritus. The fact that he has trained several generations of artistes will go a long way in preserving a tradition of Kathakali that has come to be known as the Kalamandalam kalari.

His book, the 400-page Nalacharita Prabhavam, an actor’s manual, was published in 2017. Gopi Asaan says he didn’t set out to write a book, but it evolved when he was asked to train post-graduate students in Nalacharitam, traditionally not taught in the kalari. He also recalls how his guru Padmanabhan Nair, who wrote the stage manuals for the four Kottayam plays, exhorted him to compose one for Nalacharitam. “My voluminous notes to my students and my consultations with litterateurs on the various meanings and sub-texts of Nalacharitam ultimately took the form of the book.”

Gopi Asaan lives at Mundur, not far from his place of birth, with his wife, two sons and their families. A seven-decade career is now paused by the pandemic. As he turns 84, what does he feel when looking back? “I am filled with a sense of wonder. Coming from a small village I have traversed the world stage. There have been two constant sources of strength in my life — Guruvayoorappan and my wife Chandrika.”

It is indisputable that Asaan always had a very clear idea about the philosophy of beauty and always aimed for perfection. To quote Rajanand, “Gopi Asaan’s idiom o over time became the accepted stage language of Kathakali. He thereby shaped and defined the aesthetics of an entire generation and thus became part of the art form’s history.”