Covid-19 positivity rate down to 10 pc in Telangana: Vemula 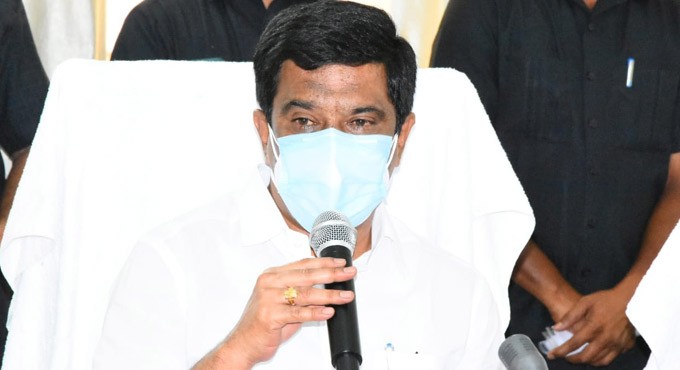 The decision to conduct a health survey was taken by Chief Minister K Chandrashekhar Rao, and it has become a role model for other States. Even the Central government was requesting other States to conduct similar surveys, he said while interacting with media persons at Kamareddy District Collector’s office.

The Minister, who reviewed the Covid situation, said those who are affected with black fungus should either be referred to the Gandhi hospital or ENT hospital in King Koti. Works pertaining to providing additional 100 beds in Kamareddy and 70 oxygen beds in Banswada area hospital would be completed by Saturday.

He said a request was made to the District Collector to write a letter to the State government to set up 10 oxygen beds each at primary health centres in Domakonda, Madnoor, Yellareddy and Bichkunda. Instructions were also issued to the Health Department officials to provide five ventilators in the district hospital.

The Minister advised people not to approach private hospitals as more amenities were provided at the government hospital and appreciated the hard work of the doctors and para-medical staff along with ASHA and Auxiliary Nurse Midwife (ANMs) workers during the pandemic.

MP BB Patil gave 30 oxygen concentrators each costing Rs 50,000 was given as a gift to the district. Prashanth Reddy said instructions were also issued to the district Collector to establish an isolation centre at the mandal-level and with the cooperation of officials and elected representatives, the administration overcame the shortage of Remdevisir injections and medicines.

He asked people not to step out of their residence and wear double masks and sanitize their hands regularly.