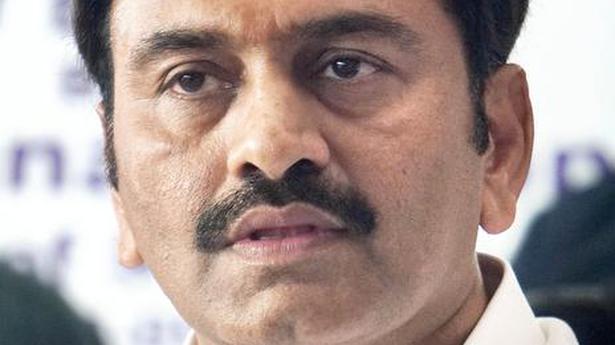 Medical examination should be conducted in presence of judicial officer nominated by Telangana High Court Chief Justice, it says.

The Supreme Court on Monday ordered YSR Congress MP Kanumuri Raghu Ramakrishna Raju, who is in the Andhra police custody for sedition, to be immediately taken to the Army hospital in Secunderabad for medical examination.

A Vacation Bench of Justices Vineet Saran and B.R. Gavai expressed concern about the health of Mr. Raju. It directed that Mr. Raju be admitted in the Army Hospital for medical care until further orders.

The Bench referred to the magistrate’s remarks that Mr. Raju required a medical examination. The magistrate had noted the contention raised by Mr. Raju’s counsel that his client, a sitting MP, was subject to “third degree” methods by the police and he could hardly walk. Besides, Mr. Raju had undergone a by-pass surgery in December last year. The State High Court too had directed a medical examination.

The examination should be videographed and the tape should be handed over to the Registrar General of the Telangana High Court, who would in turn pass it on to the Supreme Court.

The Bench said the time Mr. Raju spent in the Army hospital should be treated as part of his judicial custody. Mr. Raju would take care of his own hospital expenses.

Senior advocate Dushyant Dave, for Andhra, had agreed to Mr. Raju being medically examined at the Army hospital, but the lawyer had vehemently objected to admitting the MP in the hospital. Mr. Dave said the allegations against Mr. Raju were “very serious”.

Solicitor General Tushar Mehta had not raised any objection to Mr. Rohatgi’s suggestion to even bring Mr. Raju to AIIMS, New Delhi, for medical care. But the Bench opted for the Army hospital.

During the virtual court hearing, senior advocate Mukul Rohatgi, for Mr. Raju, said governments add the charge of sedition as a matter of course to prevent the accused from getting bail.

The Narsapuram MP, also represented by senior advocate Adinarayana Rao and advocate Tatini Basu, alleged that the registration of the case against him was a “vindictive action” by his own party’s government in Andhra Pradesh led by Chief Minister Jagan Mohan Reddy. In his petition, the MP said his outspoken comments on various digital platforms against the State government had irked the ruling dispensation.

Mr. Raju urged the Supreme Court to protect his fundamental right to speech and expression. Free speech should not be shackled by imposing penal provisions on the speaker, he argued.

The Bench scheduled the arguments on bail on May 21. The Andhra government has to file its response to Mr. Raju’s bail appeal by May 19.

A separate writ petition was filed by M/s Shreya Broadcasting Pvt Ltd, which runs TV5 channel, against the Andhra government.

The company, represented by advocate Vipin Nair, has urged the Supreme Court to stay further probe and protect the management and employees from any coercive action by the State.

It said the channel neutrally covers political issues in the States and has hosted influential public figures from all ends of the political spectrum.

“According to the FIR, the offending speeches of Mr. Raju were made across a number of media outlets, including that of the petitioner. The only allegation in the FIR against TV5 is that it allotted ‘premediated’ and ‘organised’ slots to Mr. Raju, which according to the impugned FIR evinces a meeting of minds amongst the accused persons,” the company said in a writ petition.

It said the “FIR miserably fails to establish any nexus of TV5 to any of the alleged offences”.