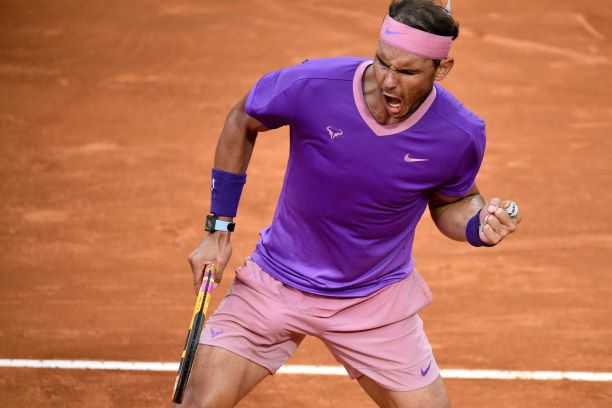 The victory also earned Nadal a 36th ATP Masters 1000 crown, equalling Djokovic’s record since the series was established in 1990.

Rome: Rafael Nadal overcame a mid-match surge from Novak Djokovic and raised his level in the deciding set to triumph 7-5, 1-6, 6-3 on Sunday and lift his 10th trophy at the Internazionali BNL d’Italia.

In the 57th meeting of the ATP Tour’s most prolific rivalry, top seed Djokovic was facing second seed Nadal for the ninth time at the Foro Italico (Nadal leads 6-3). Nadal improved to 4-2 in Rome finals against Djokovic with the victory, and brought his ATP head-to-head record against the Serbian to 28-29 overall.

“It’s a very satisfying [victory],” Nadal said in his post-match press conference. “It’s amazing [to] have the trophy with me again one more time here in Rome. The 10th, I really wanted this 10th here in Rome. It was one of the first important titles that I won in my career.

“After achieving 10 in Roland Garros, 10 in Monte-Carlo, 10 in Barcelona, I really wanted this one.”

The victory also earned Nadal a 36th ATP Masters 1000 crown, equalling Djokovic’s record since the series was established in 1990.

With his 88th tour-level title, Nadal surged into the sixth position in the FedEx ATP Race to Turin. He sits just 10 points behind Daniil Medvedev and 30 points behind Alexander Zverev, who holds the fourth position. Djokovic overtook Andrey Rublev to sit in second position, turning up the heat on Race leader Stefanos Tsitsipas. Only 190 points separate Djokovic and Rolex Monte-Carlo Masters champion Tsitsipas.

Djokovic spent nearly five hours on court (4hrs, 56 mins) on Saturday after winning his rain-delayed quarter-final against Stefanos Tsitsipas and a semi-final epic against Lorenzo Sonego to reach the final, while Nadal needed an hour and a half to take down Reilly Opelka.

“That’s a huge improvement for me, (a) very important shot. Especially on clay it’s gives me confidence.”