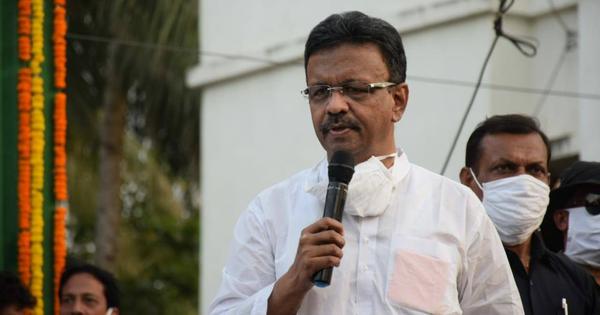 All four political leaders were granted bail by a special Central Bureau of Investigation court in Kolkata on Monday evening, ANI reported. They were produced in a virtual hearing of the court after the CBI sought their custody.

Following his arrest, Hakim alleged that he was arrested in the case without prior notice, News18 reported. “I will challenge my arrest in court,” he added.

Shortly after the arrests, West Bengal Chief Minister Mamata Banerjee and other Trinamool Congress leaders reached the CBI’s office, ANI reported. “The way they have been arrested without due procedure, the CBI will have to arrest me also,” Banerjee said, according to NDTV.

Trinamool Congress MP Kalyan Banerjee said the party will move the Supreme Court against the arrests, which he claimed were done with a political agenda.

“You know Supreme Court made a judgement during Covid-19 times that police cannot unnecessarily detain, arrest any person,” Kalyan Banerjee told ANI. “Despite that, the CBI and the police have arrested our leaders.”

CBI officials said they will file the chargesheet on Monday against five accused, including the three Trinamool Congress leaders arrested earlier in the day, reported PTI.

The bribery case involves videos published by Narada News, in which several Trinamool Congress leaders were allegedly seen accepting cash in return for favours. The videos, shot by the website’s Chief Executive Mathew Samuel, were released ahead of the state Assembly elections in 2016.

West Bengal Assembly Speaker Biman Banerjee, however, called the arrests illegal, reported PTI. “I have not received any letter from the CBI nor has anybody sought permission from me as per the protocol,” the Speaker said.

Biman Banerjee said that he did not know why the CBI officials went to the West Bengal governor to seek his sanction as the Speaker’s chair was not vacant at the time. “I was very much in office,” he said.

Trinamool Congress spokesperson Kunal Ghosh asked why BJP vice-president Mukul Roy was not being arrested. “He was also seen in the Narada sting operation video saying that the money be given to an IPS officer,” Ghosh said, according to the Hindustan Times. “The BJP has become vindictive just because they can’t accept their defeat in the Assembly polls.”

The CBI has sought to prosecute MPs Sougata Roy, Kakoli Ghosh Dastidar, Prasun Banerjee and Aparupa Poddar also But Lok Sabha Speaker Om Birla has not granted the permission yet.

A day before the new West Bengal Cabinet member’s swearing-in ceremony on May 10, Governor Jagdeep Dhankhar had approved a CBI inquiry against Hakim, Mukherjee, Mitra and Chatterjee.