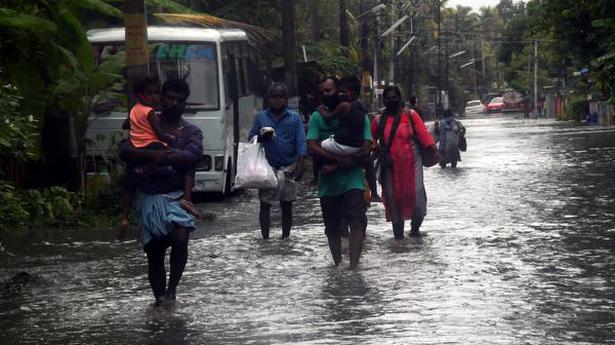 A dozen houses are fully or partially flooded in Kandakkadavu, more than a score of houses are under threat in Maruvakkad and Bazaar areas, where seawall has collapsed

The coastal village of Chellanam continues to reel under flooding as high waves continued to thrash the coast in the midst of heavy rains that started early on Friday.

Nearly 250 people from over sixty families have been shifted to four relief camps in the coastal village of Chellanam as flooding felled houses and compound walls, and hampered rescue operations as the Fort Kochi-Cherthala road went under water.

Figures from the district administration said that the first camp to be opened, St. Xavier’s Public School, Kandakkadavu, had 148 people from 45 families while the St. Mary’s High School camp had provided shelter to 39 people from 14 families in Chellanam. At the same time, two camps – Chinamaya Vidyalaya (quarantine centre) and SDPY Central School, Kalathara, Palluruthy had sheltered 42 people from 12 families. The people have been shifted to these camps from Kannamali area of the Chellanam panchayat.

The coastal village continued to reel under heavy rains, high waves and flooding on Saturday though residents said there appeared a little easing of the situation Saturday morning. But the high tides invaded the shores much before the expected time of 2 p.m. said Father Dani Anthony, a Catholic priest who runs a charity institution in the village.

A dozen houses are fully or partially flooded in Kandakkadavu; more than a score of houses are under threat in Maruvakkad and Bazaar areas, where seawall has collapsed, said Joseph Arakkal of Samyukta Samara Samity, which has been demanding repair of seawalls and groynes and erection of new segments to prevent flooding and protecting the coast.

K. J. Maxy, MLA, said that the situation was grim. But he had visited most of the area Saturday afternoon and made sure that food and drinking water reached the camps as well as those homes, which needed them. He said that rescue operations were being coordinated by the district authority and he was fully aware of the actions being taken to lessen the hardship of the people.

Asin George from Kandakkadavu said that his house was located on a higher plain but waters had reached the courtyard even as those residing at the lower level had taken refuge on their terraces and roofs along with old people. But the fear of COVID 19 was keeping people from going to the rescue camps, he added.

The flooding is so severe that people said only fire engines could move on the flooded road even as several people sought shelter on their terraces and roofs even with old people in their groups.

P. A. Charles, a resident of South Chellanam said that Maruvakkad and Chalakkadavu, and areas north of these places were the worst affected. He said that the area where he lived, Malikapparambu, close to the Chellanam mini fishing harbour, was not experiencing flooding directly from the sea but the rain water drains and canals were flooded and water was flowing up to the residential areas along the canal and stormwater drains.

The fresh bout of flooding claimed its first victim Friday evening when V.V. Antony Valiyaparambil fell into the flood waters and was carried away while trying to put up barriers as waters rushed into his residential premises.