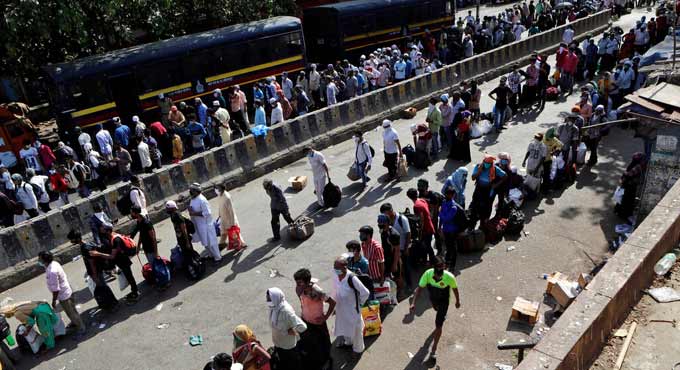 Mumbai: Japanese brokerage Nomura on Tuesday cut its GDP growth estimate for the current 2021-22 fiscal to 10.8 per cent from the earlier 12.6 per cent, blaming the impact of the second wave-induced lockdowns.

It said the activity levels have dropped further to 64.5 per cent of the pre-pandemic levels in the week to May 9 as per a proprietary index, after a further 5 percentage points drop in the week. The activity levels, at present, are at par with those seen in June 2020.

The country has reported over 4 lakh new infections and 4,000 deaths a day during the ongoing second wave of the COVID-19 infections, leading over 20 states to impose lockdowns or lockdown-like restrictions as a desperate measure to restrict the spread of the virus.

Nomura said its cut in the GDP growth estimate is reflective of a larger lockdown-led loss of sequential momentum in the June quarter. “We expect a localised hit in Q2 (April-June period) and believe that medium-term tailwinds (like vaccine pivot, global recovery, easy financial conditions) remain intact,” it said.

In the note, the brokerage said the fall in activity continues to be driven by a sharp fall in mobility, pointing that Google’s workplace and retail and recreation mobility indices fell by 10 per cent. Power demand also fell by 4.1 per cent week-on-week while the labour participation rate inched higher to 41.3 per cent vs 38.9 per cent last week.

The sharp drop in Nomura India Business Resumption Index (NIBRI) suggests that the rolling state-wide lockdowns are hurting sequential growth. “We would, however, caution that the drop in mobility exaggerates the hit to economic activity. International experiences suggest the correlation between mobility and GDP growth is much weaker during the second wave, due to more targetted restrictions and more pandemic-adept consumers and businesses,” it said.

India might be heading towards a “serious livelihood crisis” as the situation seems to be worse this time for the working class amid the Covid crisis and local restrictions by states already add up to something close to a nationwide lockdown, according to noted economist Jean Dreze.
In an interview to PTI, he also said the government’s target to make India a $5 trillion economy by 2024-25 was never a “feasible target” and was just to pander to the “super-power ambitions” of the Indian elite.

About the impact of the second wave of Covid on the Indian economy, the economist said the situation today is not very different from what it was around this time last year as far as working people are concerned.

Further, the economist said the fear of infection is more widespread and that will make it hard to revive economic activity. “Despite mass vaccination, there is a serious possibility that intermittent crises will continue for a long time, perhaps years.

“Compared with last year, many people have depleted savings and larger debts. Those who borrowed their way through last year’s crisis may not be able to do it again this time,” he observed. Dreze also pointed out that last year there was a relief package and today relief measures are not even being discussed.

“On top of all this, local lockdowns may give way to a national lockdown relatively soon. In fact, they already add up to something close to a country-wide lockdown. On how the government could have missed seeing the second COVID-19 wave coming, Dreze said the Indian government has been in denial all along.

“Remember, the government refused to admit about any ‘community transmission’ of Covid for a long time, even as recorded cases were counted in millions. “When an early analysis of official data exposed the collapse of health services, the government retracted the data,” he said.