Meat fry with banana fritters, or with sweet neyyappam? In Kerala’s street food hubs and cafes, age-old food pairings are being replaced with quirky combinations that demand a leap of faith

Nair’s Puttukada (puttu shop) has a very direct title. But if you go in expecting the usual, cylindrical rice cake puttu to be served along with a plate of kadala (black chick peas) curry, pappadom and a banana, as is the unquestionable tradition in Kerala, you would be surprised. At Nair’s, the puttu is served along with dry parippu (lentil), a strange bedfellow. A spicy duck-egg roast is also part of the package. Mohanan P Nair, the owner of the 56-year-old tea shop in Chathanad, about eight kilometres from North Paravur in Ernakulam, says he thought up the combo and started serving it over 17 years ago. “I wasn’t sure. But it clicked,” he says, over phone from his home. Now, he has people from faraway places seeking out the dish. The tea shop that usually opens at 4.30 pm is now closed owing to the COVID-19 situation.

We are not entirely new to bizarre food pairings. 2020 saw a few of those go viral on social media. Blame it on COVID-19, for nothing else can logically explain chocolate Manchurian, Nutella biryani or chicken tikka chai. Dishes such as the one at Nair’s, however, are unusual yet extremely palatable. “It seems very peculiar at first. But the combination grows on you,” says businessman and vlogger Balram Menon, who used to frequent Nair’s shop. “The dry lentil brings in the perfect balance between the spice in the duck egg roast and the puttu,” he adds. 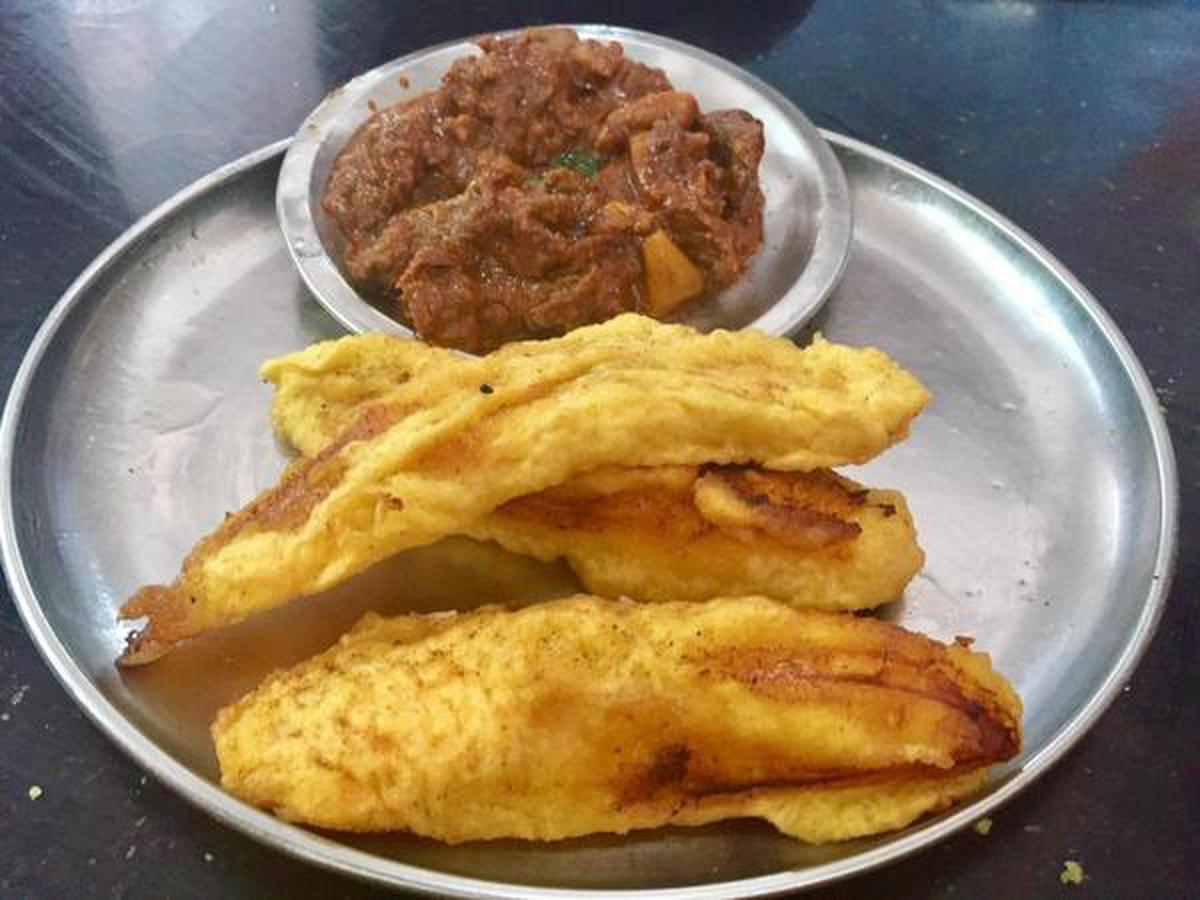 One of the oldest among Kerala’s odd couplings is the pazhampori (banana fritters) and beef. Sree Muruga Cafe in Tripunithura, Kochi, popularised this rather wacky combination, which is a popular snack today. Started in 1943, the tea shop has always sold pazhampori and beef roast, but it became famous much later, says Sathyan K B, the owner of Sree Muruga. “Around 1994, when Malayalam actor Jayasurya was shooting for a television show, he and the crew happened to see someone relishing pazhampori with beef. Word spread quickly and the media made the dish popular,” he adds. The combo is one the best selling at Sree Muruga today.

TV personality and chef Raj Kalesh says the pairing owes its origin to North Indian lorry drivers, who ordered the sweet pazhampori to balance the spice of the famed Kerala beef roast. “Kerala was always known for its beef roast and it gradually became a thing to order pazhampori with it,” he says. The fritters too are crispy, fried in rice batter instead of maida, adds Kalesh.

Any fried snack works well with any non-vegetarian gravy, says Ashvin George, a traveller and food enthusiast. Salwa, an eatery in Thoppumpady, Kochi, usually does brisk business around 5 am based on just this principle. Its best-selling dish is savalavada (onion pakora) served with squid roast. “It is just savalavada usually, but once in a while, there is pazhampori as well. Every morning, they fry up these delicious snacks by 2 am or 3 am for the men who go out to sea. The savalavada is often had with chicken or beef roast as well,” adds Ashvin.

While the rest of us drool over porotta-beef fry, Ashvin also suggests you have the beef fry with neyyappam (a traditional sweet made of jaggery and rice flour). He tasted this combo at a small hotel in Wayanad, whose owner (whom he refers to as Majeedka), grinds the rice for the neyyappam in the afternoon and makes them in the evening. The beef, prepped as early as 10 am, is cooked slowly through the day, and makes for a soul satisfying match with neyyappam.

These are not conventional combinations. “It is up to each person, really. Whatever floats your boat,” adds Ashvin, whose personal idea of an ultimate breakfast is poori with fried eggs. 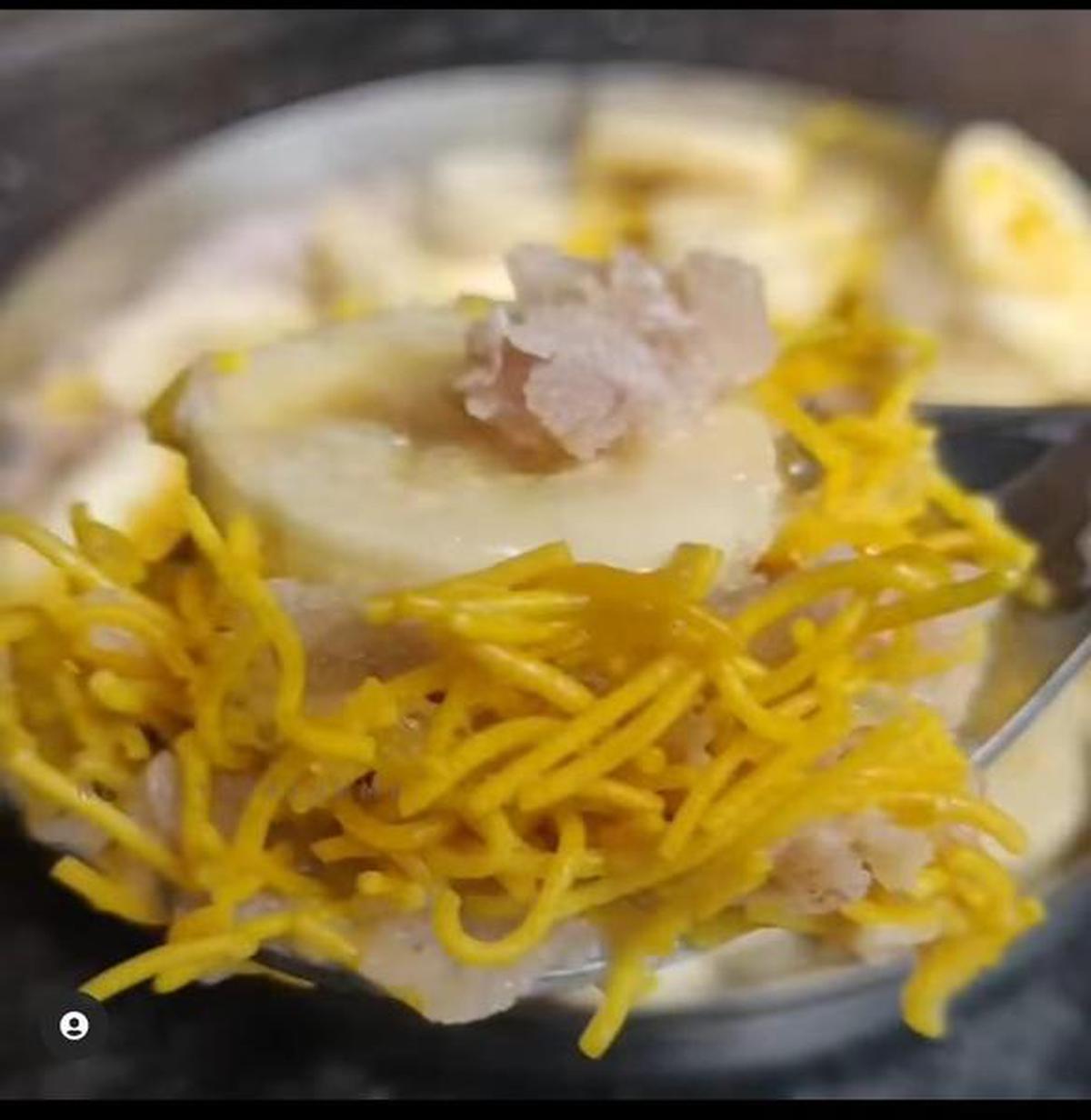 Satheeshan PV’s tea stall at Kannapuram in Kannur does not have a name. But everyone in the locality and across Kerala knows his shop for its aval isthiri (which loosely translates to ironed flattened rice). Satheeshan is not sure how the dish got its name, but he has been serving it since the 1970s. His father came up with the dish, which is something like a Malayali bhel puri — made of aval, sugar, Robusta banana and sev (omapodi).

“The magic is in the mixing of ingredients,” says Satheeshan, whose has seen his father make it back in the day. “It is a hot favourite here; simple, healthy and filling,” he adds. People from across Kerala have travelled to Kannur to try the dish, says Satheeshan. “If you examine it, it is rather simple. But I am not sure what inspired my father to come up with such an unusual dish,” adds Satheeshan, who claims he has not made any change to the dish.

It is going to be a while before we can eat out again, so but if you are bored of your rice with sambhar, feel free to reach for the cheese in the fridge.