Himanta Biswa Sarma sworn in as Chief Minister of Assam 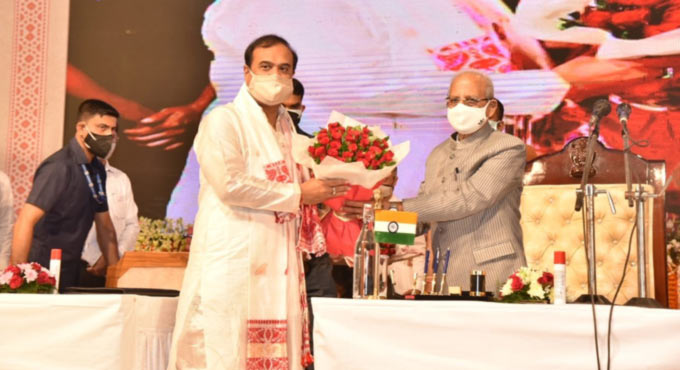 Himanta Biswa selected for the role after a crucial meeting was chaired in Delhi by BJP chief JP Nadda on Sunday.

Sarma, who was the charioteer of Bharatiya Janta Party’s stride in the Northeast was administered the oath in presence of state Governor Jagdish Mukhi, the BJP national President JP Nadda and other leaders.

Himanta Biswa selected for the role after a crucial meeting was chaired in Delhi by BJP chief JP Nadda on Sunday.

The BJP has stormed back to power in the crucial Northeastern state retaining its hold on the government.

Known to have played a pivotal role in the BJP’s growing footprint in the Northeast, Sarma left the Congress in 2015 despite being close to Chief Minister Tarun Gogoi as he felt sidelined.

The minister’s popularity has been key in the National Democratic Alliance’s victory in the Assembly polls in Assam with the alliance returning to power overcoming the stiff challenge posed by the Congress-led alliance He was a key campaigner of the party and strongly and strategically articulated its position on various issues in the state which has a diverse population with sometimes competing interests.

On being announced the Chief Minister of the state Sarma took to Twitter to express his gratitude to the people of the state.

“With fragrance of Assam in my heart & love of my wonderful people in my veins, I offer my deepest gratitude to you all. I would not have been what I am had it not been for your pious faith in me. On this Day, I vow to work with & for each one of you with greater passion Assam,” he tweeted.

In another tweet, he thanked Prime Minister Narendra Modi saying, “This is the biggest day in my life, and I so fondly cherish your generous affection. I assure you we shall leave no stone unturned to carry forward your vision of taking Assam, & NE to greater heights.”