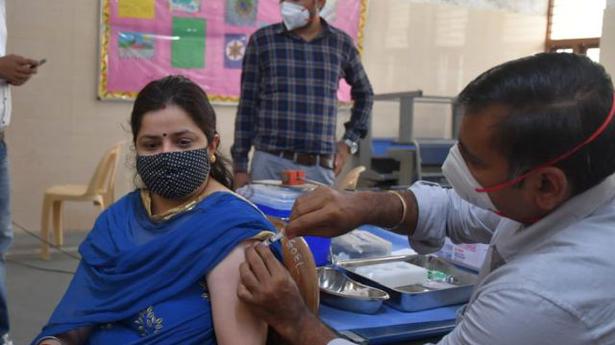 Experts have warned that recurring waves of coronavirus infections are inevitable if existing practices such as expanding India’s vaccination drive and following COVID protocol are not adhered to.

Unlike in January and February when the limited vaccine rollout was yet to accelerate, there is currently a shortage in vaccine supply, with less than 2 million doses being administered a day, and supplies of both Covishield and Covaxin unlikely to significantly pick up before July.

The Aluva East police have registered a case of cheating against a private hospital following complaints about alleged fleecing of Covid-19 patients.The case was registered invoking IPC 420 (cheating and dishonestly inducing delivery of property) against Anwar hospital near Aluva private bus stand.

“The case was registered following multiple complaints about exorbitant bills issued by the hospital, including for PPE (Personal Protective Equipment) kits. We are probing the matter and are about to collect the statement of the hospital management. We have asked the sectoral magistrate and Tehsildar to look into the matter and a report will also be submitted to the district collector in his capacity as chairman of the District Disaster Management Authority,” said P.S. Rajesh, Station House Officer, Aluva East.

India is the fastest country globally to administer 17 crore COVID-19 vaccine doses, the Union Health Ministry said on Monday, May 10, 2021.  China took 119 days while the United States took 115 days for reaching the same landmark. The vaccination drive in India was rolled out on January 16 with healthcare workers getting inoculated and vaccination of frontline workers started from February 2. Subsequently, it was opened for different age groups.

The cumulative number of COVID-19 vaccine doses administered in the country has crossed the landmark of 17 crore.

Maharashtra, Rajasthan, Gujarat, Uttar Pradesh, West Bengal, Karnataka, Madhya Pradesh, Kerala, Bihar and Andhra Pradesh account for 66.79 per cent of the cumulative doses given so far in the country.

The ministry said 2,46,269 beneficiaries of the age group 18-44 years received their first dose of COVID vaccine in a span of 24 hours and cumulatively 20,31,854 across 30 states and UTs so far.  More than 6.8 lakh vaccination doses were administered in a span of 24 hours.

Maharashtra, Karnataka and Delhi are among 10 states that account for 73.91 per cent of the  3,66,161 new COVID-19 cases registered in a day, the Union Health Ministry said on Monday.

Kerala, Tamil Nadu, Uttar Pradesh, Andhra Pradesh, West Bengal, Rajasthan and Haryana are the other states in the list of 10.

Maharashtra has reported the highest daily new cases at 48,401. It is followed by Karnataka with 47,930 while Kerala reported 35,801 new cases.

The city police on Monday, May 10, 2021, took to the streets to enforce a complete lockdown in the city after 10:00 am when the window for essential services ended. Police have put up barricades across the city, eveven in busy bylanes to block people. Police Commissioner, Kamal Pant and Chief Civic Commissioner Gaurav Gupta monitored the enforcement of lockdown in the city.

However, despite warning, police  found hundreds of motorists moving without precautions. Police resorted to caning, seized vehicles and in some cases motorists and autorickshaw drivers were made to do sit ups as punishment. Despite these, motorists continue to venture citing lame excuses, a police officer said.

Mr. Gupta said civic officials are also aiding the police on the ground closing down all establishments that are not meant to be open. “Anybody who violates lockdown norms will be dealt with strictly,” he said. — Aditya Bharadwaj

Policemen erect barrigades to enforce the complete lockdown in Vellore on Monday, May 10, 2021.

More than one crore COVID vaccine doses (1,04,30,063) are still available with the States/UTs to be administered, said the Union Health Ministry in a release issued on Monday.

It added that States with negative balance are showing more consumption (including wastage) than vaccine supplied as they have not reconciled the vaccine they have supplied to Armed Forces.

The Ministry said that more than  9 lakh (9,24,910) vaccine doses will be received in addition by the States/UTs within the next 3 days.

Central government has said that it has so far provided nearly 18 crore vaccine doses (17,93,57,860) to States/UTs free of cost. “Of this, the total consumption including wastages is 16,89,27,797doses (as per data available at 8 am today),” noted the Ministry. – Bindu Shajan Perappadan

Stricter COVID curfew in Uttarakhand from May 11-18

In a bid to check the coronavirus spread, the Uttarakhand government imposed a stricter curfew from May 11 to 18, reducing opening hours for shops dealing in essential services and restricting the number of people at social gatherings to 20.

Shops selling essential items like milk, vegetables, fruits and meat will be allowed to open from 7 am to 10 am daily. Till now, these shops opened from 7 am to 12 am daily.

Grocery shops will be permitted to open on May 13 only. Mediapersons will have the permission to move around during the curfew if they have their IDs with them.

People coming from outside the state will have to bring a negative RT-PCR report, not older than 72 hours.

Departments providing essential services will open with attendance of only 50 per cent of their staff during the period.

People have been advised to defer marriages if they can. Not more than 20 persons will be allowed to gather for marriages or funerals during the period.

After recording over four lakh fresh cases for four consecutive days, India witnessed a single-day rise of 3,66,161 COVID-19 cases on Monday, which pushed its tally to 2,26,62,575, according to the health ministry.

The death toll due to the viral disease climbed to 2,46,116 with 3,754 more people succumbing to it, the ministry’s data updated at 8 am showed.

The number of active cases of the coronavirus infection in the country has gone up to 37,45,237, accounting for 16.53 per cent of its total caseload, while the national COVID-19 recovery rate was recorded at 82.39 per cent.

The number of people who have recuperated from the disease has climbed to 1,86,71,222, while the case fatality rate was recorded at 1.09 per cent, according to the data.

India humanitarian air bridge is in place between Dubai and nine major cities in the country to transport urgent COVID-19 medical and relief items.

Also read: Explained | What is being done to bridge medical oxygen demand and supply?

Delhi, Kolkata, Mumbai, Ahmedabad, Bengaluru, Hyderabad, Chennai, Kochi and Thiruvananthapuram are the designated cities for the initiative taken by Emirates’ to support India in its fight to control the second wave of the pandemic.

The first oxygen express train  to Karnataka has left from Jamshedpur in Jharkhand on Monday. The train carrying 120 tonnes of liquid oxygen will reach the Container Corporation India, Whitefield in the city, on Tuesday, May 11, 2021. 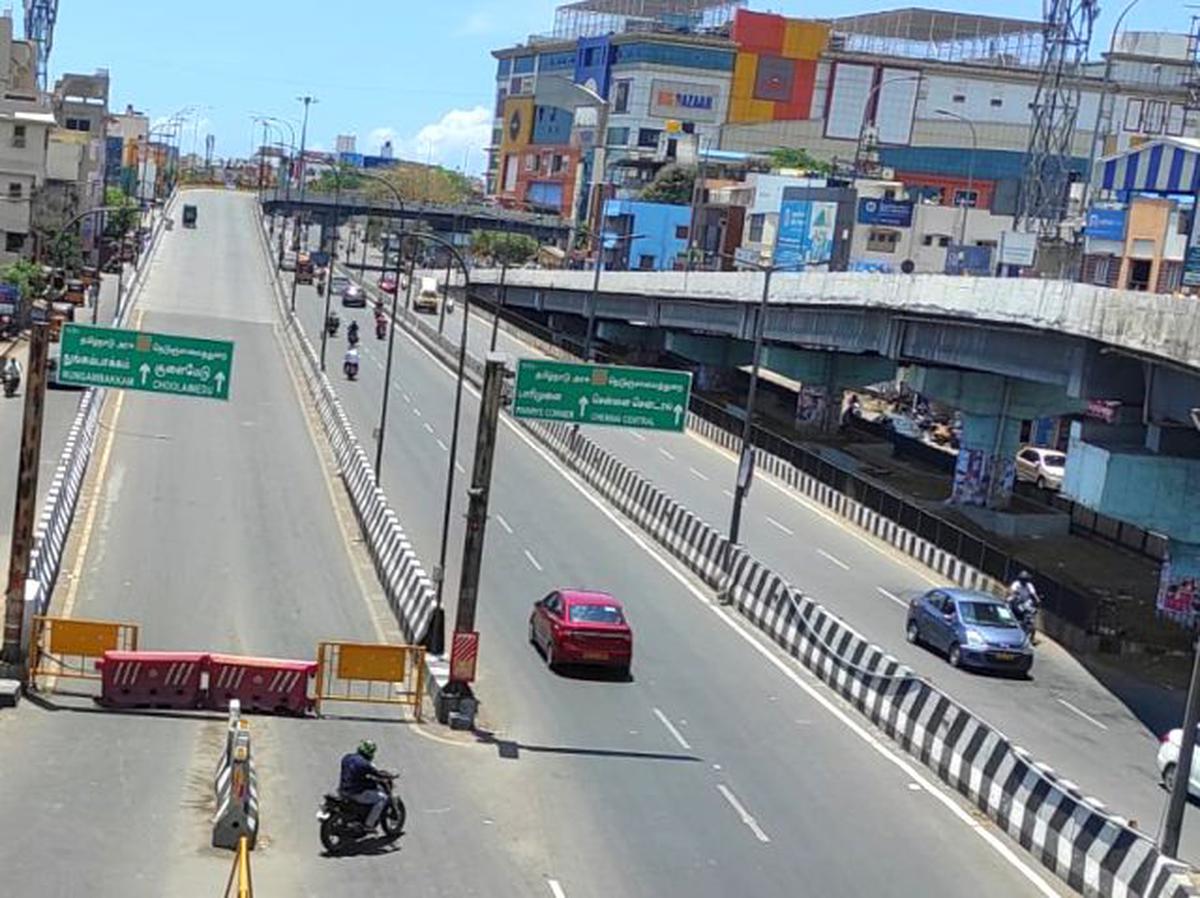 A view of the deserted flyovers at EVR Salai in Chennai on Monday, May 10, 2021.

With the total lockdown coming into force on Monday, May 10, 2021, the Chennai City traffic police have closed more than 35 flyovers in the city prohibiting the vehicle traffic movement. More than 10,000 police personnel will be deployed in the city and over 200 check points set up to enforce the complete lockdown in the city. People travelling for weddings of close relatives, funerals, job interviews and hospitals would be allowed on production of relevant documents.

The Defence Ministry has issued an order to the Directorate General Armed Forces Medical Services (DGAFMS) for the recruitment of 400 retired medical officers of the Army Medical Corps (AMC) and the Short Service Commission (SSC), amid the second wave of the COVID-19 pandemic.

Medical officer released between 2017 and 2021 are expected to be recruited on a contract basis for a maximum period of 11 months, a Ministry statement said.

Police crack down on inessential travel

The Kerala police actively dissuaded inessential travel on the second day of the COVID-19 lockdown on Sunday.

Officers flagged down vehicles and challenged passengers to state their reason for travel. The clampdown will continue till May 16. The police allowed people with appointments at hospitals and COVID-19 vaccination centres.

Tejasvi Surya, MP for Bengaluru South, has launched a bank of oxygen concentrators to aid in the treatment of COVID-19 patients in the city. Presently, the bank, MP Oxy Bank, has 250 oxygen concentrator units and will be soon expanded to 650 units, Mr. Surya said.

Age no bar in Latur couple’s triumph over COVID-19

The third week of March proved to be Suresh Chavan’s summer of disquiet: five members of his family including his wife and two children had tested positive for COVID-19. But he was especially disconcerted when his centenarian father Dhenu Chavan and his nonagenarian mother, Motabai contracted the virus and were suffering from high fever.

As the lethal second wave of the pandemic began engulfing rural Maharashtra, many in the village of Katgaon Krishna Tanda (around 18 km from Latur city) feared the end was near for their beloved and venerated residents — 105-year-old Dhenu and 95-year-old Motabai.

(With inputs from our Correspondents and agencies)