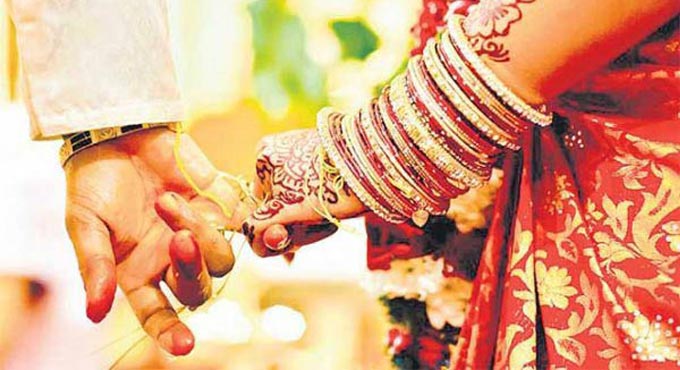 In view of the raging pandemic, the Vedic Brahmins’ Sangam adopts a resolution requesting people to defer wedding to June

Suryapet: That Covid is wreaking havoc with people’s lives is an understatement. Even as the world grapples with the pandemic, thousands involved in varied professions are at their wits’ end. One such community is that of purohits, who go about fulfilling their professional obligations, especially during this marriage season.

However, this time around things are different. In view of the increasing Covid-19 cases in the district, Vedic Brahmins’ Sangam of Suryapet district has appealed to the people to avoid performing weddings in May as there are only nine auspicious days (muhurthams) in the next 20 days, and postpone them to June. The executive body meeting of the Sangam adopted a resolution making an appeal to the people in this regard.

The Sangam office-bearers also submitted a memorandum to District Collector T Vinay Krishna Reddy urging him not to issue permissions for marriages till the month end in the district. They took the decision after several purohits got infected with Covid after performing marriages and other rituals in the recent past.

Nearly 20 purohits tested positive in Suryapet town alone. In some cases, they tested positive after attending rituals performed by families following the demise of their loved ones.

Speaking to Telangana Today, Suryapet district president of Vedic Brahmins’ Sangam Manthramurthi Shankara Murthi said purohits should not boycott their duty of performing marriages and other rituals for continuation of Hindu traditions.

As such, the Sangam was urging people to postpone weddings planned in May, to June keeping in view the safety of their relatives as well as purohits. “The pandits, apart from performing marriages, also complete other related rituals. During a marriage, at least 20 relatives of the bride and the groom stand close to the purohit. This only increases the possibility of infection,” he said.

Another pandit, on the condition of anonymity, said, on May 7 at a pre-wedding function in Suryapet, 200 people were present though permission was only for 30. “No social distancing and Covid safety norms were followed by them,” he deplored.

The Sangam’s Nalgonda district president G Lakshminarsaiah Sharma said generally 20,000 to 30,000 marriages were performed in the month of May in Nalgonda district. In some cases, muhurthams are fixed at least three months in advance and families prefer to go ahead with marriages. “In such cases, a purohit cannot refuse to perform the marriage as he would have been involved in the engagement rituals and even in the fixing of muhurthams,” he said

He said it was deplorable that some of the relatives of those who died of Covid, were not revealing to the purohits, that they (relatives) were infected with the virus and were still inviting the purohits for the 10th day ceremonies. “It is a very difficult time for purohits to carry out their professional duties,” he said.