Marx and Marxism in Modern Times 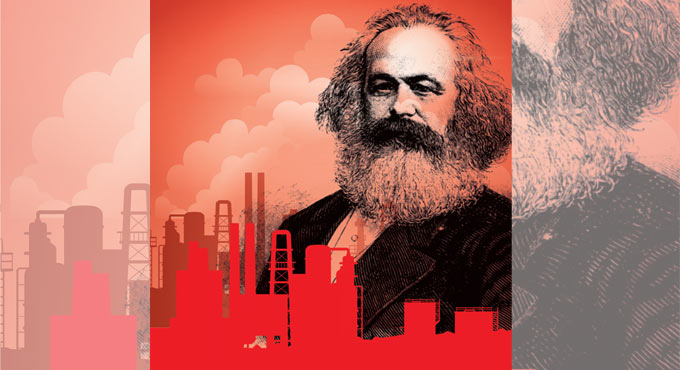 Developing crisis of capitalism, growing economic and power imbalances and the resultant environmental crisis take us to Marx

May 5, 2021, marked the 203rd birth anniversary of Karl Marx, considered as “one of the greatest thinkers in human history”. Marx was born in Germany, but due to his political publications and activities, he had to live in exile most of his life. He was exiled from his native country in 1849. After spending a few months in France, he settled in London with his family. In London, Marx was provided financial help by Friedrich Engels, his collaborator for his entire political career, that made it possible for Marx to do research and write. Marx died on March 14, 1883, in London.

Marx authored many books (several with Engels) on diverse subjects of dialectics, material conception of history, class conflict, labour theory of value, surplus value, exploitation and alienation. His most influential works are The Communist Manifesto and Das Kapital. Marx was able to write and publish only the first volume of Das Kapital. Based on Marx’s copious notes, the second and third volumes were edited by Engels after Marx’s death.

The main thrust of Das Kapital is to reveal the economic patterns underpinning the capitalist mode of production. The Communist Manifesto, published in 1848, provides an analysis of the internal conflicts of capitalism, focusing on the class-struggle between labour and capital. The Manifesto has become one of the most important documents influencing revolutionary movements the world over.

A famous quote of Marx reflects his critique of his contemporary thinkers: “Philosophers have only interpreted the world in various ways. The point, however, is to change it.” Classical political economists such as Adam Smith and David Ricardo provided a historical understanding of the decline of feudalism and the emergence of bourgeoisie during the period of the industrial revolution in Europe. But for most of the economists in the classical political economy tradition, history stopped once the transition towards capitalism was accomplished. For Marx, even capitalism was a transitory phenomenon.

Marx contended that capitalism was prone to systemic crises and internal conflict between the bourgeoisie and the proletariat. According to him, these contradictions within the system would ultimately lead to the breakdown of the capitalist system and replacement of capitalism by a higher economic mode of production called socialism. A very distinctive aspect of the Marxist theory is that in addition to the examination of the existing capitalist system as such, it provides tools to understand the dynamic and historical process of the transformation of the capitalistic mode of production.

The conventional wisdom that has been developed by the neoliberal politicians and intellectuals of the Global North about the advantages of neoliberal policies came under severe criticism after the outbreak of the global financial crisis of 2008. The ideology of neoliberalism posits that the only hope for prosperity for the people of the Global South lies in opening up all the markets (and even the social and cultural spaces that have traditionally not been part of the market) for capital, domestic as well as foreign. The deregulation of capital in the name of free market has given birth to multiple threats in developed as well as developing countries that have not been the subject matter of mainstream economics.

The failure of neoliberal capitalism and the growing economic and power imbalances in the world economy suggest that it is time for Marxist scholars to build a consensus and rethink the political economy of global capitalism by paying adequate attention to new existential crises – the environmental crisis, the growing threat of nuclear war, and the threats from new dangerous technologies.

The influence of Marx’s ideas, already popular in parts of Europe in his lifetime, became a global force to be reckoned with by the victory of Bolsheviks in the 1917 Russian Revolution. The Russian Revolution was the first revolution in the world that established a socialist state in a country. The 1917 Revolution gave a huge impetus and encouragement to anti-colonial movements across Asia, Africa and Latin America. It gave hope to millions of people engaged in national liberation struggles across the globe that it was possible to score a victory against the capitalist imperialist forces and to establish a social system in their societies based on the principles of freedom, equality and justice.

The collapse of socialism in the Soviet Union and Eastern Europe, the doctrinal changes in China after Mao and the revival of capitalism in many other erstwhile socialist countries clearly point to the fact that linear progression towards socialism has not proven to be possible. The Communist Party of China (CPC) makes abundant use of Marxist phraseology. The CPC’s official ideology – Socialism with Chinese characteristics – is claimed to be based on the Marxian philosophical concept of ‘dialectical materialism’. It, however, needs to be understood here that ‘class-struggle’ is the essence of Marxian politics. The socialist rhetoric used by the communist leadership, however, does not point to any class-struggle being waged in Chinese society.

In the case of Russia, even this debate – capitalism Vs socialism – does not exist. All this, however, does not automatically lead to the conclusion that socialist experiments in many countries have all been worthless and without any positive contribution.

The most significant contribution made by the Soviet Union to world history is that it saved the world from Hitler. During World War II, the Soviet Union suffered the most destruction and casualties at the hand of the Nazi war machine. The Soviet Red Army played the most important role in the defeat of Germany. Although in the public memory it may not be acknowledged now in the West, the fact remains that the Soviets played the most crucial role in ending the menace of fascism in Europe.

For about four decades during the Cold War era, the Soviet Union was able to provide a counterbalance to the US and other Western powers. Just four years after the American bomb, the Soviet Union succeeded in producing its own nuclear weapon. This fast catching up in the area of mass destruction technology was the primary reason why America was not able to use nuclear weapons in its wars in Korea, Vietnam and other places during the Cold War period.

Even after the collapse of the Soviet Union and despite the devastating experience of the nineties, Russia – with a much smaller population base compared with the US and Europe – continues even today to match the military might of the US. With seven decades long continuity in maintaining military balance with the West, the Soviet Union’s (and now Russia’s) historic role in preventing the Third World War so far should be considered nothing but phenomenal.

Socialist planning played a very important role in the economic and political history of many countries during the last century. Detailed theoretical and practical constructs of socialist planning were first designed and developed and put in practice in the Soviet Union during the 1920s and 1930s. These ideas spread not only to socialist countries in Eastern Europe and China where there were repeated attempts to replicate them but also influenced economic institutions and economic policies in countries following capitalist path or mixed economy models (such as the US, Japan, France and India).

It is true that most countries which experimented with these ideas have now abandoned them. But the developing crisis of capitalism in many parts of the world and the environmental crisis affecting the whole world may create conditions that necessitate the adoption of socialist planning ideas.

The phase of unipolarity has ended and a new world order characterised as multipolar is emerging. It represents a fundamental break from the last several centuries’ long history of European domination. In the global transformation that is underway, the role of China has been the most crucial. China’s rise in recent years as a major power is the main causal factor behind the global transformation towards multipolarity. A multipolar world provides some space for independent action to other nation-states. And this is true even for major powers such as India and Turkey.

The most significant aspect of the geopolitical reality today is that imperialism is becoming increasingly aggressive. Although it is true that Western imperialism faces new unprecedented challenges in the form of emerging multipolarity in world affairs, it, however, remains a threat to world peace as ever. The fears posed by Western powers are the reason why the vast majority of the global population is unable to choose paths of living of their own choice. The responsibility to provide counterbalance today to the Western powers majorly falls on the shoulders of Russia and China in the same way it did during most of the twentieth century.

Like the Soviet Union during the Cold War era, Russia today is able to provide a counterbalance to the US in military terms. Despite very close relations with China, Russia is the main proponent of multipolarity in world affairs. Russia has acted very forcefully and decisively against Western designs in many places, such as Syria. There are many countries, such as Iran and Venezuela, which are victims of US aggression in the forms of economic sanctions and even threat of direct military action. These countries invariably turn to Russia for support not only at the United Nations Security Council but also in the forms of direct material assistance.

It is true that by no stretch of the imagination, Russia can be called a socialist country today. But, on the other hand, no one can deny the fact that all the strength the Russian state is able to display today on the international stage has its genesis in its socialist past.