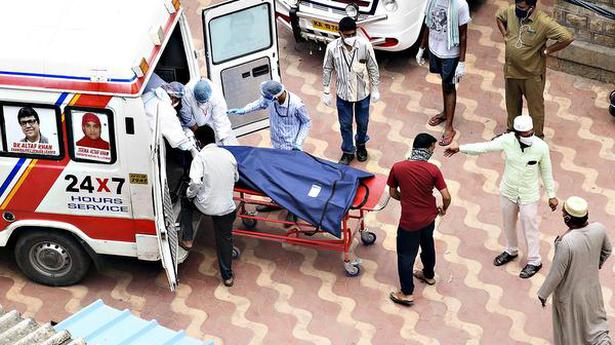 India recorded more than 4,000 new COVID-19 related deaths for the first time on a single day, with 4,197 fresh fatalities on May 7.

About 24.59 lakh daily vaccine doses were administered in the country in the 24 hours ending 7 a.m. on May 7, about 4.4 lakh doses higher than what was recorded in the previous 24 hours. However, the number of daily doses has been on a declining trend since mid-April. The seven-day average of daily doses administered by May 6 stood at 18.18 lakh, significantly lower than the 31.31 lakh recorded a month ago.

Kerala went into lockdown at 6 a.m. today as part of efforts to contain the spread of COVID-19.

People have been asked to remain indoors and avoid inessential travel. The police have introduced a slew of measures for the strict enforcement of the restrictions, which will be in effect till May 16. Vigil has been stepped up along the inter-district borders as well.

The police will issue passes for essential travel. The online system for issuing the passes will come into effect by May 8 evening, police officials said. Citizens can also call the helpline number 112 in emergencies.

The State Labour department’s decision to chalk out an action plan specifically for migrant workers has proved timely with a State-wide nine-day lockdown kicking in on May 8 morning.

The plan submitted by the department for the wellbeing of the migrants and subsequently approved by the government envisaged three different scenarios of which one was a State-wide lockdown. The other two possibilities were the controlled and uncontrolled spread of the pandemic with no lockdown.

Camps under the direct supervision of the district administration are proposed to be established and run with the help of the local bodies, which will use their own funds to operate community kitchens to feed the inmates. Camps managed by labour contractors, by converting rented buildings of migrants into camps, and treating scattered shelters as camps have also been proposed.

Traders have sought help from the government to cope with losses.

A police spokesman said since the outbreak of second wave of Coronavirus, the J&K police had enhanced their efforts to sensitise the masses on the highly contagious disease.

“A slew of measures, including restrictions under Section 144, have been put into place to contain the spread of COVID-19,” the police said.

The police on Friday arrested 43 persons, lodged 12 FIRs and also realised fines to the tune of ₹70,010 from 480 people for violating the guidelines.

America’s corporate sector is sending more medical assistance to India, including ventilators and oxygen concentrators, to help the country fight the deadly second wave of COVID-19 that has been infecting more than 4,00,000 people every day in recent days.

Thermo Fisher with the help of United Airlines on Saturday sent the much-needed supplies to India to help expand the COVID-19 testing, the company said.

“We are humbled to be able to help our colleagues in India, & the population as a whole in their efforts to get the COVID-19 surge under control,” it said.

K. K. Sivan, Kochi corporation councillor and a leader of the CITU in Ernakulam, died of COVID-related complications here on Saturday morning. He was 55.

His battle with COVID was a protracted one, according to Mayor M. Anilkumar. He had tested positive on April 19 and was initially recovering at the COVID care centre at PVS Hospital before he was shifted to a private hospital, and was in the ICU. Although he seemed to be getting better initially, he was placed on a ventilator two days ago, the Mayor said. He was diabetic and had high creatinine levels.

Sivan served as a Kochi corporation councillor twice. He represented Ponnurunni East in the council that was elected in 2005, and was elected from Gandhinagar in the elections last year.

Chief Minister Arvind Kejriwal on Saturday appealed to the Centre to approve a COVID-19 vaccine for children, in addition to requesting more doses for the Capital even as the Delhi government was in the process of tripling the number of schools where these were being provided to citizens.

An estimated 1 lakh COVID vaccine doses were being administered across the city on a daily basis, he said, adding that many citizens were also coming to the Capital for their shots. “We are going to triple the number of schools where COVID vaccination is being done in Delhi, bringing this to around 250 to 300 over the coming days,” he told a digital briefing.

“We are especially concerned about the health and welfare of children; I appeal to the Centre to identify a vaccine which can be administered to children at the earliest,” he added.

Ruling party Janata Dal (United) legislator in Bihar Narendra Kumar Neeraj alias Gopal Mandal has been booked for allegedly removing a barricade at a containment zone near Naugachhia railway station in Bhagalpur. He claimed he had an “urgent call of nature”.

“Humko bahut jor ka paikhana laga tha aur bhookh bhi [I had a great urge to relieve myself and also felt hungry],” the third-term MLA was heard saying in a viral video on social media when asked why he removed the barrier.

He further said in the video that ambulances too had to cross the area for getting patients admitted to hospitals in Bhagalpur.

“I acted on humanitarian grounds as well”, he said. He removed the barricade on May 4.

B. Jagadeesh Kumar, the accused, was allegedly involved in the illegal sale and black marketing of medical oxygen cylinders at M/s Moray Smart Solutions at MVP Colony in the city. According to K. Rajitha, Assistant Director, DCA, Visakhapatnam, based on information received from the Director General, DCA, Guntur on Friday, a decoy operation was conducted.

Actor Kangana Ranaut revealed on Instagram that she has tested positive for COVID-19.

The Thalaivi star posted a picture of herself practising yoga and wrote that she was planning a trip to Himachal, and hence took a test.

Former India hockey player and a member of the 1980 Moscow Olympics-winning side, Ravider Pal Singh, died on Saturday morning in Lucknow after battling COVID-19 for nearly two weeks. He was 65.

Singh was admitted at the Vivekananda Hospital on April 24 after contracting the deadly virus.

According to family sources, Singh had recovered from the virus and was shifted to non-COVID ward on Thursday after testing negative.

Two-week lockdown from May 10 in Tamil Nadu

The Tamil Nadu government on May 8 imposed a complete lockdown (with few relaxations) for two weeks across the State between 4 a.m. on May 10 and 4 a.m on May 24 to combat the spread of COVID-19.

The State government said there would be no restrictions across the State between 6 a.m. and 9 p.m. — shops will function during this period — on May 8 and 9 to allow the public to prepare ahead of the complete lockdown.

Inter-district and intra-district vehicular movement (including public transport) will remain suspended during the lockdown, except for essential travel.

Except for those involved in food delivery, other e-commerce companies would not be allowed to function.

Details about all restrictions here.

India can avoid a third COVID wave, Principal Scientific Advisor to the Government of India K. VijayRaghavan said on Friday, stressing that, “If we take strong measures, the third COVID wave may not happen in all the places or indeed anywhere.”

Dr. VijayRaghavan’s statement comes just two days after he said, “Third COVID wave is inevitable in India given the high levels of virus that is circulating. But it is not clear at what time scale this Phase 3 will occur.”

Speaking at a Health Ministry press conference, Dr. VijayRaghavan said preventing a third wave depends on how effectively the guidelines are implemented and followed. “Infections rise when the virus has the opportunity to infect humans,” he added.

The first lot of vaccines were procured by the Centre using PM CARES funds at a higher rate than the subsequent rounds paid for by budgetary allocations, The Hindu has learnt from the response to a Right to Information request by a transparency activist.

The Health Ministry response said that the initial 5.6 crore doses of Covishield were bought at a pre-tax price of ₹200 and one crore dose of Covaxin at ₹295, but Finance Secretary T.V. Somanathan said both vaccines were, in fact, bought at around ₹200 only.

This is higher than the current ₹150 rate at which both vaccines are now sold to the Centre. Dr. Somanathan told The Hindu that bulk orders, advance payments and a lower demand situation had helped in negotiating for the lower rate, “which may not be replicable” for future orders by States or others.

Nod for cash payment for COVID bills of over ₹2 lakh

The government has notified changes to the Income Tax Act to allow cash payments of over ₹2 lakh for COVID-19 patients’ treatment at hospitals, dispensaries, nursing homes, COVID care centres or other similar medical facilities.

The provision to bar cash payments over ₹2 lakh was introduced in 2017 as an attempt to curb black money flows, following the demonetisation exercise that began in November 2016. A 100% penalty is levied on any person who has received such a sum in cash. Several COVID-19 affected families, who had no access to digital banking facilities, had been struggling to pay their hospital bills due to the rule.

For desperate families, who have no other source, gold has become the mythical sanjeevani (panacea) to raise the much-needed funds for medical treatment.

“Yes, for the past one month there is a steady increase of people who are pledging gold ornaments for treatment. When they say they want money for treatment, I’m giving money at a very low rate of interest,” said a jeweller from Secunderabad.

“Selling land is a long process which might take months or at least weeks and gold has come to the rescue of my family. We paid more than ₹10 lakh for treatment of three persons,” said, Yalamanchili Ramu (name changed) from Gayathri Hill who sold 30 tola (one tola equals 10 grams) of family jewellery for the treatment of his mother, daughter and himself who were admitted to a corporate hospital in Secunderabad.

In order to minimise errors and inconvenience caused to citizens registering for COVID vaccination, the CoWIN system will introduce a new feature — a four-digit security code — in its platform from May 8, the Health Ministry has said.

“It has been noticed in some instances that citizens who booked their appointment for COVID vaccination through the CoWIN portal did not actually go for vaccination on the scheduled date but received a notification through SMS that a vaccine dose has been administered to them. Upon examination, it has been found to occur largely on account of the vaccinator wrongly marking the citizen as vaccinated, an instance of a data entry error by the vaccinator,” noted the Ministry.

The added feature now is to minimise these errors. The Ministry said that after verification if the beneficiary has been found as eligible, before administering the vaccine dose, the verifier/vaccinator will ask her the four-digit code and then enter it in the CoWIN system to correctly record the vaccination status.